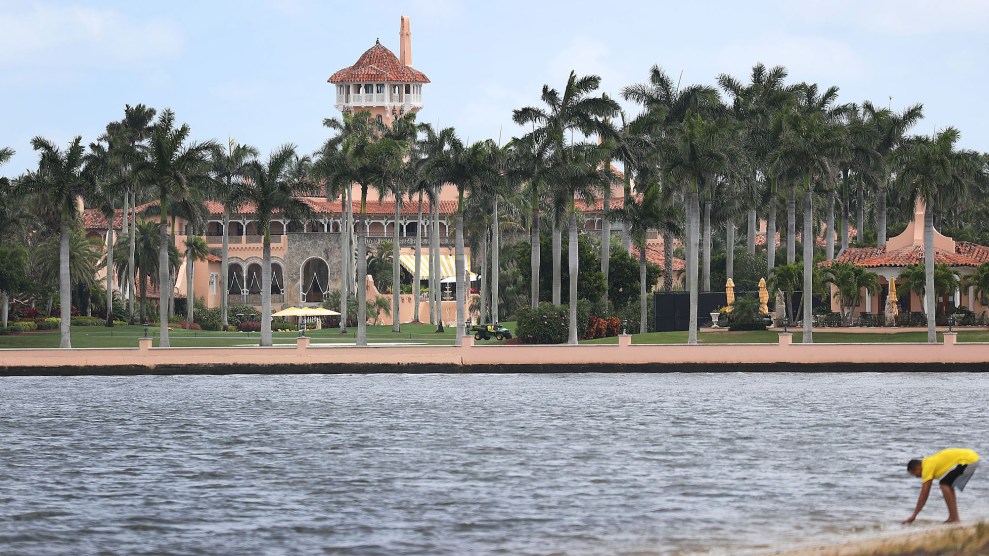 Three senior Senate Democrats want the FBI to evaluate the national security risks posed by vulnerabilities at Mar-a-Lago in the wake of the recent arrest there of a Chinese national, Yujing Zhang. Zhang had allegedly gained entry to Donald Trump’s private resort while carrying electronics that included a thumb drive containing malware. Trump and members of his family were visiting Mar-a-Lago during the weekend when the incident occurred.

“This latest incident raises very serious questions regarding security vulnerabilities at Mar-a-Lago, which foreign intelligence services have reportedly targeted,” Senate Minority Leader Chuck Schumer (D-N.Y.), Senate Intelligence Committee Vice Chairman Mark Warner (D-Va.), and Sen. Dianne Feinstein (D-Calif.), the ranking member of the Senate Judiciary Committee, wrote in a letter Wednesday to FBI Director Christopher Wray. “The apparent ease with which Ms. Zhang gained access to the facility during the President’s weekend visit raises concerns about the system for screening visitors, including the reliance on determinations made by Mar-a-Lago employees.”

The senators requested that the FBI, “in consultation with the Director of National Intelligence, assess the risks at Mar-a-Lago” resulting from Trump’s decision to install facilities and equipment to access classified information while vacationing there. They also urged the FBI to work with the Secret Service to determine “steps needed to detect and deter adversary governments or their agents from attempting to gain access to or conduct electronic surveillance or acquire material at Mar-a-Lago or President Trump’s other properties.”

Trump has brushed off complaints that his decision to continue to visit and profit from Mar-a-Lago, where he is known to mingle with guests who receive limited vetting, creates a massive opportunity for foreign spies and a major conflict of interest, since guests seeking to influence his policy decisions can pay lavish membership or event fees to visit the property.

On Monday, federal prosecutors in Florida charged Zhang with unlawfully entering a restricted area at Mar-a-Lago on March 30. They also charged her with making false statements to federal agents about her presence at the club. According to an affidavit filed by a Secret Service agent, Zhang arrived at the club, showed a security officer two Chinese passports, and claimed she was there to visit the pool. Believing she was a relative of a Mar-a-Lago member, club personnel admitted her. Once she was inside, Zhang’s story apparently changed. She told a receptionist she had come to the club for an event held by the “United Nations Chinese American Association.” No such event was scheduled, and the receptionist summoned Secret Service agents.

Zhang was detained and transported to a Secret Service facility, where she “claimed her Chinese friend ‘Charles’ told her to travel from Shanghai, China to Palm Beach, Florida, to attend this event and attempt to speak with a member of the President’s family about Chinese and American foreign economic relations.” As Zhang was questioned, according to this filing, the Secret Service found the four cellphones, the computer, an “external hard drive type device,” and the thumb drive containing malware.

Zhang’s attempt to enter Mar-a-Lago coincided with an event scheduled for that night that had been promoted by Cindy Yang, the Chinese American massage parlor entrepreneur who ran a company called GY US Investments that claimed to be able to provide opportunities to “interact” with “the president, the [American] Minister of Commerce and other political figures.” The featured speaker at this event, which the website called the “International Leaders Elite Forum,” was Elizabeth Trump Grau, the president’s sister.

According to the Miami Herald, a “Safari Night” event, headlined by Trump Grau, was supposed to take place at Mar-a-Lago that same evening but was canceled after media reports about Yang and her activities. It’s unclear whether the “Safari Night” and the “International Leaders” forum were the same event, but the Miami Herald has reported that Yang has repackaged existing Mar-a-Lago functions to appeal to a Chinese audience. The Herald reported that Charles Lee, the founder of a group called the United Nations Chinese Friendship Association, had bundled Yang’s 2018 Safari Night invitation into an eight-day “business travel diplomacy package” that cost $13,000 and included visits to the United Nations, Congress, and Mar-a-Lago.

The Democratic senators cited Yang in their letter Wednesday, noting that the FBI has not responded to a March 15 letter from congressional Democrats asking Wray to launch “criminal and counterintelligence investigations into credible allegations of potential human trafficking, as well as unlawful foreign lobbying, campaign finance and other activities by Ms. Yang.” The Miami Herald reported Wednesday that the FBI is leading a federal investigation into possible Chinese intelligence operations targeting Trump and Mar-a-Lago. The report says the probe launched before news of Yang’s and Zhang’s activities had broken, but that investigators have since focused on the two women.

In a statement issued Wednesday, Evan Turk, an attorney representing Yang, said his client does not know Zhang. Turk also disputed reports tying Yang to Lee. “The Dr. Lee that has been mentioned in several articles was pictured with our client twice,” Turk added. “Beyond that, she states that she has no relationship with him. They were guests at the same event. That’s all. It seems that a lot of the media reports are recklessly inferring a relationship that simply does not exist.”

Update: The Secret Service will brief the leaders of the House Oversight Committee on Thursday morning about the security breach at Mar-a-Lago, that committee’s chairman, Rep. Elijah Cummings (D-Md.), told the Washington Post. House Intelligence Committee Chairman Adam Schiff (D-Calif.) also wrote to Wray on Wednesday. “The incident with Ms. Zhang raises grave counterintelligence and other concerns,” Schiff wrote. He asked Wray to respond to Democrats’ March 15 letter and address questions about security at Mar-a-Lago. The questions include what steps the Trump Organization is taking to prevent the collection of classified information at the club. “How do the imperatives of protecting that information conflict with revenue raising goals of the private club?” Schiff asks.