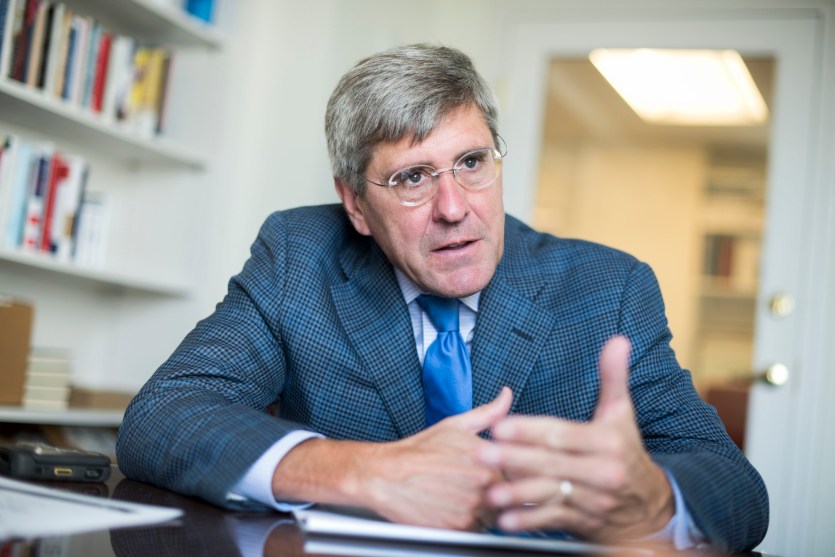 Earlier this decade, Stephen Moore, the economic commentator who is one of President Trump’s picks to join the Federal Reserve board, told right-leaning audiences that the working poor should pay more taxes, that Walmart benefits the poor more than the social safety net, and that income inequality can be solved by creating more billionaires.

The comments were made during a little-known appearance at a Citizens’ Council for Health Freedom fundraising dinner just after the 2012 election and in a July 2013 interview about his book at FreedomFest, a libertarian conference. At the 2012 fundraiser, Moore, who came under fire earlier this week for writing sexist columns about women working in high-level sports, also expounded about the “blonde… beautiful women” he’d met while appearing on Fox News.

At the fundraising dinner, Moore gave a wide-ranging 40-minute speech that touched on several economic topics. About halfway through, he explained his belief that “anybody in this great, great, great country of ours who is a citizen, who is a worker, and who is a voter… should pay some federal income tax,” garnering hearty applause.

Moore acknowledged that many low- and middle-income households pay payroll taxes, but said that they should also contribute at least $50 or $100 in income tax. To illustrate his point, Moore gave the audience a visual aid. Standing in the middle of the stage, he drew an imaginary line down the room with his arm. Imagine, he said, that everybody to his left is in the top 50 percent of income earners; everybody to his right, the bottom 50 percent. Now, the room was going to pay for the dinner they just ate “the same way we pay our income tax.” If they did that, everybody to his left would pick up 98 percent of the food tab, surmised Moore. Those on the right would pay only the remaining 2 percent—a hypothetical that elicited cheers from the half of the room relegated to the bottom.

What Moore’s hypothetical obscured is the extremely low incomes of people that pay payroll, but not income, taxes. Households aren’t required to pay federal income tax if their annual income is lower than that year’s standard deduction. In 2012, when Moore made this speech, the standard deduction was $5,950 for a single filer, $8,700 for single parents, and $11,900 for married households. In other words, Moore was advocating for people making less than those amounts to pay more taxes—while seemingly linking their ability to do so to their right to vote. (The federal poverty threshold for that year was about $15,000 for a family of two.) Moore did not respond to a request for comment left with the Heritage Foundation, where he currently works on economic issues.

In his speech Moore also spoke about the appearance of Greta Van Susteren and other women he’d met when visiting the studios of Fox News to provide on-air commentary—remarks first reported by the Washington Post. “People are always asking me, ‘What’s Greta really like?’ And I say, ‘Greta is absolutely perfect for Fox News. She’s fair, balanced, and blonde.’ And that is the philosophy of Fox News … One of the great things about working at Fox News: I have met a lot of beautiful women at Fox News. It’s a great place to work.”

“I have met a lot of beautiful women at Fox News.”

Moore outlined further thoughts on poverty in an interview on C-SPAN a year later about his book Who’s the Fairest of Them All? The Truth about Opportunity, Taxes, and Wealth in America. At several points, Moore downplayed the existence of poverty and income inequality. He said welfare programs that permit multi-year enrollments, including food stamps, have become “substitutes for work.” Moore added that poverty programs have in fact “created and really increased” poverty and intergenerational hardship—problems, he says, “we would not have if we had stuck with a system that is much more dependent on the free enterprise system.”

Later in the interview, Moore claimed that “Walmart has done more to lift the living standards of poor people than all the government anti-poverty programs over the last 50 years,” citing the retailer’s slogan of “everyday low prices” and a purported ability to buy “anything” at the store for 99 cents.

When asked whether income inequality is worth paying attention to, Moore said yes, explaining that Bill Gates and Warren Buffett had amassed fortunes of unprecedented size in the last several decades, concentrating wealth in the hands of a few. “What I worry about is there’s too much envy,” Moore explained, suggesting that the country can best alleviate the concentration of wealth by creating more billionaires like Gates, Buffett, or Apple founder Steve Jobs. Issues of “income distribution” Moore added, are the focus of too many policymakers. “My focus is, how do we make sure that everybody is better off?”