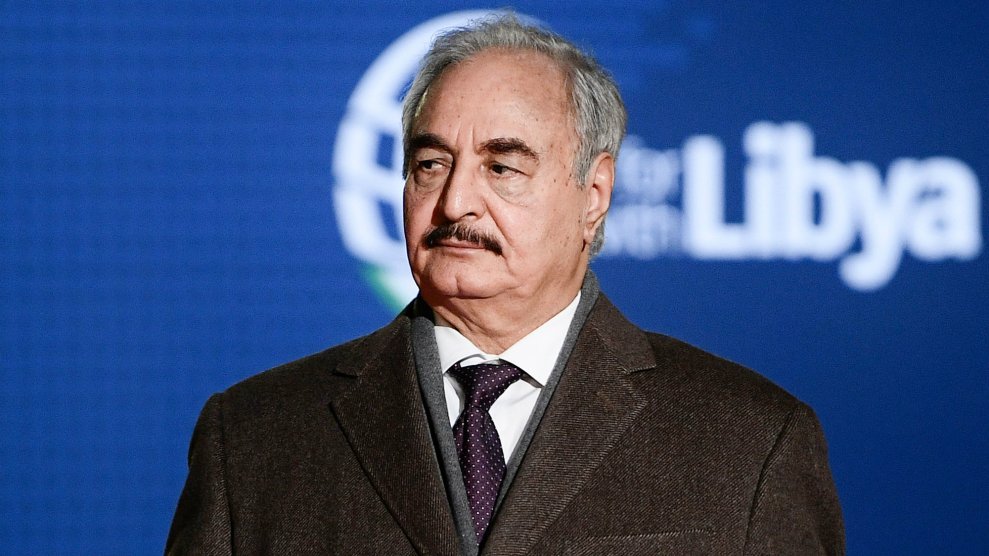 One month ago, the United States was supporting a United Nations–led plan to bring peace to Libya through a mediated agreement that presumably would unify the country under one government’s rule. Then Donald Trump hopped on the phone and called a warlord.

This presidential contact with strongman Khalifa Haftar, a general who has controlled the eastern part of Libya for roughly five years, further complicated the increasingly violent civil war brewing between militias allied with the UN-recognized government in Tripoli and those supporting Haftar’s Libyan National Army. The White House only revealed that the conversation took place four days after it happened—and eight days after Secretary of State Mike Pompeo urged an “immediate halt” to Haftar’s advance and denounced him for “undermining prospects for a better future for all Libyans.” Trump sounded a different tune with Haftar during their call, according to the White House. The two men discussed “ongoing counterterrorism efforts” and “a shared vision for Libya’s transition to a stable, democratic political system.”

Ben Fishman, a former Obama administration official who worked on Libya policy, tells Mother Jones that Trump’s call undermined “the traditional policy toward Libya, including in his administration over the past two years.”

Earlier this month, when Haftar launched a military offensive to seize the capital, the United States joined its allies in condemning the maneuver as a major impediment to peace in North Africa, which has been mired in conflict since the ouster of dictator Moammar Qaddafi in 2011. Three years ago, an interim government, called the Government of National Accord, was set up with backing from the United Nations, but its grip on power has been tenuous and rival factions have dominated the political process.

The United States has supported the UN’s peacemaking process and repeatedly sanctioned Libyans who “threaten the peace, security, stability, sovereignty” of the region. Peter Bodde, a senior American diplomat in Libya, reportedly even warned Haftar against moving on Tripoli, according to a report in Bloomberg. But Trump’s phone call all but abandoned that position. Bloomberg reported that Trump and national security adviser John Bolton gave Haftar the “impression of a US green light for an offensive” to topple the UN-backed government.

That sort of abrupt reversal has occurred several times during Trump’s two years in office. For instance, in December Trump announced the withdrawal of all American service members in Syria only a few months after his top aides vowed to maintain troops in the country indefinitely. Qatar, a country Trump accused in 2017 of being a “funder of terrorism,” became a key ally in “stopping the funding of terrorism” last year. “Even saying what the administration’s policy is on any given major issue is virtually impossible,” Jon Finer, former chief of staff to Secretary of State John Kerry, wrote for Politico early in Trump’s first year of office. “This is not just embarrassing, but dangerous.”

Haftar’s army has been accused of war crimes, including the burning of dozens of houses, throughout its campaign to seize control of several important oilfields in southern Libya. A former Qaddafi ally and military officer, Haftar portrays himself as an opponent of Islamist fundamentalism, but his ranks include a group of literalist Muslims known as Salafists. Despite his spokesman’s affirmation last week on Twitter that democracy “will return to our nation,” Haftar, who once said his homeland was “not ripe for democracy,” has shown little inclination toward ceding power to the people. His assault on the capital began during the same week UN Secretary General António Guterres was in Tripoli organizing a conference to broker peace among Libya’s warring militias. “I still hope it is possible to avoid a bloody confrontation in and around Tripoli,” Guterres said on Twitter after meeting with Haftar.

Despite Trump’s apparent endorsement of Haftar’s actions, Libya’s official government denied any change in US policy. “We deal with statements from the State Department and direct contacts with the American administration and the message is very clear: They are not pleased with the attack on Tripoli,” Prime Minister Fayez al-Sarraj told Bloomberg this week. A State Department official reiterated this view in a statement provided to Mother Jones. “We have voiced our deep concern at the highest levels about instability in Tripoli,” the official said. “All involved parties should return to the political process to provide a secure and prosperous future for all Libyans.” Acting Defense Secretary Patrick Shanahan said last week that the Pentagon and “the executive branch are well-aligned on Libya,” but even he refused to endorse Haftar’s military offensive. “A military solution is not what Libya needs,” he told reporters on April 19.

The US has had a long history with Haftar, who in the 1980s turned on Qaddafi and assisted a failed CIA-backed effort to oust him. Haftar then fled to Virginia, where he lived for two decades. Upon his return to Libya, where he raised an army, US government officials, including the special envoy to Libya, communicated with him, but he consistently refused to accept a role such as commander of the military under civilian control. After establishing a truce with the UN-backed government in the west, Haftar ended the uneasy peace earlier this year by crafting a deal to take over a major Libyan oil field, the New York Times reported. Tripoli, home to the central bank and state-owned oil corporation, was an obvious next step in what Fishman describes as Heftar’s “effort toward total control of the country.”

Saudi Arabia, Russia, France, and the United Arab Emirates have extended implicit—and in some cases explicit—support to Haftar, who has courted international allies with the assurance that he would provide stability to a combustible region. His international backing was clear at a UN Security Council meeting last week, where a proposal to demand a ceasefire flopped amid apparent opposition from Russia and the United States.

What Trump stands to gain from a protracted conflict isn’t clear. “I do not see a role in Libya,” he said three months after taking office. “I think the United States has, right now, enough roles.” According to the White House description of the conversation, Trump discussed counterterrorism and oil production with the Libyan strongman. (The price of oil is a topic of particular fascination to Trump and, as in previous conflicts, oil production could be negatively affected.) But as Haftar struggles to gain ground against a motley assortment of militias aligned against him, the “continued campaign may only prolong the country’s instability,” the New York Times reported. At least 20,000 civilians have already been displaced by the fighting and some of Haftar’s forces have been pushed roughly 40 miles out of the city. Amid all the chaos, Trump’s decision to call the general seems even more baffling.

“It was surprising, to say the least,” Fishman says.