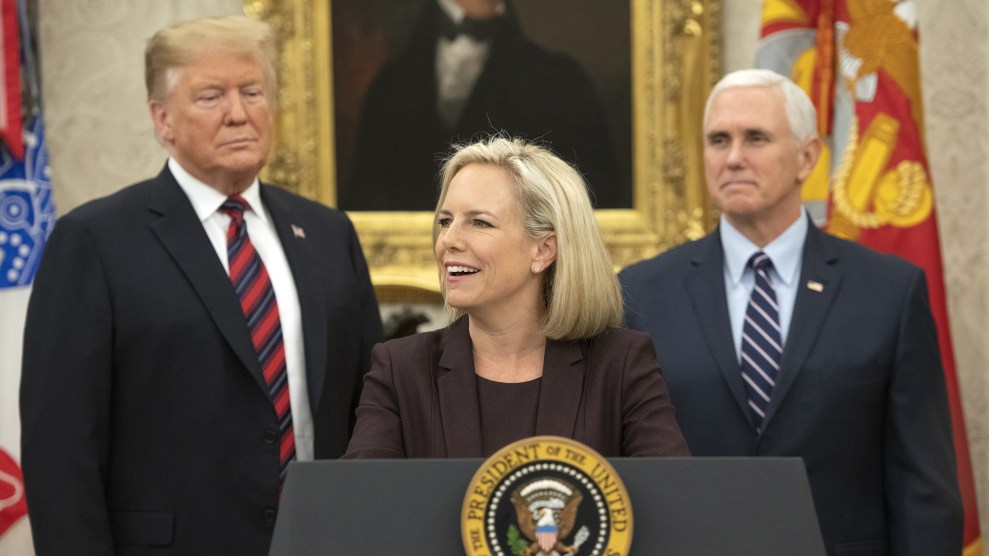 Homeland Security Secretary Kirstjen Nielsen is officially out of a job as of Sunday afternoon, after a tumultuous 16-month tenure that made her a public face of the Trump administration’s immigration crackdown. Nielsen’s resignation came just days after President Donald Trump withdrew the nomination of Ronald Vitiello to lead the Immigration and Customs Enforcement agency—a move that Nielsen was reportedly blindsided by.

Trump confirmed the news in a tweet Sunday evening, revealing that the current head of Customs and Border Protection, Kevin McAleenan, will now serve as acting DHS secretary:

….I am pleased to announce that Kevin McAleenan, the current U.S. Customs and Border Protection Commissioner, will become Acting Secretary for @DHSgov. I have confidence that Kevin will do a great job!

Nielsen’s tenure will be remembered above all for the family separation policy, an outgrowth of then-Attorney General Jeff Sessions’ policy of “zero tolerance” on prosecuting people who come across the border. When the effects of the policy began to ripple through the press—the New York Times reported in April 2017 that more than 700 kids had been separated from their parents, with more than 100 younger than four—Nielsen at first denied that any such family-separation policy existed:

We do not have a policy of separating families at the border. Period.

But subsequent reporting found that family separation was not simply a side-effect, but a deliberate decision—separating small children from parents, the administration hoped, would discourage families from coming across. Not only did Nielsen’s team make it a policy priority to separate children from parents, their actions put those children in horrific conditions, and they failed to keep track of the families they separated, making it difficult to reunite parents and children later on.

“Under the present system, migrant children are not accounted for with the same efficiency and accuracy as property,” a federal judge in San Diego wrote last year, in a decision that put Nielsen’s policy on hold.

On Friday, the administration said it may take up to two years to identify all the families separated under the policy.