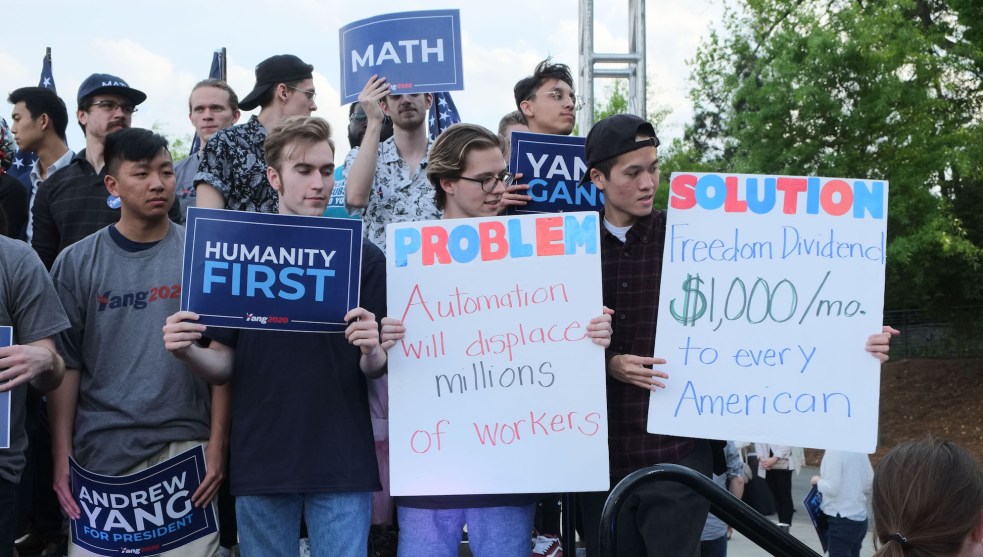 Supporters of Andrew Yang gather at an Atlanta rally for the candidate. John Arthur Brown/ZUMA Wire

April 15, the day tax returns are due to the IRS, is always an easy moment for politicians to grandstand about their plans to change how the government collects money. And on this year’s Tax Day last Monday, long-shot presidential candidate Andrew Yang hosted a rally on the steps of the Lincoln Memorial to push for the central plan of his 2020 campaign: offering a “universal basic income,” a monthly payment of $1,000 to every adult in the country.

“I was drawn to his campaign because I am one of many freelancers who needs a dependable tomorrow,” said Rachel Spellman, a local artist and “Yang Gang” member, before Yang took the stage. Another supporter, Dave Han, put it more bluntly: “No other candidate is going to cut that check. Andrew Yang will cut that check for all of us.”

Yang’s speech during his visit to Washington, DC, focused heavily on his Freedom Dividend, which would guarantee $1,000 a month in cash payments to every US citizen over the age of 18. Unlike existing welfare programs that are bound by means testing and tax status, and restricted in use, UBI could offer Americans of all income levels cash assistance. “Our welfare programs are designed to be difficult. They’re not designed for the recipients top of mind,” Yang said in an interview with Mother Jones. “The truth is we just need to get more money into people’s hands and that’s what will improve people’s lives.”

But to receive UBI, citizens would have to choose between the $1,000 or any existing welfare benefits—potentially including Social Security, disability insurance, food stamps, and housing assistance. And it’s unclear whether Yang’s UBI would be worth that trade-off for many low-income families, instead leaving the program as a boost to middle- and upper-income people. Yang’s press secretary, Madalin Sammons, could not provide a “full list of programs…but health care is definitely not considered part of someone’s current benefits when talking about the Freedom Dividend.”

From a macroeconomic perspective—looking at how the plan would impact the economy as a whole—UBI would likely grow the economy, regardless of how much it costs or how you fund it. A study from the left-leaning Roosevelt Institute examined three UBI plans ($1,000 a month per adult, $500 a month per adult, or $250 a month per child), and researchers found that all three resulted in higher spending power for lower-income Americans. (Though the report, unlike Yang’s proposal, did not take into account people needing to give up other social safety benefits to qualify for UBI.)

“It would be a tremendous reorientation of the social safety net away from families with children.”

For welfare experts, this is where cash benefits can become a boon. “There are certain programs in place currently, which are deeply paternalistic, that tell the poor how to spend their money,” says Rakeen Mabud, a fellow at the Roosevelt Institute. “That paternalism, I think, goes away to some degree, when you replace some of those programs, the cash transfer program.”

“There’s a wealth of literature of the effectiveness of cash transfers over ad hoc [welfare] programs,” says Samuel Hammond, a researcher at the Niskanen Center who studies poverty.

Unlike welfare programs, UBI would also be much more straightforward to execute. “One of the issues we face is most people do not participate in every program they’re eligible for,” Elaine Maag, a senior research associate at the Tax Policy Center, tells Mother Jones. “In some cases, you might meet eligibility requirements but the program might not be fully funded.”

Because of uneven participation rates and funding, it can be difficult to directly compare how much the average welfare participant would gain or lose by taking a $1,000-a-month UBI instead of current safety-net programs. According to the Center of Budget and Policy Priorities, a single parent of two making the federal minimum wage would be eligible for $435 in food stamps per month. Temporary Assistance for Needy Families benefits vary by state, but according to CBPP research, benefits for a single-parent family of three can range from as little as $170 in Mississippi to $1,039 in New Hampshire. Social Security, while disproportionately benefiting seniors, also has an enormous reach in lifting families out of poverty: According to CBPP, Social Security annually lifts more than 1 million children out of poverty.

“Our pure welfare programs are not really generous to begin with now. So I don’t know how many people would lose benefits,” says Jesse Rothstein, a professor of public policy and economics at the University of California-Berkeley. “But it would be a tremendous reorientation of the social safety net away from families with children.”

In a February working paper co-authored with economist Hilary W. Hoynes, Rothstein found that while a “generous UBI” could replace the need for most welfare programs, it could also run the risk of redistributing funds away from the lowest-income families. The loss of disability benefits and Social Security would almost certainly put seniors and households with disabilities at a disadvantage.

“We certainly don’t want to just throw the baby out with the bathwater,” says Mabud of the Roosevelt Institute. “Cash is valuable in and of itself in reducing inequality. It certainly is not enough. We need more than just cash-transfer programs to help reduce what we’re seeing around the country.”

When asked if UBI should work with other economic policies, Yang expressed support for initiatives like a child tax credit. Yang also endorses paid family leave. “The only reason I advocate for UBI over other plans…is the timing of payment issues, bureaucracy. We’re putting people into better positions to succeed if we get them cash on a regular basis to rely on,” says Yang.

UBI isn’t exactly a new idea. From Thomas Paine to Richard Nixon, thinkers across the political spectrum have touted ideas for a guaranteed income for centuries. Similar existing programs, like the monthly share of the state’s oil revenue that Alaskans receive, also show that UBI would be unlikely to discourage people from working. In recent years, the idea of a universal basic income, or a guaranteed monthly payment from the government to everyone in the country, has gained popularity with over 50 percent support from voters under 50.

“The thing that’s changed is both an appetite for bigger bolder ideas and also the automation debate, the future of work debate,” says Hammond. “And that’s clearly how Andrew Yang uses it. I think UBI is as much a specific policy proposal as it is for him to talk about the mass automation of jobs, the struggles of the blue collar working class economy.”

There are already smaller, perhaps more implementable versions catching on in Congress. For instance, the American Family Act, which would expand the current child tax credit to more Americans and give families up to $300 a month per child, has the majority support of Democrats in the House and Senate. While 2020 candidate Sen. Kamala Harris doesn’t have a UBI plan, she did introduce legislation to provide “middle class and working families with a tax credit of up to $6,000 a year—or up to $500 a month—to address the rising cost of living.”

Sen. Cory Booker has also proposed some innovative solutions to generational poverty. His American Opportunity Accounts Act would give every child a savings account with $1,000, with the government making subsequent annual payments up to $2,000 a year depending on family income until the child is 18. At that point, the recipient could use the money for “allowable” expenses like college or buying a home. Booker has also introduced a plan to expand eligibility and refund amounts for the Earned Income Tax Credit.

Proposals like Harris’ could fix one of the biggest drawbacks with the current tax-credit system: It’s distributed just once a year in a lump sum. “A monthly payment would be responsive to that because it would provide you a base income you can rely on no matter what’s going on with your lives,” says Maag.

And unlike in 2016, when Hillary Clinton considered running on a version of UBI but considered it too much of a moonshot, economic reform seems to be a key policy point in 2020.

Yang, who wrote a book about how automation will change the job market, is fully committed to the policy. “By the time this campaign is over we will have others advocating for UBI, but most politicians are risk-averse. The majority of Democrats at the polls already support UBI,” Yang tells Mother Jones. “My job is to show everyone this is the future, it is inevitable. The sooner we get across the finish line, the sooner we can end this human suffering.”