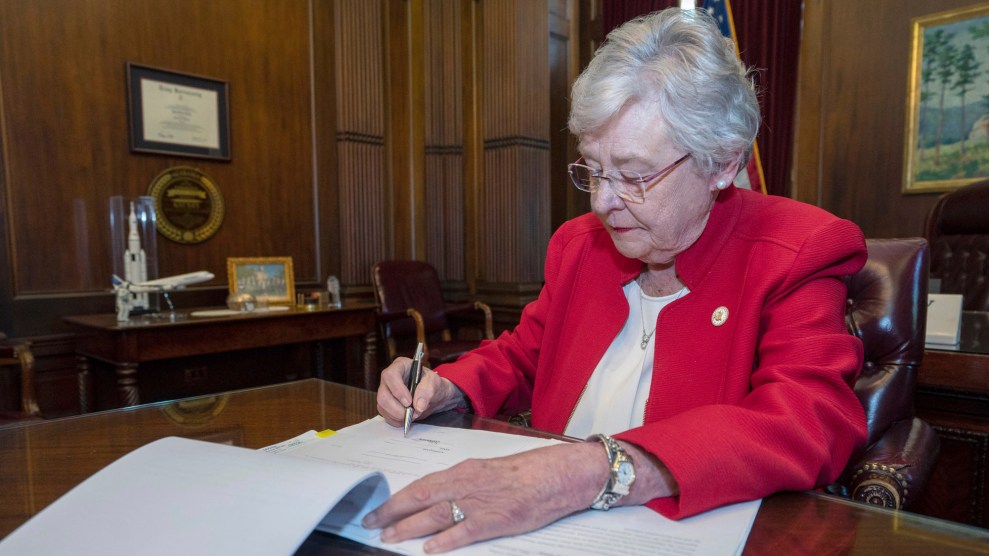 When Alabama Gov. Kay Ivey signed the most restrictive ban on abortion in the country on Wednesday, she said it was intended to help the Supreme Court to overturn the landmark 1973 Roe decision that legalized abortion nationwide. “The sponsors of this bill believe that it is time, once again, for the US Supreme Court to revisit this important matter, and they believe this act may bring about the best opportunity for this to occur,” she said.

Commentators from CNN’s Chris Cillizza to Fox News’ Judge Andrew Napolitano have predicted that the law will end up at the Supreme Court, which could use it to overturn Roe. But Ivey, as well as the legislators who passed the bill, knew that Alabama’s abortion ban would never take effect, at least until the Supreme Court really does overturn Roe. “As citizens of this great country, we must always respect the authority of the US Supreme Court even when we disagree with their decisions,” Ivey conceded in her statement at the bill’s signing, admitting that the law was unenforceable because of Roe. And the Supreme Court isn’t likely to hear a case over the Alabama bill, or similarly extreme anti-abortion measures passed recently in other states.

“It’s unlikely to be these cases that are the ones that overrule or decimate Roe v. Wade,” says Brigitte Amiri, deputy director of the ACLU’s Reproductive Freedom Project. But there are other, more subtle abortion restrictions being challenged in court that could provide a more attractive opportunity for the Supreme Court to strike down Roe.

Here’s a rundown of the Alabama law’s fate, its chances of making it to the Supreme Court, and the possibility that Roe could be reversed.

Will the Alabama law actually ban abortions in the state?

According to its text, it would. It would make all abortions illegal, including those in cases of rape or incest, unless the mother’s health is in danger. It’s the most extreme of a string of extreme anti-abortion laws passed in recent months in Georgia, Ohio, Utah, Arkansas, and Mississippi, all supposedly aimed at overturning Roe.

But like the Alabama statute, these laws are unconstitutional. The legislators know it. Federal judges know it. That’s why they’ve consistently and repeatedly struck down such bans—even conservative judges, who have conceded that as much as they hate Roe, they are still required to follow it as Supreme Court precedent. The legal record on this front is so universally settled that last November, a federal judge struck down Mississippi’s 15-week abortion ban and asked in frustration, “Why are we here?”

For more than 40 years, the Supreme Court has said, and reaffirmed, that the government does not have any compelling interest that would justify violating a woman’s due process rights by interfering in her health care decisions before a fetus can survive outside the womb, at around 23 or 24 weeks. The Alabama measure and other similar state laws that try to ban abortion at six weeks or 15 weeks or 18 weeks are unconstitutional as a result.

Judge Carlton Reeves testily explained in the Mississippi case last year that in 1992, the court reaffirmed Roe in Planned Parenthood of Southeastern Pennsylvania v. Casey, which stated explicitly, “Before viability, the State’s interests are not strong enough to support a prohibition of abortion or the imposition of a substantial obstacle to the woman’s effective right to elect the procedure.” He ticked off a list of previous attempts at pre-viability bans passed in other states, all of which had been overturned by different circuit courts, including some of the most conservative ones.

“The real reason we are here is simple,” Reeves wrote. “The State chose to pass a law it knew was unconstitutional to endorse a decades-long campaign, fueled by national interest groups, to ask the Supreme Court to overturn Roe v. Wade. This Court follows the commands of the Supreme Court and the dictates of the United States Constitution, rather than the disingenuous calculations of the Mississippi Legislature.”

Reeves, the second African American judge ever to serve on a Mississippi federal district court, was appointed by President Barack Obama, but he’s not a liberal outlier. Last year, a three-judge panel on the 11th Circuit Court of Appeals ruled in favor of abortion providers in Alabama who sued to block a law that would have banned a common second-trimester abortion procedure. The judge who wrote that opinion was appointed by President George H.W. Bush and called Roe an “aberration” of constitutional law. Another judge on the panel quoted Supreme Court Justice Clarence Thomas in writing that the Supreme Court’s abortion jurisprudence “has no basis in the Constitution,” but conceded, “The problem I have…is that I am not on the Supreme Court, and as a federal appellate judge, I am bound by my oath to follow all of the Supreme Court’s precedents, whether I agree with them or not.” (Alabama has appealed that case to the Supreme Court, which has not yet decided whether to take it.)

The new Alabama abortion ban isn’t scheduled to take effect for another six months, but it mostly likely never will. The ACLU and Planned Parenthood have already announced plans to sue the state in federal district court, where they are likely to win an injunction preventing the law from being enforced until the case is fully litigated. And the district court will eventually strike down the law entirely because it’s clearly a violation of Roe. Even if a district court judge tries to go rogue and uphold the law, that decision isn’t likely to survive an appeal to the 11th Circuit, which will grudgingly apply the Supreme Court precedent, as it did before and is required to do.

But will the Supreme Court rule on it?

If history is any guide, no. The court will likely take a pass on hearing any challenge to the Alabama law because there’s simply no legal reason for it to take the case. More than 40 years of precedent has already established that these sorts of laws are unconstitutional.

A host of other states have taken a similar run at the Supreme Court, trying to pass draconian abortion laws they think will lead the court to overturn Roe. The outcome is always the same: The Supreme Court won’t touch these cases. In 2015, for instance, the 8th Circuit struck down a six-week abortion ban in North Dakota—a case the Supreme Court also declined to hear. These cases are blunt instruments for a court that may ultimately want to restrict abortion but also wants to project a veneer of impartiality and respect for precedent. That’s why, despite what Alabama legislators think, the uniformity in the lower-court abortion decisions almost guarantees that the Supreme Court will not get involved in any of the recent “heartbeat” bills or other extreme abortion bans that target pregnancy before the fetus is viable.

The high court takes only a handful of cases a year, and one of its criteria for deciding to take a case is whether there’s a disagreement among the circuits on how to interpret the law. There’s no circuit split on pre-viability abortion bans for the high court to settle, regardless of whether Brett Kavanaugh is now seated there. As Reeves wrote in his Mississippi opinion: “With the recent changes in the membership of the Supreme Court, it may be that the State believes divine providence covered the Capitol when it passed this legislation. Time will tell. If overturning Roe is the State’s desired result, the State will have to seek that relief from a higher court. For now, the United States Supreme Court has spoken.”

But now that the court has a solid conservative majority, are there other ways for it to dismantle Roe?

“Any Supreme Court case that deals with abortion could be used to dismantle Roe v. Wade,” says the ACLU’s Amiri. Several cases are already in the pipeline that offer far better and more immediate opportunities for the court to chip away at Roe, or even overturn it, before the end of 2020. Among those is one from Indiana, which in 2016 passed a law banning abortion on the basis of gender, race, or disability, such as Down syndrome. It also mandated that fetal remains be treated like other human remains and buried or cremated.

This case is already sitting at the Supreme Court. Planned Parenthood, which sued to block the law, prevailed in the 7th Circuit, and the state appealed to the Supreme Court. The Indiana case raises somewhat more novel issues than the Alabama law or heartbeat bills, but it still takes aim at pre-viability abortions—the reason the 7th Circuit found it unconstitutional. There’s no circuit split on the issue for the court to resolve. Nonetheless, the court has relisted it for consideration at its weekly conference meeting 14 times since January, and it was slated to be considered again on Thursday—a sign that the court is deeply divided over it and seriously considering taking it up. While the high court might not use it to overturn Roe, it could use the case to impose new restrictions that would make abortions so difficult to get that they might as well be illegal. The court needs to make a decision on whether to take the case before the end of June. If it decides to do so, it could rule on it within the next year.

There are a handful of similar cases currently pending before the court or arriving soon. All of them could provide an opportunity for the high court to dismantle abortion protections or overturn Roe long before Alabama’s law gets there—if it ever gets there.

So where do things stand in the meantime?

Despite all the hype over Alabama’s draconian new law, they stand basically where they did at the beginning of the week. As the ACLU’s Amiri reminds us: “Abortion is still legal in all 50 states.”