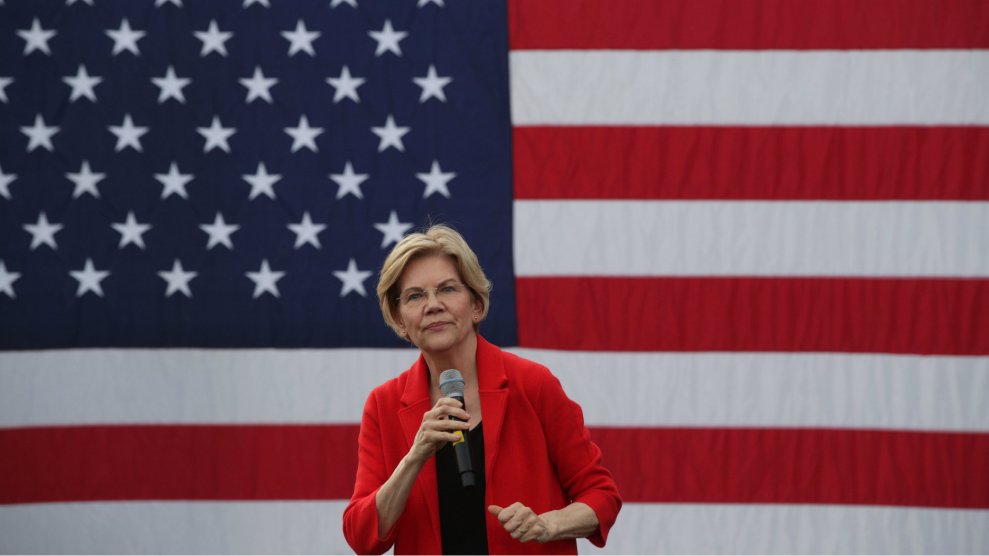 One month after Sen. Elizabeth Warren formally launched her campaign for president, she leaned forward during a Senate hearing with senior Pentagon officials and said something you probably won’t be seeing on a bumper sticker: “Let’s dig in a little bit then on OCO.”

Warren, the Massachusetts Democrat, was asking about “overseas contingency funding,” another name for the Pentagon’s war-fighting expenses, which are not restricted by congressionally mandated budget caps. To keep increasing its budget, defense officials under Barack Obama and now Donald Trump have repeatedly added on new OCO expenditures, effectively turning a safety valve designed for use in overseas conflicts into what one former budget official called “a piggy bank for the Defense Department.” That’s rankled lawmakers like Warren, who used her time that day to blast the White House’s recent attempt to increase OCO allocations by $95 billion. “I think it’s time to stop this business of more, more, more for the military,” she said.

“I think it’s time to stop this business of more, more, more for the military.”

Since Warren joined the Senate Armed Services panel more than two years ago, she has carved out space for narrowly tailored, wonky reforms that might inspire passionate think-tank panels, but couldn’t be further from the kitchen-table issues on which she has staked her political ascent and her White House bid—issues such as student debt, affordable housing, and the opioid crisis. Many of her primary opponents have largely avoided discussing foreign policy and the military. And when the issue does come up, it’s often in the context of America’s unending wars or as part of a debate over rising levels of defense spending.

Warren shares those concerns, but she’s also been willing to get far more specific. Last week, she introduced proposals to tackle the Pentagon’s carbon footprint and the revolving door between the defense industry and government. Weeks earlier, she released a plan to reform military housing. Those initiatives, outlined in a series of Medium posts, contain some novel ideas, such as imposing a fee on contractors that have not reached net-zero carbon emissions and blocking former national security officials from lobbying for foreign governments—something that Michael Flynn, Trump’s disgraced former national security adviser, infamously did.

Unlike some of her usual allies on the political left, Warren isn’t talking about fundamentally changing the military’s focus or reducing its lethality. Instead, cleaning up the Pentagon—literally and otherwise—is Warren’s stated goal. “We don’t have to choose between a green military and an effective one,” she wrote in a blog post introducing her climate plan, which includes a net-zero carbon emissions goal for all “non-combat bases and infrastructure by 2030” and billions of dollars in research “on microgrids and advanced energy storage.” Climate change has posed a persistent challenge for the Pentagon’s assets, but the sprawling department has been slow to prioritize it as a threat. In April, Warren urged military leaders to act “act vigorously and expeditiously to mitigate” the problem.

In November, Warren sharply criticized the Pentagon in a major speech at American University, declaring that the department had been captured by defense contractors. During congressional hearings, she’s ripped into military waste, with much of her attention lately focused on Patrick Shanahan, the acting Pentagon chief who Trump nominated earlier this month to lead the department permanently. Warren has criticized his ties to defense giant Boeing, where Shanahan spent three decades before entering government.

At Warren’s request, the DOD’s inspector general opened an investigation into whether Shanahan improperly favored Boeing at the expense of other contractors while serving as deputy secretary of defense. He was cleared of any wrongdoing, but Warren turned up the heat nonetheless. “Shanahan’s obvious potential conflicts of interest remain,” she said. “The truth is that our existing laws are far too weak to effectively limit the undue influence of giant military contractors at the Department of Defense.” That would change under her ethics package, which governmental ethics expert Craig Holman tells Mother Jones would be “much broader than the current law.”

Warren’s focus on the Pentagon’s ties to the defense industry aligns nicely with the anti-corruption agenda she has promoted as a senator, but it has raised questions about how consistently she has applied progressive principles in her work in Congress. “Warren has fought to stop the Army from shifting funds away from a Massachusetts-built communications network to pay for unanticipated costs associated with the war in Afghanistan,” noted a Politico story from 2015. “She’s lobbied for problem-plagued General Dynamics-made tactical radios. And she’s pledged to protect Westover Air Reserve Base from the budget ax—all while saying she supports ‘targeted’ cuts elsewhere.”

When it comes to foreign intervention, Warren has been a reliable opponent of the US-backed Saudi Arabian war in Yemen and a critic of the Trump administration’s bellicose stance toward Iran. But her views have not always aligned with those of other progressive lawmakers and activists. She declined to support a Senate resolution that would have blocked Trump from intervening in Venezuela without congressional authorization. After initially saying in January that she opposed sanctions against embattled Venezuelan President Nicolas Maduro’s regime, she reversed course a month later. “When It Comes to US Militarism, Elizabeth Warren Is No Progressive,” read the headline of a recent article from the left-wing outlet In These Times.

Warren’s climate change proposal has received similar scrutiny. The socialist magazine Jacobin blasted her legislation for allowing waivers in the event of a war or if market conditions demand that the Pentagon prefer one contractor. New York magazine reduced her proposal to a call to make a “cleaner, greener war machine,” but noted, “if we want to get 60 Senate votes on a massive investment in green technology within the next couple of years, Warren’s ‘let’s buy ourselves a cleaner, greener war machine’ may be the best shot we’ve got.” Progressive writer Naomi Klein took aim at the plan, arguing that the defense budget should instead be “slashed to help pay for a Global Green New Deal.”

.@ewarren is running a great campaign but when it comes to climate breakdown, this is *not* a plan for that. The most powerful war machine on the planet is never going to be "green." The outrageous military budget needs to be slashed to help pay for a Global Green New Deal. https://t.co/LWQO74g2pP

As for Warren’s advisers, she’s drawn input from Sasha Baker, a former deputy chief of staff to Obama-era Defense Secretary Ash Carter, and Ganesh Sitaraman, a law professor at Vanderbilt University who has sketched a progressive foreign policy vision that is skeptical of international intervention and bullish on redirecting current Pentagon spending to cyber defense and other new technologies that will play major roles in future conflicts.

For now, primary voters have not prioritized foreign policy, despite the fact that the president’s authority in international affairs can be far more significant—and subject to far fewer constraints—than his or her domestic powers. But with Shanahan’s confirmation hearing set for next month, Warren will have ample opportunity to put a spotlight on climate, Defense Department ethics, or even OCO funding.