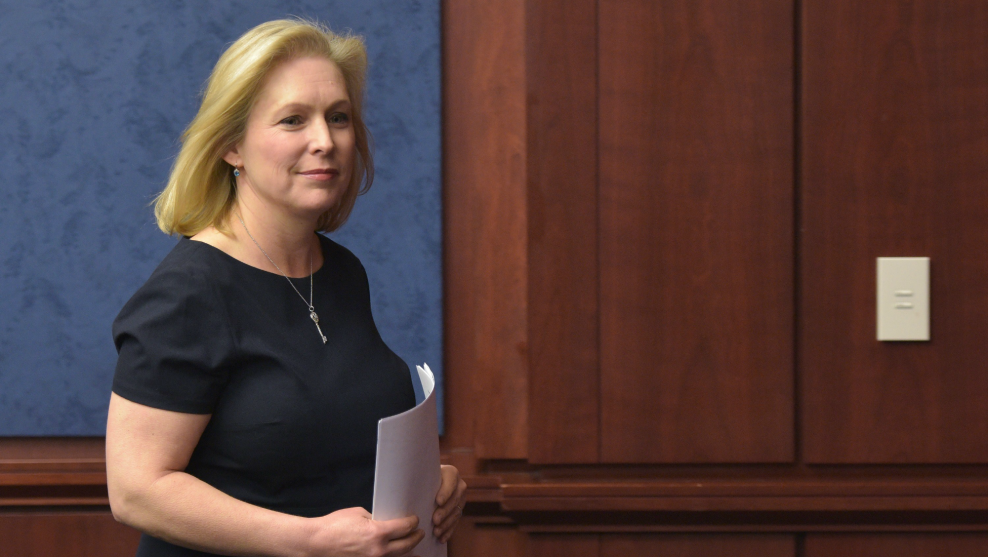 Sen. Kirsten Gillibrand (D-N.Y.) is the first 2020 candidate to unveil a campaign finance policy, introducing a proposal last week that she’s dubbed her Clean Elections plan, which would create a new voucher system to pay for federal elections. Gillibrand’s campaign says she’s pushing this because she wants to bring more women, underprivileged communities, and people of color into the democratic process.

“My Clean Elections plan is a critical structural change that gets big money and special interests out of politics,” Gillibrand said in a statement on her website, “and ensures that elected officials in Washington are beholden only to the people who sent them there.”

Gillibrand’s proposal, which is modeled on a similar democracy voucher program in Seattle, would give every voter $600 in what she calls “democracy dollars” to donate to federal candidates for office. Each election cycle, every eligible voter would receive $200 for each House, Senate, and presidential elections with a maximum donation of $600 for federal offices, which can be used for one or more candidate.

Candidates can opt in to the program if they meet the qualifying threshold and agree to cap all individual cash donations to $200. The proposal would be financed by eliminating a corporate tax deduction for CEOs and diverting the surplus dollars into the voucher program.

“It’s a pretty bold proposal from a fairly moderate, mainstream Democrat,” says Daniel Weiner, senior counsel at the Brennan Center for Justice at New York University. “I think people are just fed up with the campaign finance system, and to see someone like Gillibrand—and not Warren or Sanders—be the first to put forth a plan like this is telling of where we are politically.” He says one of the strongest appeals of the effort to persuade moderates—for whom campaign finance issues have not always been essential—involves Gillibrand’s plan “being paid for with a surcharge to corporate America, and so nothing is being added to the budget deficit.”

Gillibrand’s idea is based on a Seattle voucher program that came from a grassroots effort in the city to get more public funding into elections. The goal was to have a more diverse pool of people participate in elections that had previously been financed primarily by wealthy white people.

The program in Seattle is largely considered a success, with three times more individual donors after it began—and many of them were people of color, women, young people, and less affluent citizens. The Seattle Times noted, “The voucher program had doubled the percentage of giving coming from people under 25, when compared with the mayor’s race,” which did not accept vouchers. Participation by those with incomes below $50,000 was 5 percent higher in races where democracy vouchers were used compared to races where they weren’t. And among women, donor participation was approximately 10 percent higher with the voucher program.

Through the efforts of a grassroots initiative by Alan Durning, a Seattle activist, and his progressive think tank the Sightline Institute, a ballot initiative for the program passed overwhelmingly in 2015. “Based on what we’ve seen, the program in Seattle has shown tremendous results, and the goals we set for ourselves have been far exceeded and much more quickly than we anticipated,” says Margaret Morales, a researcher at the Sightline Institute. “So the same sort of program on national level is very exciting to see.”

It’s too early to tell if the program had tangibly affected specific policies, Morales says, but over the last two years a more diverse group of candidates entered races because of the voucher program, and she anticipates that trend will continue. The percentage of small donations under $250 in Seattle city elections jumped from approximately 48 percent to 87 percent due to the program.

Unlike Gillibrand’s national program, which would be funded by CEOs’ bonus paychecks, the Seattle program has been paid for by marginally higher property taxes, costing the average Seattle homeowner about $11.50 per year, with the amount based on the value of the property.

There has been some pushback from two Seattle property owners. Their legal representatives say the program is “grossly inefficient” and “wastes taxpayer money.” The two Seattle residents are currently challenging the voucher program in court and are represented by the Pacific Legal Foundation, a conservative, libertarian-leaning law firm that claimed the program violated the First Amendment because taxes were going to fund candidates these taxpayers didn’t necessarily support.

Luke Wachob, communications director at the Institute for Free Speech in Virginia, a nonprofit that defends First Amendment rights and political speech, says Gillibrand’s program “would not cleanse our political system of corruption or inequality.” He argues it would be prohibitively expensive and “would amplify the voices of people who are already highly engaged in politics and have the awareness, resources, time, and interest to request and use the vouchers.”

Wayne Barnett, executive director of the Seattle Ethics and Elections Commission, which runs the voucher program, says the argument that using tax dollars to fund a voucher program violates free speech has never been successful in court, and that the program has been very effective at reaching its goals of broadening the base of candidates and campaign donors in Seattle.

Campaign finance reform advocates see the timing of Gillibrand’s proposal as cause for some optimism. Lisa Gilbert, vice president of legislative affairs at Public Citizen, a government watchdog, says, “This plan could be game-changing and shows how all the candidates are in an arms race to come out with solutions to campaign finance and democracy reforms.”

Gillibrand’s communications director, Meredith Kelly, says the plan “is not meant to please Republicans or CEOs. It’s meant for most Americans who want to reduce the voice of big money and corporate influence in Washington.”