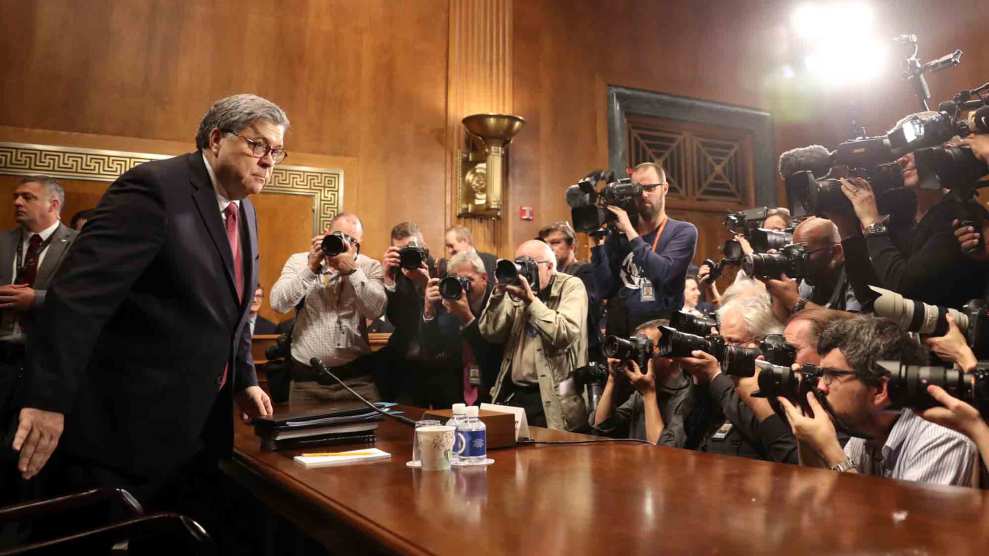 On Wednesday, the Democratic-controlled House Judiciary Committee voted to proceed with a contempt resolution against Attorney General Bill Barr. The man installed as the nation’s chief law enforcement officer by President Donald Trump—who had been looking for his own Roy Cohn—had refused to hand over an unredacted version of special counsel Robert Mueller’s final report and had ducked a committee hearing the previous week because Democrats had insisted on allowing the committee’s counsel to question Barr. The contempt vote, committee Democrats say, was a demonstration of Democratic unity (among a caucus divided on the question of impeaching Trump) and a signal to the party’s base and others that the Dems, as they face an obdurate Trump administration bent on stymying congressional investigations, are willing to punch back. But they may be punching in the wrong direction and, consequently, helping Trump escape the Russia scandal.

Barr is a convenient target for the Democrats. He misled the public about Mueller’s report—twice: with the four-page letter he wrote purportedly summarizing the report’s conclusions, and the press conference he held before the report was released. Barr downplayed the evidence related to the question of whether Trump had committed obstruction of justice and said Mueller had handed him the decision on whether Trump had committed this crime. (Mueller’s report said that was a matter for Congress to handle.) Barr said Trump had cooperated fully. (Trump had refused to be interviewed.) He echoed Trump’s mantra of “no collusion.” (Mueller had investigated whether there had been any criminal conspiracy related to the Russian attack on the 2016 election and found nothing to prosecute—and rendered no judgment on “collusion.”) And Barr, unsurprisingly, had not mentioned that Mueller’s report cited numerous lies from Trump and his crew about their interactions with Russia and Moscow’s assault on the United States.

An attorney general spinning for a president who might have criminally obstructed justice is important. But, arguably, it is not as important as what has prompted all this hubbub: the Trump-Russia scandal itself.

The Mueller report reaffirms the core elements of what is probably the most consequential political scandal in American history. Russia, it notes, waged a “sweeping and systematic” attack on a US presidential election. And, Mueller notes, Trump and his campaign, while publicly denying this attack was underway, sought to benefit from it. As the report states, during the campaign, Trump called “this whole thing with Russia” a “total deflection” and said that the notion Moscow was intervening in the election was “farfetched” and “ridiculous”—which is precisely what Russia was claiming at the time. Trump’s embrace and promotion of Moscow disinformation was not a crime—but Mueller included it in his narrative.

Mueller’s report lays out the curious series of interactions between Trump associates and Russia throughout the 2016 contest—showing that the campaign even attempted to establish a back-channel connection to Putin’s office after public reports that Moscow was behind the hack-and-dump attacks mounted against Democrats and the Hillary Clinton campaign. Additionally, the report details how Trump lied to the public about his secret efforts during the campaign to develop a Trump tower project in Moscow. (After 10 months of negotiations, the project fizzled out once Trump essentially secured the Republican presidential nomination in June 2016.) The report points out that Trump continued to lie about this deal after he won the election. It cites a remark he made at a press conference days before moving into the White House: “I have no deals that could happen in Russia, because we’ve stayed away…We could make deals in Russia very easily if we wanted to, I just don’t want to because I think that would be a conflict.”

It was a conflict—perhaps the most significant conflict of interests ever for a major presidential candidate. While campaigning for the highest office in the land, Trump was expressing his (Moscow-friendly) views and positions on Putin and US-Russia relations. Yet at the same time, Trump needed Russian government permission (directly or indirectly) for a project that could, according to Mueller, net him hundreds of millions of dollars. And, as Mueller reports, Michael Cohen, Trump’s onetime fixer, even had a phone conversation with the personal assistant of Dmitry Peskov, Putin’s press secretary and deputy chief of staff, and requested help securing land and financing for the deal. Trump’s man asking Putin’s man for assistance, as Trump campaigns for president? This one component of the Trump-Russia affair—even if not a crime—ought to be a huge scandal of it own.

So the Mueller report is a reminder of what happened in 2016: Russia attacked an American election, and the Trump clan sought to take advantage of this and aided and abetted Putin by amplifying Moscow’s disinformation. Yet this treacherous behavior is not at the center of the post-Mueller debate. In fact, these basics of the Trump scandal have never been fully confronted by the political media world. The focus has too often been on the issue of collusion—mostly because Trump has successfully framed collusion-or-not as the only standard of wrongdoing in this skullduggerish episode. And for the past two years, his cultlike Republican handmaids on Capitol Hill and his conservative propagandists in the media have hyped up various deep state conspiracy theories and concocted assorted diversions—purported wiretapping abuses, alleged spying on the Trump campaign, and a supposed FBI vendetta against Trump—to distract from the central narrative of Trump’s deceitful conduct of the 2016 campaign. There have been no congressional hearings that zeroed in on this.

With the release of the Mueller report, the fundamental political dynamic has not shifted. The political discourse has not fixated on the original sin of Trump’s presidency—his own act of betrayal. Instead, the outrage has focused on Barr and his efforts to protect Trump from the taint of obstruction. This is hardly insignificant. But a brawl over Barr is more likely to come across to the public as yet another Washington mud-wrestling match—a process matter and turf battle that engages fierce partisans without resonating with those who don’t watch cable news shows. It kicks up a lot of dust. And that dust presents a clear view of what’s at the center of all this.

It’s often said that when it comes to scandals in Washington and elsewhere, the cover-up is worse than the crime. But that’s not always true. While it appears possible that Trump committed a crime (obstruction) to impede an investigation that found no criminal conspiracy between him and Russia, his actions in 2016 remain immensely scurrilous. And this is not just history. Because Trump still cannot acknowledge the Russian attack (and his helpmate role)—after entering the White House he continued to deny Putin intervened and signaled to Russia he didn’t mind its interference—Trump has neglected his most sacred duty as president: to protect the United States. In a recent 90-minute phone call with Putin, he declined to warn the Russian leader about future attacks on the 2020 election. (The FBI says it expects such assaults from Moscow.) And a recent media report noted that Trump’s ousted secretary of homeland security, Kirstjen Nielsen, had been told not to discuss with Trump efforts to protect US elections from Russian intervention because such talk angers Trump, who believes it undermines the legitimacy of his electoral victory.

Trump is right. The 2016 election was tainted—in part because he helped an adversary influence the election by providing cover for its covert attack. So far, Trump has not had to face any consequences for this misconduct. The release of the Mueller report did provide an opportunity for renewed public consideration of Trump’s mendacious wrongdoing. But Barr has become the bull’s-eye. He is taking arrows for the boss. And so far, it’s working. Trump has eluded perhaps the most damning implication of Mueller’s report: Trump sided with—and assisted—a foreign foe that ambushed American democracy.