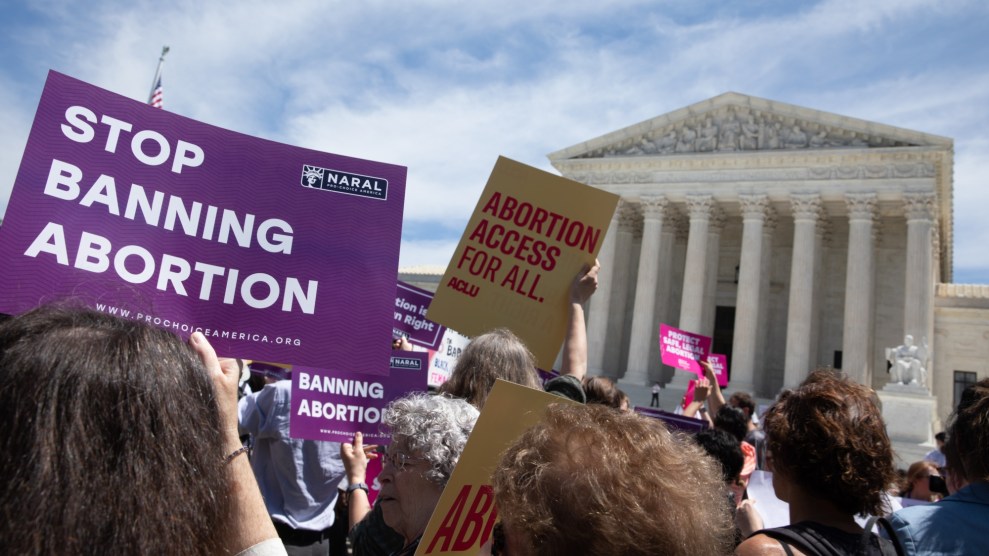 When Alabama passed a near-total abortion ban two weeks ago, it received some unlikely criticism from conservatives who worry that the law is too radical to end abortion nationwide once and for all. “In my whole political career, I have believed in rape, incest, and life-of-the-mother [exceptions],” said House Minority Leader Kevin McCarthy. “That’s where our platform stands.” As a writer for the Federalist put it, “In the worst-case scenario for pro-lifers, the law might even wind up strengthening Roe v. Wade…[T]his seems counterproductive.”

Perhaps the standout articulation of this strategy came from Pat Robertson, the staunchly anti-abortion televangelist. “I think Alabama has gone too far,” said the 89-year-old media mogul during a TV interview. “It’s an extreme law. They want to challenge Roe v. Wade, but my humble view is that this isn’t the case we want to bring to the Supreme Court, because I think this one will lose.”

Abortion opponents have long sought a case that they could pursue up to the Supreme Court and eventually use to overturn Roe v. Wade, the seminal 1973 ruling that legalized abortion nationwide. Mother Jones spoke with Mary Ziegler, a law professor and the author of last year’s Beyond Abortion: Roe v. Wade and the Battle for Privacy, about why this current effort is likely to fail.

Mother Jones: Pat Robertson said the Alabama bill was too extreme to successfully overturn Roe. Can you explain this line of thinking a bit more?

MJ: What made the Alabama law successful now?

MZ: So the last time Roe was potentially in jeopardy, the model for the anti-abortion movement for banned abortions included exceptions for rape and incest and things like a threat to the woman’s life. And that was because the more sophisticated, establishment anti-abortion groups had lots of cold data and focus-group research showing that people didn’t want to ban abortion under those circumstances, even if they were willing to at other points in pregnancy. So they didn’t touch it. There’s been a strategic divide in the pro-life movement for some time, and some of the more absolutist folks now have more of an audience in the GOP and are having more success in presenting legislation than they have in the past.

There was a guy named Dan Becker [formerly of Georgia Right to Life], and he argued basically that you could get politicians to take really strong personhood stands if you played your cards right. His whole thing was that if you make clear that you won’t support a politician who supports exceptions, they’ll back off—basically, the GOP needs us as much as we need the GOP, so we don’t need to make all these compromises.

And he, of course, was from Georgia. So it’s not a coincidence. I mean, Janet Porter [of the National Life League] has done a lot of work in Alabama, Dan Becker’s work in Georgia, so the fact that these bills are coming out of those places is also no accident, because those groups were trying to kind of marry political influence and absolutist principles.

MJ: Are there other instances where the more absolutist side of the anti-abortion movement clashes with the more moderate faction?

That began to be the absolutist argument—that sometimes, some is the equivalent of none, because you’re never actually moving on to more. If the public is only willing to support so many restrictions, that’s kind of where you’re stuck.

There was another instance in the early ’80s. Everyone expected Congress to be able to pass a constitutional amendment [on abortion]. The pragmatists in the movement thought the best they could do was a proposal by [former Utah Sen.] Orrin Hatch that would state there was no constitutional right to abortion. It wouldn’t actually ban any abortions; it would just let the states do that. A lot of the absolutists were really angry about this, and so they basically deep-sixed it.

The pragmatists say this isn’t just about the GOP—this is about shaping public opinion, and to some degree, abortion politics has to follow popular opinion. Absolutists believe that unless you stick to your principles, you’ll never change public opinion. That’s the crux of the disagreement. What’s different now is that the absolutist groups are in some ways copying the pragmatist playbook in the sense that they’re mostly operating in legislatures and courts and not focusing as exclusively on things like protests outside clinics and other nonlegal or lobbying tactics.

MJ: The Alabama law has gotten a lot of attention for not having exceptions in cases of rape or incest. Why did anti-abortion activists accept those concessions before, if they were opposed to abortion in all instances?

MZ: After Planned Parenthood v. Casey (the 1992 Supreme Court case that allowed the state to regulate abortions in the first trimester), a lot of pro-lifers basically concluded that the court would never overrule Roe if they thought that Americans didn’t want them to overrule Roe. The idea was that you only pushed as far as you could go—keeping in mind that you had to be realistic about the court, but also keeping in mind that you wanted to have popular opinion on your side. At that time, people weren’t okay with banning abortion in cases of rape or incest. So they didn’t propose that; they were very practical. And I think there’s a lot of idealism in the folks who proposed the Alabama law, and not necessarily a lot of strategic savvy.

MJ: Do you think the Alabama law could be the one to unravel Roe? And if not, what do you think would work?

MZ: I don’t think it has a good chance. This would be a pretty long shot compared to other things.

One of the interesting bills that the court could think about taking, ironically, is from Alabama. But it’s a very different law. It’s banning so-called dismemberment abortions or dilation and evacuation, which is the most common second-trimester procedure. The court hasn’t had the opportunity to conference that case yet. That’s the kind of thing I would expect to be the start down the road, because you could uphold that law by extending Gonzales v. Carhart, the court’s last decision upholding an abortion restriction, without looking like you were indifferent to precedent. Gonzales banned partial-birth abortion and this would ban dilation and evacuation, neither of which are first-trimester procedures. So there’s a playbook based on Supreme Court precedent that you can use. And then if you upheld that law, you could start dropping hints that you might not like Roe, doing that gradually over the years, and eventually overturn Roe.

The organized pro-life movement has been trying for years to make the case that undoing Roe is the right thing—not because anti-abortion opponents want it, but because it’s the right thing on principle. Alabama is sort of the opposite. Legislators are saying, “We’re not really interested in enforcing this law. We’re just interested in getting rid of Roe v. Wade.” I don’t think that’s how you do it. You try to actually convince the courts that’s the right path to take, not simply ask to get your way.

MJ: There’s been a massive amount of attention on the Alabama law, both on the anti-abortion side and the pro-choice side. Do you think it’s warranted?

The extreme optimism can be damaging to the pro-life movement, because it marginalizes more effective strategies and foregrounds the work of people who are alienating a lot of voters in the middle. And it does a disservice to the pro-choice movement, because it takes the spotlight off the strategies that are more likely to be successful. While everybody’s freaking out about the Alabama bill, there are lots of other strategies that are actually likely to work that no one’s paying any attention to that are working their way through legislatures and courts. It’s not just going to be one decision saying Roe is gone, which is easy to understand—it’s something that’s going to be a death of 1,000 cuts, slow and complicated, and requires an extended period of paying attention.