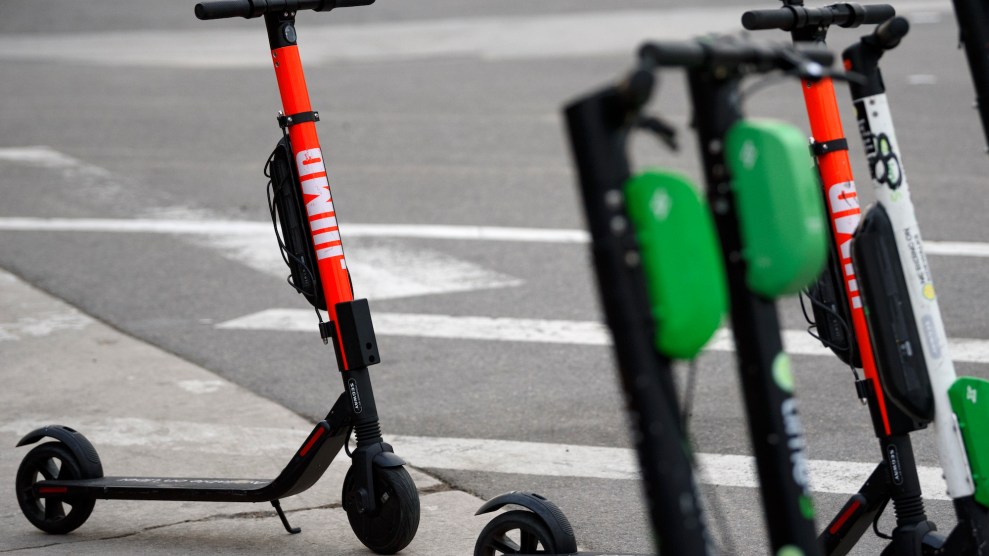 Dockless electric scooters have become a controversial new transit option in cities across the country. A new study suggests another reason pedestrians perceive them as such a menace: Nearly 30 percent of the people injured riding electric scooters had been drinking alcohol, according to the Centers for Disease Control’s first-ever study of scooter-related injuries.

The study covered 87 days last fall in Austin, where the number of scooters in the city went from zero to 15,000 last year. The CDC study reported that just in that short time frame, nearly 200 people were injured in scooter crashes, and many of the injuries were severe—in large part because virtually no one wears helmets while riding the things. Only a tiny percentage of the injuries stemmed from collisions with cars—10 percent—even though the majority were sustained by people riding in the street. The biggest contributor, along with alcohol, was simply speed.

“There may be the perception that a lot of the scooter riders were involved with collisions with motor vehicles. We didn’t find that,” Jeff Taylor, an epidemiologist who worked on the study, told Smart Cities Dive. Most of the injuries came from falls. Riders, Taylor said, “were losing their balance or hitting a curb or hitting a structure like a light pole.”

The CDC found that more than a third of the injuries happened to people on their very first ride, and it also confirmed the impression that scooters are a bro thing: Most of the injured riders were dudes. More than a third of the injured riders broke a bone, and 15 percent of them incurred a traumatic brain injury—a potentially huge hidden cost of e-scooters that’s likely to be borne by the taxpayers, not Bird and Lime, the biggest scooter companies.

Traumatic brain injuries are catastrophic and expensive. They can lead to permanent disability in the survivors. The CDC study didn’t address the health care costs, or who paid for them, in the injured scooter riders. But the experience of motorcycle riders gives some indication of the effects of public policies that result in increased head injuries. In Florida, for instance, in the three years after the state repealed its mandatory motorcycle helmet law in 2000, the health care costs of treating brain injuries more than doubled, jumping from $21 million to $50 million, a good chunk of which was assumed by the state Medicaid program.

In an interview about the study with Kaiser Health News, Paul Saffo, a tech forecaster who teaches in the Stanford University engineering school, raised a similar issue when he noted that cities haven’t fully considered some fundamental questions about the way scooter companies use public property for private gain. “Scooters are lying around on sidewalks and being used by a private company making profit off use of the public infrastructure,” he said. “The question is: Is the public being fairly compensated for the private use by a for-profit of a public infrastructure?”