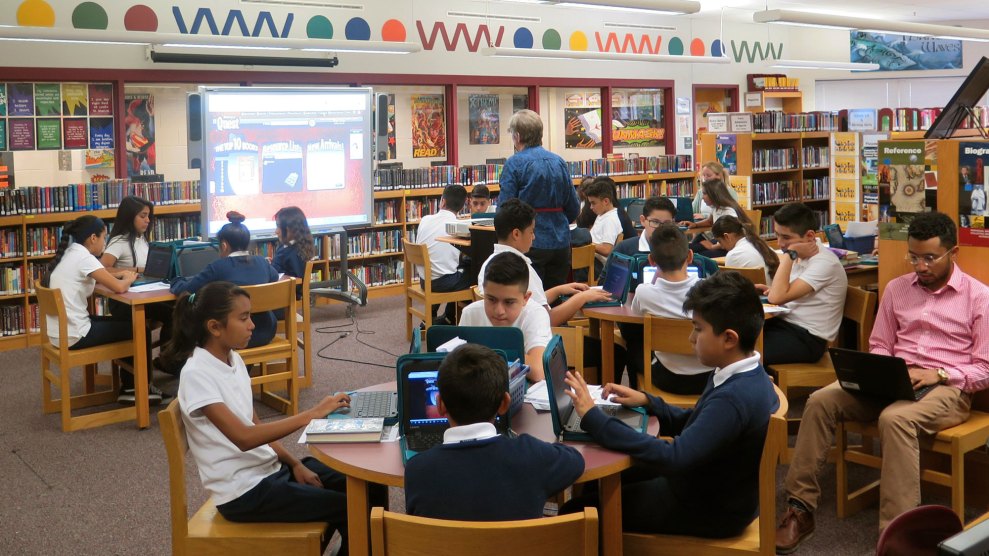 In this Sept. 27, 2017 photo students learn about searching for books and keeping track of what they've read in the library at Bruce-Guadalupe Community School, a charter school in Milwaukee where 97 percent of students are Latino. Ivan Moreno/AP

In 1947, seven years before Brown v. Board of Education, a federal appeals court in California struck down segregated “Mexican schools” in Orange County. Mendez v. Westminster prefigured Brown; it was the first case to hold that segregation in schools was inherently unconstitutional. Not long after, then-Gov. Earl Warren signed a bill ending segregation in public schools across California, making it the first state to do so in the country. Warren would go on to become the chief justice of the U.S. Supreme Court, and his decision in Brown 65 years ago today followed the contours of the ruling in Mendez.

“Brown, in the immediate aftermath, was focused on how do you integrate African-American children into a majority-white school. It didn’t have to be that way,” says Erica Frankenberg, an education professor at Penn State University. “But that’s how it was implemented.

“So much of our model of desegregation was in this biracial, black-white notion, it’s hard for us to actually think about what should it look like, if there’s no white majority? Or if there are three groups?”

Frankenberg is one of the authors of a recent report from UCLA’s Civil Rights Project and Penn State University that found that school segregation is worsening, particularly in the suburbs and in reaches far beyond the South, in states like California, Maryland, Illinois, and New York. At the time of the Brown decision, 80 percent of public school students were white; 15 percent were black. Since then, a radical shift has happened: White students no longer hold the vast majority of seats in classrooms, and more than one in four students in schools are Latino.

Decades after the Brown decision dismantled a dual system of schooling for white and black students, the surges in Latino and Asian student population, and the relative decline in white students in America’s schools, have complicated the conventional thinking on school segregation. Along with white students, Latino students have emerged as one of the most isolated groups of students, with little comprehensive effort aimed at addressing their division from their peers.

Meanwhile, in California, New York, and Texas, more than half of Latino students were attending intensely segregated schools in 2016.

The segregation of Latino students seemed to happen behind much of the country’s back. In the aftermath of Brown, Frankenberg says, Latinos were practically “invisible,” both as a share of the population and as a matter of public education policy. It wasn’t until 1973, nearly two decades after Brown, that the Supreme Court concluded that Latino students have the right to go to desegregated schools. Keyes v. School District No. 1 was a landmark case against Denver public schools, the first to tackle segregation in a non-Southern city. With its decision, the Supreme Court opened up challenges to segregation not codified in the law and determined that the Latino and black students “suffer the same educational inequities when compared with the treatment afforded” to white students. Keyes was immediately undermined. Under President Richard Nixon, the Justice Department diverted enforcement of court-ordered desegregation plans, and over time, court-ordered desegregation plans covering Latino students diminished.

Even if there’s growing diversity overall, Frankenberg notes, that doesn’t mean that there’s growing exposure to that diversity across all groups. Since 1988, the share of white students attending almost entirely white schools dropped from nearly 39 percent to 16 percent in 2016. At the same time, the share of nonwhite kids attending intensely segregated schools with kids of color tripled to 18 percent.

“There’s a tension that we have to be sure that we’re wrestling with,” Frankenberg says. “We’re seeing a decline of these heavily white schools. So the inclination can be for white people to think, ‘So, segregation is getting better because I’m seeing more people of color.’ In fact, that is not the case. Yes, there is a decline in the number of white, isolated, segregated schools. But that doesn’t mean that integration is getting better for all groups.”