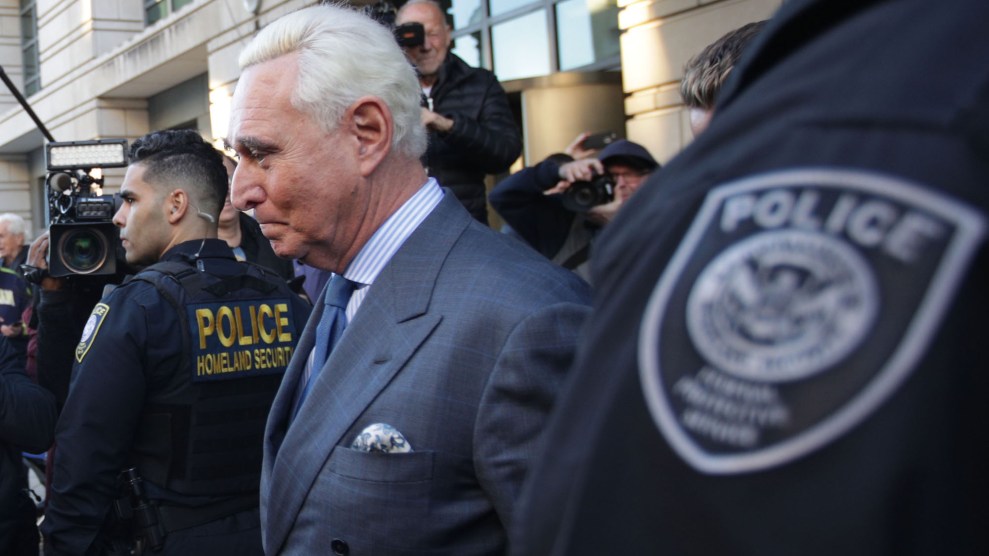 As he battles perjury and obstruction charges, longtime Trump adviser Roger Stone and his legal team are doubling down on the debunked claim that the 2016 hack of the Democratic National Committee was carried out by a Democratic insider, not Russian intelligence.

In a motion filed on Friday, Stone’s lawyers argued that evidence in his case should be thrown out because the government gathered it using search warrants that stated the FBI was investigating Stone for crimes, including conspiracy and wire fraud, that were based on “the assumption that the Russian state is responsible for hacking” the DNC and Hillary Clinton’s campaign manager, John Podesta. That is, Stone is suggesting Moscow was not behind the hack-and-dump operation against Democrats in 2016. And, in doing so, he is continuing to fuel a discredited conspiracy theory that exploited the tragic murder of 27-year old Democratic National Committee staffer Seth Rich to boost his legal case.

Stone’s motion, which has long odds of succeeding, highlights the public relations problem that his upcoming trial poses for President Donald Trump. Trump and his champions are calling for the country to move past investigations related to the Trump campaign’s effort to benefit from Russia’s attack on the 2016 election—and Trump’s false denials that Putin’s regime was attacking the United States. But with this legal maneuver, Stone is inviting prosecutors to vigorously restate the key premises of their case: Russia hacked Democratic material, handed it over to WikiLeaks for public dissemination, and Stone tried to interact secretly with WikiLeaks on behalf of the Trump campaign. The prosecution might well reveal new details on how, during the campaign, Stone seemingly possessed advance information concerning WikiLeaks’ plans to post material stolen by Russian operatives and on what Stone told Trump and his aides about this.

In their motion, Stone’s lawyers argue that Special Counsel Robert Mueller has failed to make the case that Russia was behind the hacks and asserts that his conclusions rely on an initial analysis by CrowdStrike, a cybersecurity firm hired by the DNC that produced a report on the hack. But US intelligence agencies concluded in 2017 that Russian government hackers pulled off the operation. And in a detailed indictment last year of 12 alleged members of a Russian military intelligence agency, the GRU, the special counsel described how they executed the scheme. Mueller’s report says the special counsel’s office “was able to identify when the GRU (operating through its personas Guccifer 2.0 and DCLeaks) transferred some of the stolen documents to WikiLeaks through online archives set up by the GRU.” It cites a July 14 email in which Guccifer 2.0 sent WikiLeaks a file believed to contain Democratic emails. Redactions in Mueller’s report indicate the methods investigators used to gain this knowledge remain secret.

But Stone’s lawyers claim that “the government has relied on a source outside of the US intelligence community” as the foundation for its entire investigation into Russia interference and for search warrants in the Stone case. “If that foundation collapses then the warrants must fail for lack of probable cause,” they contend.

The lawyers cite affidavits by two men, William Binney and Peter Clay, who question the conclusion that the GRU carried out the DNC hack. In 2017, Binney, a former National Security Agency official, co-wrote an analysis suggesting that the DNC documents were pilfered by an insider. Clay, who describes himself as a cybersecurity expert, has offered a similar analysis. Binney’s argument helped fueled the unfounded conspiracy theory that the DNC documents were stolen by Rich, a DNC staffer who was murdered in July 2016 during a suspected robbery attempt. At Trump’s behest, Binney met in October 2017 with then-CIA Director Mike Pompeo to promote his theory. Binney told the Intercept that he mentioned Rich during the meeting.

In the summer of 2016, even as Russian hacking efforts continued, WikiLeaks founder Julian Assange promoted the Rich conspiracy theory. Mueller’s final report notes that Assange’s statements implying Rich was WikiLeaks’ source for the purloined DNC emails were “apparently designed to obscure the source of the materials that WikiLeaks was releasing.” Stone was also an early and aggressive promotor of the Rich theory. On August 9, 2016, Stone shared an image that alleged, without any evidence, that Rich was killed “on his way to meet with the FBI to discuss election fraud.” Stone tweeted the next day that Rich had “ties to DNC heist.”

Fox News, which hyped the Rich theory in 2017, retracted an article falsely reporting that the FBI had found evidence that Rich had corresponded with WikiLeaks prior to his murder. And even arch conspiracy theorist Jerome Corsi apologized to Rich’s family for promoting the conspiracy theory. But Stone has not abandoned the claim.

Stone’s filing is the latest in a series of seemingly long-shot motions by his legal team. “I think this motion is silly and has no serious chance of being granted,” says Renato Mariotti, a former federal prosecutor following the case. “The government merely had to establish probable cause—a good reason to believe—that the search [of Stone’s property] would uncover evidence of a federal crime. A federal judge found probable cause.” Yet regardless of whether the motion aids Stone’s case, it may help reveal more information on the hack-and-dump scheme. On Monday, US District Court Judge Amy Berman Jackson, who is overseeing the case, reviewed an unredacted portion of the Mueller report in preparation for ruling on the motion. And countering Stone’s filing could force prosecutors to reveal more information on Russia’s role in the hack.

Stone’s January indictment states that in June or July 2016 he began informing senior Trump campaign officials that WikiLeaks possessed documents that could be used against Clinton. It also says that after WikiLeaks released hacked DNC records ahead of the Democratic convention, “a senior Trump Campaign official was directed to contact Stone about any additional releases and what other damaging information [WikiLeaks] had regarding the Clinton Campaign.” Mueller’s report goes further. It discloses a tantalizing episode reported by Rick Gates, a top campaign official and longtime business associate of Paul Manafort who cooperated with Mueller’s probe. At some point during the campaign, Gates recalled, Trump received a phone call during a drive to the LaGuardia Airport. After the conversation, Trump told Gates that WikiLeaks would be releasing more damaging information. Redactions to this section, citing an “ongoing matter,” mask the timing of the conversation and the identity of the caller. But in all probability, Stone was on the other end of the line. In a court filing Monday, prosecutors said Gates, who is awaiting sentencing on conspiracy charges, may testify as a witness in Stone’s trial. This suggests that Stone’s prosecution is likely to reveal new information on his efforts during the 2016 campaign to serve as a go-between connecting Trump and WikiLeaks.