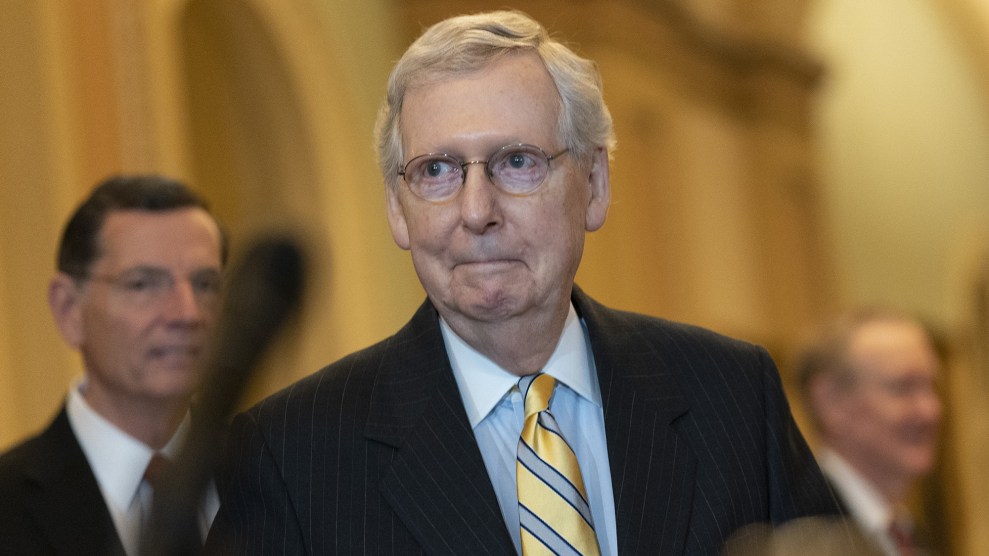 Senate Majority Leader Mitch McConnell in the US Capitol this month. Chris Kleponis/CNP via ZUMA

The Senate will not vote on any legislation to protect US elections from foreign interference, a Republican committee chair said, despite the consensus of the intelligence community that Russia will once again seek to hack election systems and manipulate American voters in 2020.

The reason, said Sen. Roy Blunt (R-Mo.) on Wednesday, is that Senate Majority Leader Mitch McConnell (R-Ky.) has decided not to bring any election security bills to the floor for a vote. Blunt’s remark occurred during a hearing of the Rules and Administration Committee, which has oversight of election administration. When Sen. Richard Durbin (D-Ill.) asked Blunt, the chairman, whether he was planning mark-ups of any of the several election security bills pending before the committee, Blunt responded that it would be fruitless to advance legislation that McConnell would not allow to come up for a vote.

“I don’t see any likelihood that those bills would get to the floor if we marked them up,” Blunt said. After prodding from Durbin, Blunt explained, “I think the majority leader just is of the view that this debate reaches no conclusion.”

Blunt also acknowledged that it was McConnell who stopped the Rules Committee last year from advancing the Secure Elections Act, a bipartisan bill to protect elections from interference. The committee was poised to mark up that bill last August when the hearing was mysteriously canceled the same morning that it was set to begin.

The decision by Republicans not to consider election security bills is frustrating to Democrats who have been cranking out bills to stop foreign interference and increase security ahead of the 2020 elections. In addition to the Secure Elections Act, the Rules Committee has failed to take up the Protecting the Right to Independent and Democratic Elections (PRIDE) Act, the Protecting American Votes and Elections (PAVE) Act, and the bipartisan Honest Ads Act, which would give online political ads the same disclosure requirements as political ads on television and other media. All three bills were introduced last year and reintroduced this year after no action was taken in the previous Congress.

Democrats are increasingly frustrated that despite the sense of urgency from law enforcement and intelligence agencies, Republicans in Congress have taken very little action on election security. Just last month, the FBI shifted additional resources toward stopping Russians from interfering in 2020. “We are very much viewing 2018 as just kind of a dress rehearsal for the big show in 2020,” Director Christopher Wray warned. But Republicans in Congress appear unwilling to cross President Donald Trump, who does not like to hear Russian election interference mentioned, according to reporting by the New York Times. Democrats in Congress say this reticence to confront the issue has trickled down, affecting not only preparedness at federal agencies but also the willingness of lawmakers to take up the issue.

“I hope you catch the irony here that at the CIA and intelligence agencies, millions of dollars are being spent to stop the Russians from making a mess of the 2020 election,” Durbin said Wednesday, “and yet, in the United States Senate, we can’t bring a bill to the floor to even debate it.”