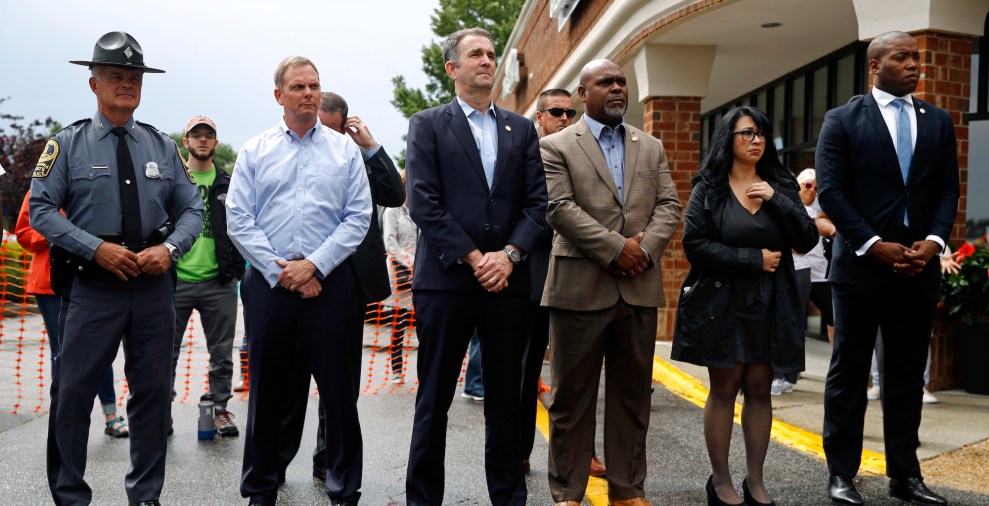 In the wake of last week’s shooting at a municipal building in Virginia Beach—which left 12 dead, making it the state’s deadliest shooting in as many years—Virginia Gov. Ralph Northam called for a special session of the state’s general assembly to pass stricter gun laws. How the state’s GOP-held legislature behaves in that session, expected to take place this month, could be a bellwether for not only the midterm elections this November, but also the high-stakes elections in 2020.

“There’s going to be substantial national coverage looking at Virginia and talking about what it means for the federal election. You’re going to see presidential candidates reflecting on it,” says Kris Brown, the president of the Brady Campaign, a national gun-violence prevention organization. “Whether or not the general assembly passes anything, there’s a huge amount at stake for gun violence prevention in [Virginia’s] upcoming election.”

Northam’s agenda for the special session includes laws to limit handgun purchases to one a month, an obligation to report lost or stolen firearms, and a ban on assault weapons and related devices like silencers and high-capacity magazines that the shooter in Virginia Beach used last Friday. He’s most likely to win over GOP supporters in his ask for universal background checks, which more than 90 percent of Virginia voters supported in a 2017 Quinnipiac poll.

But exactly what the political landscape looks like when this session convenes is yet to be seen. Virginia hosts its midterm primaries next week, and the GOP candidates who emerge victorious may offer a glimpse of the electorate’s appetite for swift reforms. Time is not on activists’ side: Survivors of mass shootings know how hard it is to keep pressure on lawmakers as the shooting recedes from headlines. A slew of scandals that have plagued Virginia’s Democrats might mean that Republicans, smelling blood in the water, will feel no need to cooperate. Gov. Northam’s approval rating tanked after it was revealed that he might have appeared in a racist photograph in his medical school yearbook, and remained low two months later, dipping below President Trump’s own dismal favorability.

“The price of retaining the Republican majority in the legislature will probably involve a serious step toward increasing gun control in the state.”

The importance of Northam’s efforts extend beyond the state, foreshadowed during the election that brought the governor into power on November 8, 2017.  That’s when something unusual happened. For the first time, gun policy ranked as the second-most important issue to Democratic voters, topped only by health care as a priority. Contrary to conventional wisdom that gun platforms appeal only to one side, Republicans and Democrats were equally represented among the voters for whom guns was their top issue.

Sen. Chris Murphy (D-Conn.), one of the most vocal gun reform advocates in Congress, tweeted an analysis of the race that night as the exit polling rolled in. He attributed that bump to Northam, then Virginia’s governor-elect, for not playing “cute or cozy” with the gun rights lobby. “Yesterday’s Virginia election shows that gun policy is just as big a driver of Democratic turnout as Republican turnout,” he wrote. “Game changer.”

Except the game didn’t change. Northam entered office with a legislature held by a narrow Republican majority. For the last two years, attempts to pass stricter gun laws have largely died in committee. But Northam’s special session presents an open question as to whether a perfect storm could finally push Republican lawmakers to pass any gun control measures.

Stephen Farnsworth, a professor of political science at the University of Mary Washington in Fredericksburg, Virginia, suggests it might: “The price of retaining the Republican majority in the legislature will probably involve a serious step toward increasing gun control in the state,” he says. “No action on gun control may very well be the issue that establishes Democratic majority control in both chambers.”

That’s a tremendous shift from the aftermath of the Virginia Tech massacre, when a shooter killed 32 people in a dormitory and an engineering classroom building in April 2007. In the wake of the tragedy, legislation to require background checks for firearms purchased at gun shows died in the state’s Senate Committee. Gun control was a nonstarter among both Democratic and Republican lawmakers in a state that is home to the National Rifle Association.

“One of our priorities over the last decade or so was to make Virginia a state where you can win on guns,” Christian Heyne, now vice president of policy at the Brady Campaign, told me last summer when he worked for the Coalition to Stop Gun Violence. “It’s a state that historically has been terrible on guns. It was hard to get meetings with the people we needed to talk to.”

But as the years wore on, the tragedy at Virginia Tech no longer looked like an anomaly. Northam, a former military physician, described his personal horrors dealing with trauma of gun violence. The October 2017 massacre at a Las Vegas music festival—the deadliest ever on US soil—bolstered Northam’s case just one month before Election Day, with Everytown for Gun Safety, the national gun reform advocacy organization founded by former New York Mayor Michael Bloomberg, pouring at least $2.3 million into his victory. While it’s hard to argue that Democrats’ 2017 successes in Virginia are owed to anything other than antipathy for President Donald Trump, the resonance of the gun issue with Democratic voters indicated a shift.

“Ralph Northam differentiated himself on the issue of gun violence prevention—he put it at the top of his candidacy,” Brown, the Brady Campaign’s president, says. “Las Vegas permeated people’s conscious around the need for gun violence protection and getting protections in place.”

But what will happen during this legislative session may not result in any party reorientation. Farnsworth speculates that some anti-Trump Republicans representing the commonwealth’s fast-growing, ever-bluer suburban districts will peel off to support gun measures, but not the party as a whole. A similar dynamic played out in the state’s march toward Medicaid expansion in 2017: While the state party maintained a staunch aversion to that provision of the Affordable Care Act, a number of GOP lawmakers backed the popular measures.

“While Republicans disagree about gun policy,” Farnsworth says, “there will be high consensus among Republicans that they want to stay in power.”

What they can count on is that gun reform activists will be watching closely. When their issue emerged victorious in the state’s 2017 elections, they poured over the results to suggest how the electorate might behave in the 2018 midterms. They will likely do the same when the 2019 ballots roll in, and this time, for even higher stakes with the presidency up for grabs.