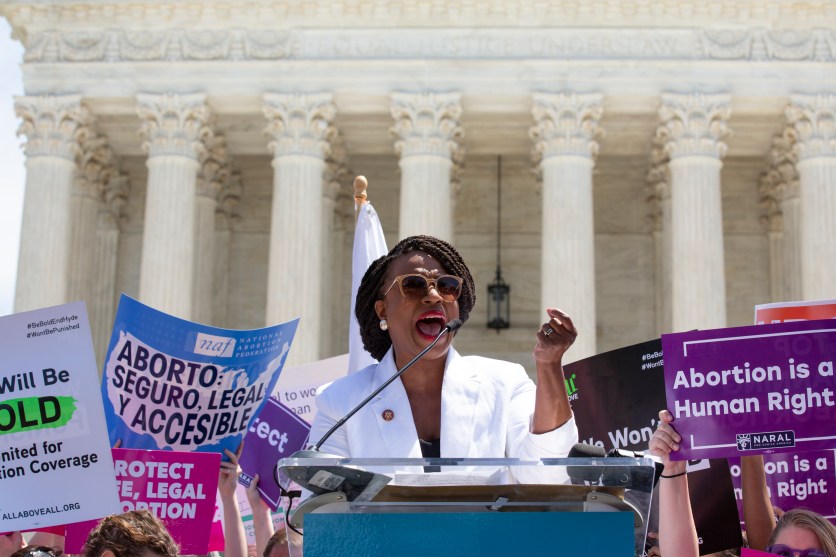 Rep. Ayanna Pressley speaks to demonstrators outside of the Supreme Court on May 21, 2019.Stefani Reynolds/AP

The Democratic majority in the US House appears likely to pass a spending bill which will include the Hyde Amendment, a measure that blocks federal funds from being spent on abortions, despite clear opposition from the the party’s base and from 2020 candidates.

On Tuesday, Rep. Ayanna Pressley’s (D-Mass.) proposal to strip the Hyde Amendment from an upcoming must-pass spending bill was rejected by the House Committee on Rules on a point of order. The spending bill, which includes funding for Health and Human Services and other Democratic priorities, is now likely to proceed with the Hyde language intact.

“My amendment to repeal Hyde is only one of many tools Democrats are using to fight back” Pressley said in a statement. “The Hyde Amendment’s days are numbered and we will fight in the name of reproductive justice on every front.”

House leadership has been hesitant to take up a fight over the Hyde Amendment. “I wish we never had a Hyde Amendment,” House Speaker Nancy Pelosi said on Tuesday at The Peter G. Peterson foundation summit, “but it is the law of the land right now and I don’t see that there is an opportunity to get rid of it with the current occupant of the White House and some in the United States Senate.”

However, Democratic 2020 candidates have not shied away from discussing the issue. Last week, former Vice President Joe Biden reversed his position on the Hyde Amendment after facing major backlash for publicly coming out in support of it. “If I believe health care is a right, as I do, I can no longer support an amendment that makes that right dependent on someone’s ZIP code,” Biden told supporters last Thursday. Right now, all of the frontrunners in the 2020 democratic field—including Bernie Sanders, Kamala Harris, Pete Buttigieg, and Elizabeth Warren—have voiced their support for repealing Hyde.

“The Hyde Amendment’s days are numbered and we will fight in the name of reproductive justice on every front.”

Activist involved in the reproductive rights movement are glad that the Hyde amendment has been a part of the national dialogue. “We’re really heartened about the conversation that’s happening at the national level,” says Destiny Lopez co-director of All*Above All, a national organization dedicated to repealing the Hyde Amendment. “People inherently understand that this is about fair treatment and they want policies that will ensure that people have the full range of reproductive health care.”

The Hyde Amendment was introduced in 1973 by Republican Rep. Henry Hyde as a way to block Medicaid dollars from being used to cover abortions in lieu of being able to ban abortion outright. Currently, 15 states use their own Medicaid funds to cover abortions, but this means that in the other 35 states and the District of Columbia, someone who gets their health care coverage through Medicaid does not qualify for abortion coverage, with some limited exemptions.

Lopez’s organization believes that once voters understand the full impact of the Hyde Amendment they won’t support it. “Essentially,” Lopez says, “we’ve created this really discriminatory system based on where you live and how much money you make and your type of insurance.”

For many people, getting an abortion without health insurance can be cost prohibitive. In the first trimester, an abortion can cost anywhere from $75 to $1,633. However, late-first trimester or second trimester abortions can run up to $3,000 or more. This does not include travel fees, hotel costs, childcare fees, or the time-off work. “The cost of the abortion is one thing,” Lopez explains, “but there are a number of expenses anyone seeking abortion is going to face particularly if you’re already struggling to make ends meet.”

“[Hyde] is perpetuating cycles and systems of poverty,” Lopez says. “We know that if a person is denied abortion access it is likely that they will go deeper into poverty and so you know it is a very systemic problem, and I would argue a racist policy, because it primarily targets black and brown people.”

Despite the failure to get the Hyde amendment taken off the spending bill, Lopez sees progress on this issue. “I think that for a long time our movement called folks pro-choice who maybe still supported the Hyde Amendment,” Lopez says, “and I think that dynamic is changing. It is harder and harder to say that you support abortion rights and still support Hyde.”

Pressley, for her part, has not taken this legislative defeat lying down, and says she is committed to fighting against Hyde and other restrictions on abortion access. “We are actively mobilizing and organizing to ensure that every person has access to self-determination and bodily autonomy, regardless of where they live, how much money they make, or their preferred pronouns,” Pressley said in a statement.