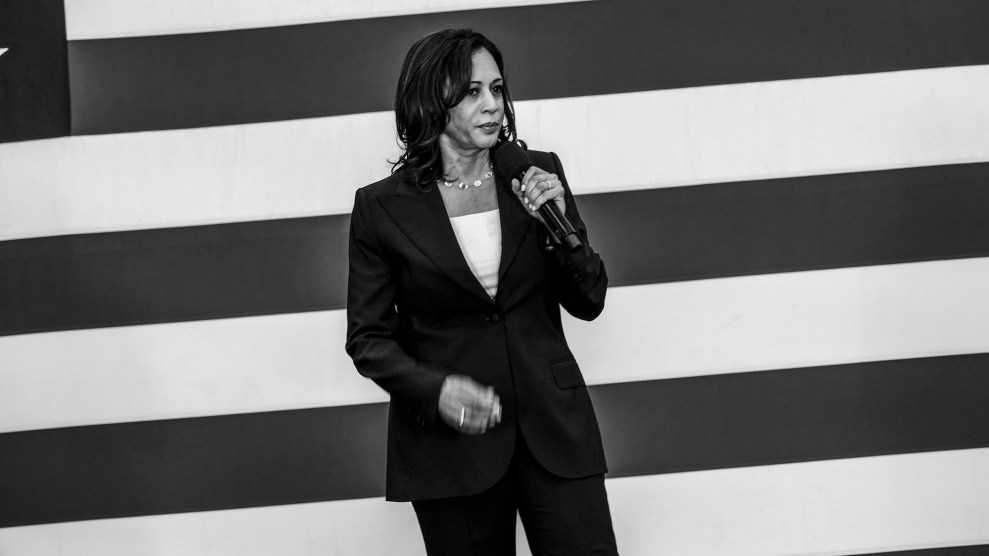 Senator and Democratic presidential candidate Kamala Harris speaks to a crowd of supporters in Los Angeles on May 19. Jason Ryan/ZUMA

Democratic presidential candidate Kamala Harris may have crossed a line this week when she said that she believes the Justice Department should prosecute Donald Trump when he leaves office, legal ethics experts say. By prejudging Justice Department decisions, they worry, Harris—and other candidates who will be asked about prosecuting Trump—could inject politics into what are supposed to be apolitical judgments and potentially even give Trump’s lawyers fodder for their defense in the event of a prosecution.

Harris was making an appearance on NPR’s politics podcast when she got a question every candidate should now be prepared to answer: “If you become president, if [Trump] was never impeached, would you want the Department of Justice, now that he is no longer a sitting president, to go forward with those obstruction of justice charges?”

Harris responded, “I believe that they would have no choice and that they should, yes. There has to be accountability.” Then She added, “The president is not above the law.”

Back in 2016, it was candidate Trump who broke the post-Watergate norms that wall off the Justice Department from the politics of the White House when he made “Lock her up!” chants a feature of his campaign rallies and suggested in a debate that if he won, Hillary Clinton would go to prison. Those conventions have continued to erode now that Trump is president: He has pressured law enforcement officials at the Justice Department to pursue some investigations (of Clinton and other Democrats) while forgoing others (asking then-FBI Director James Comey to go easy on his former national security adviser, Michael Flynn). Legal experts hope that the next president will return to ensuring that the government’s prosecutorial powers are not political weapons.

“It’s unfortunate that she said that, because if she is elected, it will be important to restore the prior status quo before Trump,” says Washington University’s Kathleen Clark.

Which is why some are perturbed by Harris’ comments, which they think risk politicizing prosecutions. “I think her comments do unfortunately run afoul of that important norm,” says Andrew Kent, an expert in legal ethics at Fordham University School of Law.

He added, “I think a better answer to the question is something along the lines of, ‘I would leave that to the Department of Justice to decide what’s appropriate. Unlike President Trump, I’m not going to try to dictate prosecutorial outcomes in individual cases.'”

“It’s unfortunate that she said that, because if she is elected, it will be important to restore the prior status quo before Trump,” says Kathleen Clark, an expert in government ethics at Washington University in St. Louis School of Law, “where presidents don’t tell the Justice Department who to prosecute.” Instead of restoring the post-Watergate order of depoliticizing the Justice Department, Clark says, Harris’ comments could be seen by voters as suggesting that Trump’s way of doing things is okay.

Neither Kent nor Clark believes that Harris’ comments would induce a judge to toss out a case against Trump, in the scenario in which Harris is president and federal prosecutors indict him. But such comments would certainly be used by Trump’s lawyers to try to make the case that any prosecution against him is political—a case Trump already makes against the Mueller report and Democratic investigations almost daily.

Eric Columbus, a former counsel at the Justice Department and Department of Homeland Security under President Barack Obama, did not interpret Harris’ comment to mean she would abandon Justice Department independence the way Trump has. “I assume that, as a staunch critic of Trump’s politicization of the Department of Justice, a President Harris would allow the attorney general to make the call on whether to prosecute Trump,” he says, “because deferring to DOJ would help reinstate institutional norms that Trump has trampled on.” But, he adds, he would advocate a softer approach for candidates in the future. “It would be best if presidential candidates would decline to answer questions about prosecuting Trump beyond pledging that, unlike Trump, they won’t interfere with DOJ’s decision making as to criminal investigations and prosecutions,” he says.

Harris isn’t the only Democratic presidential contender to weigh in on prosecuting Trump. Pete Buttigieg and Beto O’Rourke have also been asked this question. Buttigieg told The Atlantic, “To the extent that there’s an obstruction case, then yes, DOJ’s got to deal with it.” He added, “I would want any credible allegation of criminal behavior to be investigated to the fullest.” But he also stressed the need to get politics out of the criminal process. “The less it’s done out of the DOJ, the better, because the further away it is from the political body, the better,” he said, suggesting that US attorneys, who are technically part of the Justice Department, could take up the issue.

O’Rourke said on ABC that he believes Trump committed crimes that could be prosecuted. But asked if his own Justice Department should pursue those charges, O’Rourke was more cautious. “I would want my Justice Department, any future administration’s Justice Department, to follow the facts and the truth and to make sure at the end of the day that there is accountability and justice without this idea, this experiment of American democracy comes to a close,” he replied.

The question about whether a Democratic president would prosecute Trump is a tricky one politically because it pits the ethics of the presidency against the desire of many Democratic voters to see Trump held accountable for possible crimes, including the obstruction of justice case laid out in the Mueller report.

This story has been updated to include comments from Buttigieg and O’Rourke.