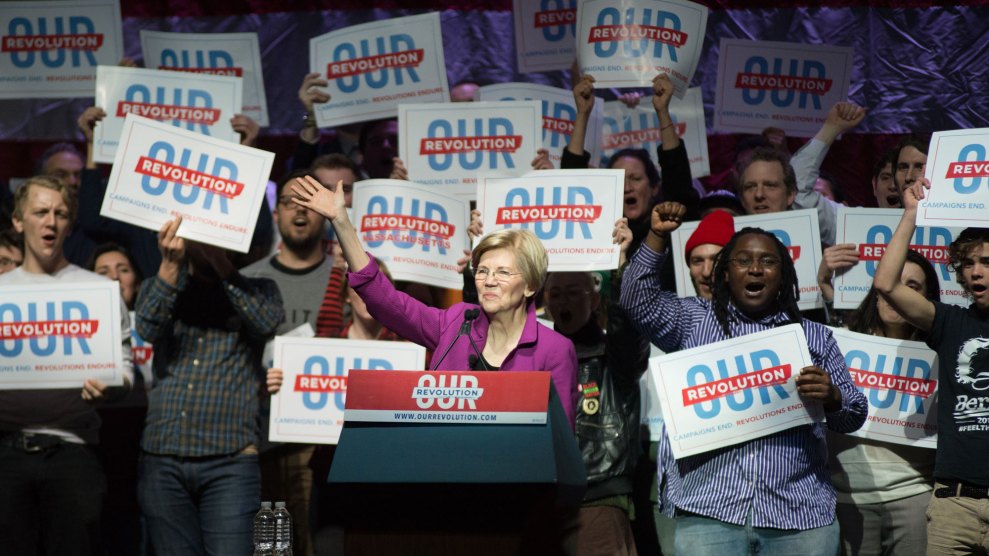 Four years ago, Francis Beylotte was proud to support Vermont Sen. Bernie Sanders in the South Carolina Democratic primary. Now, the Charleston progressive activist is ready to cast his vote once more for a candidate who’s expressed support for a single-payer health-care system and wants to push back against the power of large corporations. But this time, that candidate is Elizabeth Warren.

After meeting both senators at events this year—Sanders once, Warren twice—Beylotte was won over by the Massachusetts Democrat’s warmth and policy chops.

“Warren feels like a friend,” Beylotte said when we met Saturday at the South Carolina Democratic Party Convention, where he was a delegate. “And I like the plans. Plans are a big deal.”

“Bernie had a good chance,” he added. “It didn’t work out. Let somebody take mantle and move forward. When I saw Bernie earlier, I just thought, ‘Imagine that, but a woman.’ And that’s what Warren is.”

Sanders struggled mightily in South Carolina in 2016, losing the crucial early primary state to Hillary Clinton by 47.5 percentage points. With four more years to introduce himself to voters in the state, and the Clinton name no longer on the ballot, Sanders entered this campaign with high expectations. But as he seeks to widen his base of support in a more crowded field, there are also signs that other candidates have begun to chip away at his already small group of voters in the state. Two polls in the last two weeks have shown Warren leapfrogging Sanders into second place in South Carolina, consistent with trends that show her closing the gap nationally on her Capitol Hill ally. On Tuesday the progressive group MoveOn released a straw poll of its members showing Warren leading in the state and Sanders far behind in fourth place.

Jan Leonard, the outgoing president of the group Charleston County Democratic Women, recently made the switch from Sanders after a recent meeting with Warren. Her husband did too.

“And he was a much bigger Bernie fan than I was,” she told me.

Leonard’s reason for doing so was a reflection of both Sanders’ success and the challenge he now faces at a time when he no longer has the party’s progressive flank to himself.

“I felt he would help push the party left,” she said of Sanders. “I feel now that that has been done to a great degree.”

The specificity of Warren’s policy proposals is a major draw for Leonard, who singled out the senator’s plan for a wealth tax—a 2-percent annual levy on net worth over $50 million—and universal pre-K child care. But Warren also offers something Sanders can’t.

“We keep running the same people over and over again, and it’s time for some new faces.”

The ex-Berniecrats I spoke to hadn’t exactly soured on Sanders. But with an expanded field, they were finding candidates who more specifically fit what they were looking for in a vastly changed political climate. “[Joe Biden] and Bernie Sanders both are too old,” Sarah Kennery, another 2016 Sanders voter I met in Columbia, said. Right now she likes Warren and Marianne Williamson, a long-shot candidate and wellness guru.

Martha Brock, a former Sanders supporter who had taken a chartered bus down from North Carolina for a candidate forum sponsored by Planned Parenthood, was trying to settle on a short-list of five candidates that included Warren and former HUD Secretary Julian Castro. For now, Sanders wasn’t on it.

“We keep running the same people over and over again, and it’s time for some new faces,” she said.

During Saturday’s festivities, one 2016 Sanders supporter was walking around the Columbia convention center in a blue t-shirt that said: “No old white men.” He, too, was backing Warren.

Sanders had the insurgent vote to himself in 2016, but he won’t have that advantage this time around as he looks to make up ground against Biden, the current frontrunner. (For what it’s worth, none of these ex-Sanders supporters said were leaning toward Biden in the primary.) Still, even as he risks losing ground among his base, the departure of the Clintons from the scene has left a void that Biden alone can’t fill. And there are signs Sanders might get a second chance to win over at least some Democrats who voted for the former secretary of State.

On Sunday, a day after the convention, Sanders was the only top-tier candidate with a public event scheduled, a town hall in the Charlotte suburb of Rock Hill. Apart from the usual die-hards, the audience included a large number of undecided voters who were taking a second look at the candidate they’d passed over in 2016. Cindy Butterworth, a one-time Clinton supporter, told me Sanders had grown on her since the primary four years ago, when she’d considered him “fringe.” Another Clinton voter, Lane Moore, was taking a flyer on a candidate her son and his fiancée couldn’t stop talking about.

To Jerome Fisher from Rock Hill, Sanders was an unknown commodity in 2016. He cast his vote for the familiar face, Clinton. But Fisher, who said he’s skeptical of Biden, has since grown more receptive to Sanders. He wanted to hear the Vermonter explain how he would fight for seniors and, as he put it, “why I should put him in my life.” He came away impressed.

“At the moment, yeah, I would vote for him,” Fisher said when Sanders wrapped up his remarks.