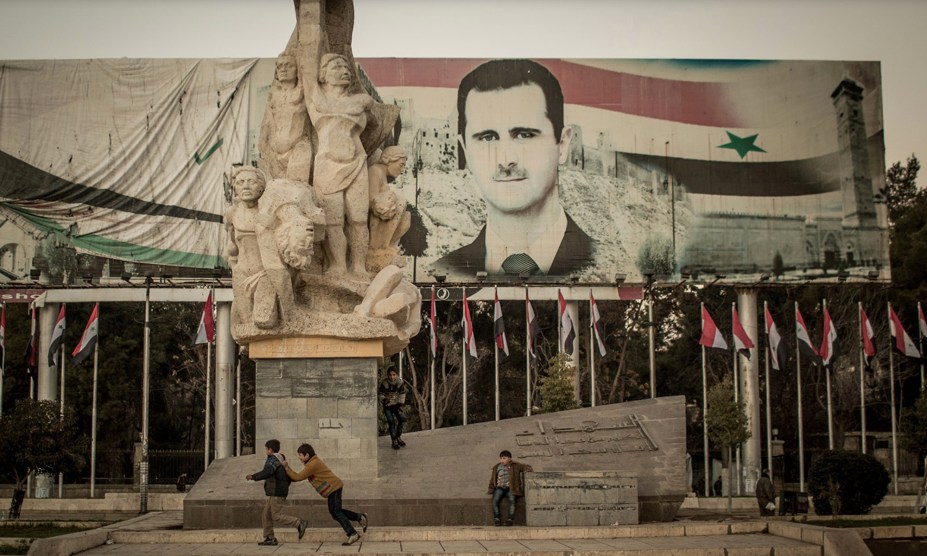 Last year, Mother Jones senior reporter Shane Bauer traveled to Syria to get a firsthand look at a conflict that’s killed more than 500,000 people and displaced 12 million people. In particular, he wanted to get a better understanding of American involvement in a war that can seem “complicated to the point of absurdity.” He wasn’t just interested in official US involvement, which has included airstrikes against ISIS and President Bashar al-Assad, special forces on the ground, and a massive CIA program to arm anti-government rebels. He also went looking for the stories of Americans who have slipped into Syria as well as the stories of Syrians who have taken up US-supplied weapons and survived American bombs. His investigation was published in the two most recent issues of Mother Jones, and we’ve just put the entire series online in two parts.

Okay, it’s a serious longread. You can drop into it at any point and find something gripping, moving, or eye-opening, though I’d recommend reading it from start to finish. (Don’t worry, we built in some breaks.) If you want to know what to expect—or just want to know what you’re missing—here are five key parts from “Behind the Lines”:

Though it began as a revolt against the government, the Syrian conflict is not a simple, two-sided affair. Keeping track of all the players and their competing agendas and alliances isn’t easy (but here’s a handy guide). Early on, the Obama administration openly called for the end of the Assad regime. To speed things along, the CIA set up a $1 billion program to arm Syrian rebels. But as more Islamists joined the opposition, things got messy. “Alarm bells were beginning to go off,” recalled Alexander Bick, the former director for Syria at the National Security Council. “If you’re going to give support to the opposition, you want to be confident that support is going to people that you trust.”

Syrian rebels told Bauer how US-supplied weapons helped on the battlefield—but also were sold and given away to unapproved groups, including an Al Qaeda affiliate. “It was a type of Arab hospitality,” one rebel commander said jokingly, “but on the Americans’ tab.” President Donald Trump ended the CIA arms program in 2017, cementing the US shift away from weakening Assad and toward defeating ISIS. In this fight, the United States has allied with the Syrian Democratic Forces (SDF), a Kurdish-led alliance that now controls much of northeastern Syria. Yet as Trump promises to withdraw US forces from Syria, the future of its most successful ally is uncertain: The Syrian government, backed by Russia, and Turkey, a key US ally, have threatened to invade the Kurds’ stronghold.

The saga of Samantha Elhassani

In a refugee camp in northeastern Syria, Bauer met Samantha Elhassani, a young woman from Indiana, who tells him that she and her four children had spent two years inside Raqqa. In one of her first interviews since she escaped the Islamic State, Elhassani told Bauer a harrowing, at times improbable, story: She said her husband had secretly decided to join ISIS and had lured her into ISIS territory. “I was not aware we were coming to Syria,” she claimed. She said she was tortured by ISIS and that her husband bought three child slaves before being killed in battle.

Two months after Elhassani spoke with Bauer, the US government flew her back to States and charged her with violating federal terrorism laws. Prosecutors have said she went along with her husband’s plans and “brought her children along for the treacherous ride.” Her lawyers say she was abused and coerced by her “big pig of a husband.” Bauer tracked down family and friends of Elhassani who painted a complex picture of a woman whose Syrian misadventure does not seem to be inspired by religion, politics, or ideology. “This did not start in even the last 10 years,” her sister told Bauer. “This started way back when we were younger.”

The battle for Syria’s oil and gas

When Bauer entered Syria through SDF-held territory, he observed this exchange between an Arab man and a Kurdish border guard as they discussed whether US forces would soon withdraw, as Trump had promised:

“Maybe they will leave,” the Arab man says.
“No!” exclaims the wrinkled border guard.
“We have oil, so much oil,” the Arab says. “Let them stay and take the oil.”

While Syria’s prewar oil and gas industry was relatively small, the country’s fossil fuel reserves have played a key role in the conflict and the United States’ involvement in it. In eastern Syria, Bauer visited a fought-over site that’s changed hands several times: “It’s known by the name of the American company that developed it— Conoco—and at various points it’s been under the control of the Syrian government, the FSA [Free Syrian Army], an Al Qaeda affiliate, ISIS, and the SDF. Over the past two years, American- and Russian-backed forces have fought for control of Conoco and two nearby oil fields, each with air support from their superpower patrons.” In February 2018, Conoco was the site of a brief but bloody battle in which US forces and their allies fought off hundreds of pro-Assad fighters and Russian mercenaries. When then-Defense Secretary James Mattis was asked why the facility had been targeted, he played coy: “I have no idea why they would attack there.”

Fighting for anarchy in Syria

One result of the Syrian civil war has been the creation of Rojava, a region in northeast Syria where Kurdish nationalists have set up an experiment in semi-autonomous government—and near-independence. Rojava and its supposedly decentralized political philosophy have attracted anarchists from the United States and Europe who have fought with the Kurdish militia known as the YPG (People’s Protection Units). Bauer went looking for some of these volunteers and met up with Barry, a twentysomething American who says that joining the YPG is “the best thing someone who considers themselves a militant leftist can do right now with their life.”

Barry has fought alongside troops armed with US-supplied weapons and his commanders call in air support from US jets. But he doesn’t see his mission as an extension of American foreign policy. The US military, he told Bauer, “have no allegiance to the Kurds…The only reason they care about YPG at this point is because we’re the best vehicle to fight a common enemy. That’s all.” It’s not clear if his stint could land him in trouble when he comes home; so far, no American YPG volunteers have been prosecuted. Things got prickly when Bauer confronted Barry and his Western comrades about Rojava’s authoritarian tendencies, like imprisoning journalists. “Certain people who do certain actions void certain rights,” Barry told him. “I wholly think they deserve it. I have absolutely no sympathies for them.”

The costs of inaction and involvement

Looking back at the past seven years, did the US government get too involved in Syria or did it not do enough? “The only thing that seemed worse than getting sucked into the conflict was not getting involved at all,” Bauer writes. As a result, “American involvement in Syria has been as fragmented and volatile as the conflict itself.”

In his article, he details the fallout from President Barack Obama’s 2012 promise to use force if Assad crossed the “red line” of using chemical weapons. Yet when Syria crossed that line with a sarin attack on Ghouta in 2013, Obama chose not to attack. “We were so pissed off,” one survivor told Bauer. “We lost hope. Obama, the most powerful person in the whole world, didn’t even want to do anything to Bashar.” In April 2017, President Donald Trump, who had criticized Obama’s “very dumb RED LINE statement,” launched the first in a series of airstrikes in response to Syrian chemical attacks.

With time, the US focus in Syria shifted to defeating ISIS. The Pentagon’s campaign against ISIS launched more than 19,000 airstrikes and cost $54 billion in Syria. But in Raqqa, the former de facto capital of the Islamic State, ISIS and the bombardment that drove it from the city were not so quickly forgotten. When Bauer arrived in the city, more than 80 percent of its buildings were destroyed or damaged. He visited the tunnels where ISIS fighters hid from US jets and followed a crew that was still clearing bodies from the rubble. Just how many civilians died in the US-led assault is not clear: The US-led coalition has acknowledged 180 deaths; independent monitors say there were least 1,600. “We had to get [ISIS] out of Raqqa,” Brett McGurk, the presidential envoy to the anti-ISIS coalition at the time, told Bauer. “We did it without costing any American lives. It all kind of went according to plan.” As a Syrian first responder said, “Our city was destroyed so that America could sleep soundly.”