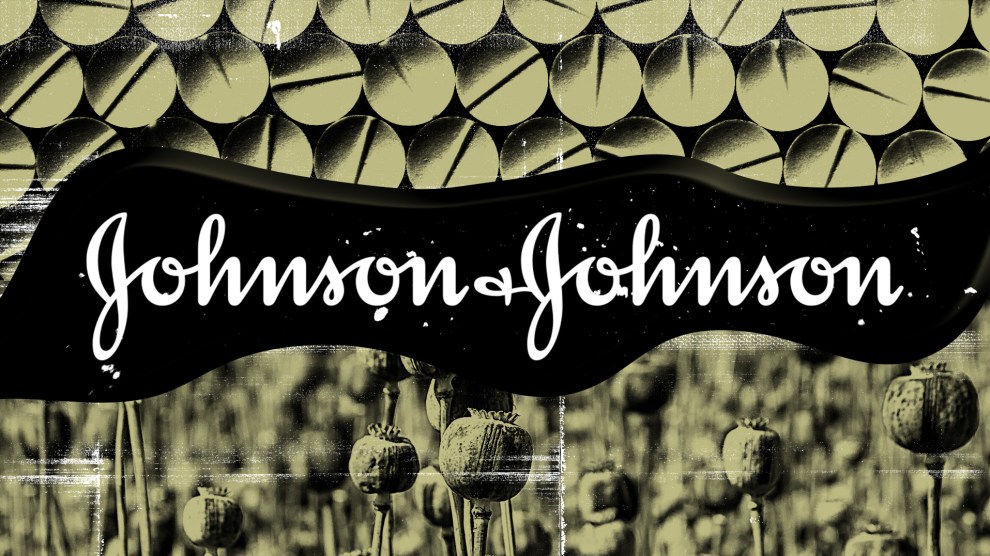 Johnson and Johnson, the company best known for its baby powder and soap, quietly dominated the opioid market for years, growing poppies in Tasmania and selling narcotics to leading drug companies, including OxyContin maker Purdue Pharma.

“It was influences from companies like Johnson and Johnson that infiltrated and spread like a virus of ideas in everybody’s mind—and became the fabric of how we developed the science,” testified one pain doctor.

That’s according to evidence presented by lawyers for Oklahoma in an ongoing trial—the first of nearly 1,900 federal and state cases nationwide against opioid makers claiming that the companies fueled a devastating and costly public health crisis. Purdue Pharma and Teva Pharmaceuticals, also named in the Oklahoma suit, settled last spring, leaving Johnson and Johnson and its pharmaceutical subsidiary, Janssen, to face charges that they created a “public nuisance.”

Some allegations presented in the first two weeks of the trial resemble those of other high-profile opioid cases: that Johnson and Johnson oversold its own opioid products, Nucynta and Duragesic, by targeting high-volume prescribers, paying key opinion leaders, funding pain patient advocacy groups, and generally promoting the idea that opioids were safe and effective for chronic pain. “It was influences from companies like Johnson and Johnson that infiltrated and spread like a virus of ideas in everybody’s mind—and became the fabric of how we developed the science,” testified Dr. Danesh Mazloomdoost, a pain medicine doctor and witness for the state, last week.

But some of the charges are unique to the family-owned company thanks to its dual roles as opioid supplier and pharmaceutical giant. Here are some key takeaways from the trial so far.

Much of Johnson and Johnson’s success in the opioid market was due to its poppy innovation. In the mid-90s, a Johnson and Johnson subsidiary called Tasmanian Alkaloids developed the Norman poppy, a strain of the plant that didn’t contain morphine, the precursor to heroin, and instead was high in thebaine, an opiate used as a starting point in many painkillers. The advent of the Norman poppy coincided with an exploding demand for thebaine: In 1995, Purdue Pharma released OxyContin and launched a historic marketing blitz that helped sow the seeds of today’s opioid epidemic.

Exhibits shown at the Oklahoma trial suggest that Purdue’s growth relied largely on Johnson and Johnson’s thebaine supply. A 1998 letter from an executive from Noramco, another Johnson and Johnson subsidiary, to Purdue Frederick Laboratories (later Purdue Pharma) read, “Noramco will work with PF Laboratories to secure its entire, worldwide requirements. This is not a minor point. As we have discussed, access to raw materials is going to be critical to obtaining security of supply.” It goes on, “gaining access to raw materials on a worldwide basis…simply cannot be provided by any other company.”

Business thrived in the coming years: By 2016, when Johnson and Johnson sold Noramco and Tasmanian Alkaloids to a private investment firm, Noramco was allegedly the nation’s top supplier of opioids, including oxycodone (found in OxyContin and Percocet), hydrocodone (found in Vicodin), codeine, and morphine. According to a 2015 Noramco presentation preparing for the company’s sale, the future purchaser had the opportunity to “Acquire the #1 supplier of Narcotic [active pharmaceutical ingredients] in the United States, the world’s largest market” and “become a key supplier to the world’s largest multi-source generics.”

Below is a portion of the presentation (highlights in this and other documents were added by the plaintiffs):

Johnson and Johnson lawyer John Sparks noted in a statement that Noramco’s output was tightly regulated by the Food and Drug Administration and the Drug Enforcement Administration, and that the company “did not manufacture, sell, or market the FDA-approved medicines made by other companies that used Noramco [ingredients].” The medications manufactured and sold by Johnson and Johnson, he added, accounted for less than one percent of the nation’s opioid market.

“We will surpass Half-a-Billion Dollars in Sales!”

In the late ’90s and early 2000s, many opioid makers launched marketing campaigns that closely resembled Purdue’s exceedingly successful OxyContin launch. In an effort to boost Duragesic prescriptions, a team of Janssen sales representatives called on doctors across Oklahoma to “convince them that Duragesic is effective and safe to use” for chronic pain conditions, court documents show.

Of particular interest to Janssen were doctors with a track record of prescribing large amounts of OxyContin, as the same physicians may be willing to switch to Duragesic. A market update in 2001 encouraged the sales reps to continue targeting the top 1,000 opioid prescribers, as they accounted for 20 percent of “all the dollars in the pain market.” It concluded, “Thanks to you, 2001 promises to be an exciting time for Duragesic—we will surpass Half-a-Billion Dollars in Sales!”

The reps wrote notes after each call, copies of which were stacked in boxes in the Norman, Oklahoma courtroom. Many notes describe doctors wary of opioids’ addictive effects. After sharing a long lunch with a physician in 2003, one sales rep wrote, “Seems a bit nervous about higher doses of [Duragesic] or [Oxycontin.] Somewhat concerned about abuse…Need to continue to bring up his comfort level for using higher doses of [Duragesic] when necessary.” The rep reassured another prescriber that “when someone does divert it’s usually not repeated,” as drug diversion was typically “either fatal or they do not get affect they are looking for.”

In 2002, Johnson and Johnson held a series of workshops with consulting giant McKinsey & Company. According to court documents, the group explored questions including, “Are certain physician specialties more or less likely to prescribe long-acting opioids? Can we influence flows to take advantage of this difference?”

In an effort to increase the number of patients using Duragesic, McKinsey suggested, “Target high abuse-risk patients (e.g., males under 40).”

The suggestion was based on the belief that Duragesic was harder to abuse than other opioids on the market, explained a McKinsey spokesman. He added that McKinsey, which also worked with Purdue Pharma to increase OxyContin sales, no longer advises clients on “opioid-specific business.”

In trial, Johnson and Johnson representative Kimberly Deem-Eshleman denied that the company ever targeted patients at high risk of abuse. When it came to marketing, the company “took steps to educate doctors so they could make informed treatment decisions,” concluded Sparks, the defense counsel. “That’s what you’d expect a responsible company to do.”