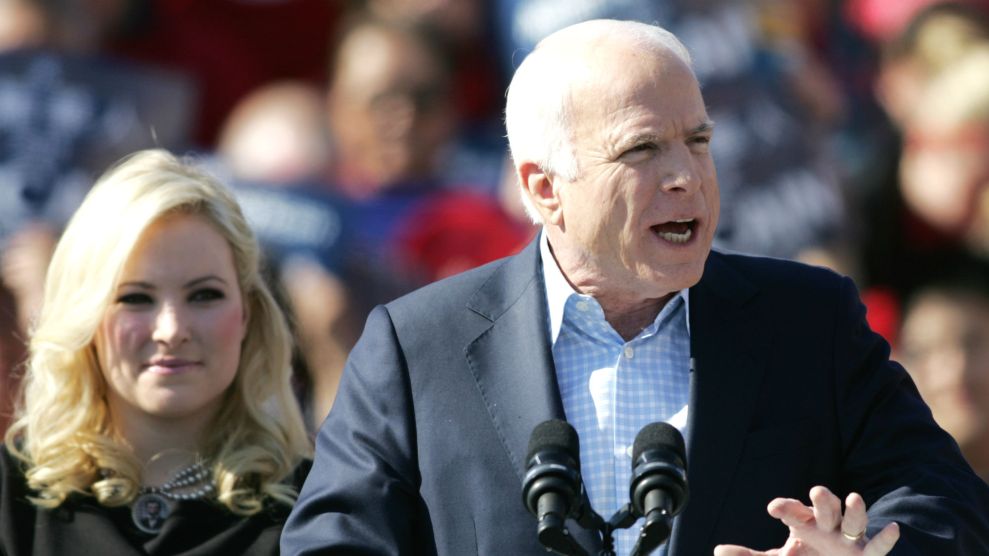 Meghan McCain, the daughter of Arizona Senator John McCain who died of brain cancer in August 2018, on Wednesday asked her Twitter followers in the “#DeadDadsClub” to share stories of their dead fathers on her timeline ahead of Father’s Day.

“Anyone else out there who is dreading Father’s Day this Sunday – I feel you, and have been trying to come up with something positive to do Sunday,” she wrote. “Maybe we will all feel less alone?” What the co-host of The View may not have expected, perhaps, is the outpouring of support and personal stories thousands of her followers shared in response to her tweet.

Anyone else out there who is dreading Father’s Day this Sunday – I feel you, and have been trying to come up with something positive to do Sunday. So, I want you to feel free to share #deaddadsclub stories on my timeline and I will share it. Maybe we will all feel less alone? ♥️

McCain’s ask came a few days before President Donald Trump’s critics decided to dub Friday, June 14, #JohnMcCainDay, in an apparent effort to troll the president on his birthday. Started by Andy Lassner, the executive producer of The Ellen DeGeneres Show, the hashtag went viral.

I’m sure this would mean a lot to patriot like Donald Trump. #JohnMcCainDay

(It’s no secret that Trump wasn’t a fan of the senator when he was alive, a feud which continued past McCain’s death. In May, the president’s staff reportedly asked the Navy for the USS John S. McCain to be out of sight ahead of the president’s visit to Japan.)

The Census Bureau announced Saturday that more than 60 percent of the 121 million men in the United States are fathers, the Associated Press reports. In honor of fatherless children, and belatedly, #JohnMcCainDay, here are some of the moving and remarkable stories shared on Meghan McCain’s timeline:

My dad died unexpectedly 10 months before my wedding. 14 years later and I still can’t watch a father/daughter dance. I always leave the room and cry. Thinking of you this Sunday …. #deaddadsclub

My father died the day before my wedding of emphysema after a long battle. I knew he would never walk me down the aisle as I sat by his bedside and addressed my wedding invitations. My wedding and my father’s death will always be intermingled. My marriage didn’t last either.

My Dad 86, died from cancer 6.25.18. I was former Navy. Retired from 2nd career 10 days before he passed. He was the best Dad to his only child, me. I was blessed to have a Dad who loved me unconditionally. He loved his grandchildren, great grandkids and son in law. #deaddadsclub pic.twitter.com/Bgqaaj6sTY

My dad passed 5 years ago on June 18th a few days after Father’s Day. I spend the day as normal as I can but give myself one hour doing something my father enjoyed. This year, by complete coincidence, I am playing basketball – the sport he taught me as a young girl #deaddadsclub

My dad, an Air Force fighter pilot, died in a plane crash 31 years ago. I was young so I barely knew him but have a few amazing memories. Even though I’ve been a member of #deaddadsclub for awhile, it’s still painful. My heart goes out to you, the McCain family, & all in the club pic.twitter.com/PoGiqkW7tr

I lost my dad to glioblastoma when I was 13 years old, on October 19th, 2004. I miss his voice and the feel of his scruffy cheeks on mine when he would give me a hug. He gave so much to his kids. Hardest part is knowing that my daughters never met him. #deaddadsclub

My dad died on 8/15/18 after a 3 1/2 year battle with cancer. I treasure my memories of him. He did not want us to mourn, but remember him in simple ways. He was a proud US Marine. My heart is broken. pic.twitter.com/0TMMaimGRm

It’s been 16 years since my dad passed. I struggle to recall the detail of my fondest memories. I don’t have a good answer re Father’s Day. I still break down on occasion. But I try to be like him for my kids and now my two grandkids and it makes me feel like I’m honoring him.

This is my father, Jack Bernard Gaines. Losing both parents to cancer by the time I was 26, I empathize and admire your courage in sharing. They both taught me to find my “Safety in Self” and “… finish what’s begun; before our days are done. We must be true.” #deaddadsclub pic.twitter.com/JMeGIylnrR

My dad passed away last September, a few weeks before his 92nd birthday. I was able to spend some time with him in the days before he passed, and I will always treasure that.

Try not to dread Father’s Day though. Bask in the memories of your shared experiences. #deaddadsclub

This handsome gentleman is my dad, Gary Lukatch. He very unexpectedly died on April 1, 2019 while on holiday in Beruit, Lebanon. He was 75 years old, and Lebanon was the 75th country he had visited. I am still in shock and miss him every minute. ❤️😢 pic.twitter.com/3Gv1LCuYk6

He would always call me peanut. Even in my 30s. #deaddadsclub pic.twitter.com/dkhWjmUc6u

This is a photo of me and my father at my Bar Mitzvah. He passed away suddenly last March in 2018. He was only 67. I was only 24. Not a minute goes by where I’m not missing nor thinking of him pic.twitter.com/PhlQ1tvYae

I lost my Dad on March 14th this year. He was 90 years old. He loved the @Raptors and it breaks my heart knowing he isn’t here to watch them play in the finals. He had the best sense of humour even making us laugh a few days before he died. I miss him so much. 💔😥#deaddadsclub pic.twitter.com/ckGVXgQaFH