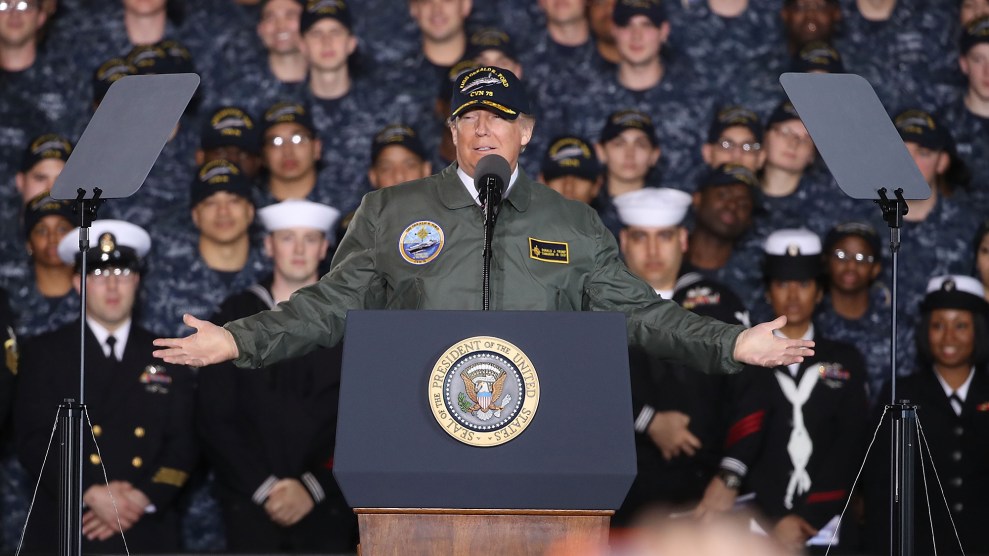 President Donald Trump speaks to members of the US Navy and shipyard workers on board the USS Gerald R. Ford on March 2, 2017, in Newport News, Virginia.Mark Wilson/Getty Images

The Pentagon appears unhappy with the White House, following an incident in which it asked the US Navy to hide a warship named after the late Sen. John McCain (R-Ariz.), one of Donald Trump’s political rivals, last weekend while the president was visiting Japan.

After asking his chief of staff to look into it, Acting Defense Secretary Patrick Shanahan rebuked the White House military office for making the request, according to a Reuters report:

“Secretary (Patrick) Shanahan directed his chief of staff to speak with the White House military office and reaffirm his mandate that the Department of Defense will not be politicized,” Lieutenant Colonel Joe Buccino, a Pentagon spokesman, said in a statement.

“The chief of staff reported that he did reinforce this message,” Buccino said.

Emphasizing the same sentiment on Sunday, Shanahan told reporters traveling with him to Seoul, “There is no room for politicizing the military.”

The Navy confirmed on Saturday that a “request was made” to “minimize the visibility” of the USS John S. McCain, which was stationed at the Yokosuka Naval Base near the USS Wasp, where Trump gave a speech on Memorial Day. It said the plan was not implemented after senior Navy officials found out about it. The Wall Street Journal first reported the emails requesting the move earlier this week. Shanahan said the Pentagon’s chief of staff had not been informed in advance of the request, and that his staff had not received any emails about it. Trump also said Wednesday that he had no prior knowledge of the plan.

The warship incident has renewed concerns about the administration’s tendency to politicize the military—as Reuters points out, Trump has in the past made overtly political speeches to military audiences and pulled soldiers into a mission on the Mexico border.

But on Sunday, White House Chief of Staff Mick Mulvaney downplayed it all, saying the request to remove the warship was not “unreasonable.”

“The fact some 23- or 24-year-old person went to that site and said, ‘Oh my goodness, there’s the John McCain, we all know how the president feels about the former senator, that’s not the best backdrop, can somebody look into moving it?’” Mulvaney said on Meet the Press. “That’s not an unreasonable thing to ask.” He added that it was “silly” to presume anyone would lose their job over the incident, and said Trump’s feelings toward McCain are “well known.”

WATCH: Acting White House Chief of Staff Mick Mulvaney tells Chuck Todd that moving a Navy ship out of sight from the president was "not an unreasonable thing to do." #MTP #IfItsSunday

Mulvaney: "The president's feelings towards the former senator are well known." pic.twitter.com/kohFeQflaU

Trump and McCain were at odds repeatedly before the late senator’s death last year, and Trump has continued to criticize him since then. In an interview with Fox Business Network in March, Trump called McCain “horrible” for opposing Republican efforts to repeal Obamacare, and accused him of giving a dossier of allegations related to Trump’s Russia ties to the FBI for “very evil purposes.” “I was never a fan of John McCain, and I never will be,” he said days before that.