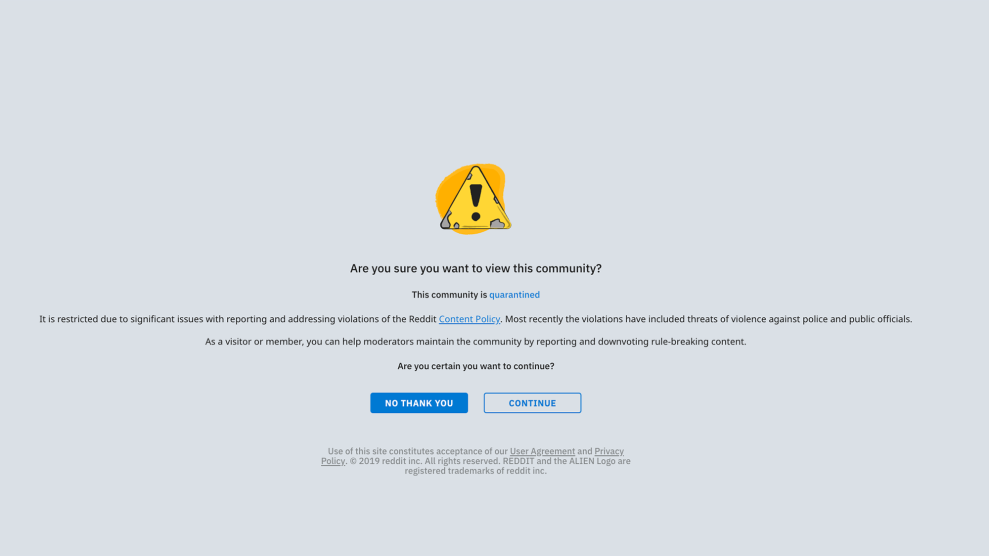 This is the message users see when they visit the r/The_Donald subreddit.Reddit screenshot

Reddit on Wednesday took steps to limit the reach of its infamous r/The_Donald subreddit, a far-right hub for many of President Donald Trump’s most extreme and hateful supporters.

The social media platform “quarantined” the forum for making “threats of violence against police and public officials,” according to a banner on the r/The_Donald page that users now have to click through before entering the subreddit.

Reddit reduces the digital reach of quarantined communities by notifying users that a page they’re about to view is quarantined for violating its rules and requiring them to opt in to see its content. It also limits the ability to cross-post content from it to other subreddits and keeps it from showing up on other parts of the site, including its search suggestions and its aggregated “popular” page.

The spokesperson continued, “As we have shared, we are sensitive to what could be considered political speech, however, recent behaviors including threats against the police and public figures is content that is prohibited by our violence policy. As a result, we have actioned individual users and quarantined the subreddit.”

Reddit did not specify what threats on the subreddit motivated its action, but over the past several days, users on the subreddit have called for violence in support of Oregon Republicans. Militia groups in Oregon have said they’re mobilizing in support of Republican state senators to thwart police from arresting them as they try to hide to avoid a vote on climate change legislation. As documented by Media Matters, r/The_Donald members have called for violence in support of the militia groups.

Reddit did not respond to a question about why it took action on r/The_Donald only now. The subreddit has gained a reputation as one of the most toxic high-profile communities on Reddit, with frequent racist and sexist content. In the wake of the Christchurch, New Zealand, mosque shooting, for example, users justified the shooting and wrote hateful messages about Islam.

In the past, Reddit CEO Steve Huffman has defended the company’s decision to allow r/The_Donald to remain active, saying that Trump supporters deserve an online home.