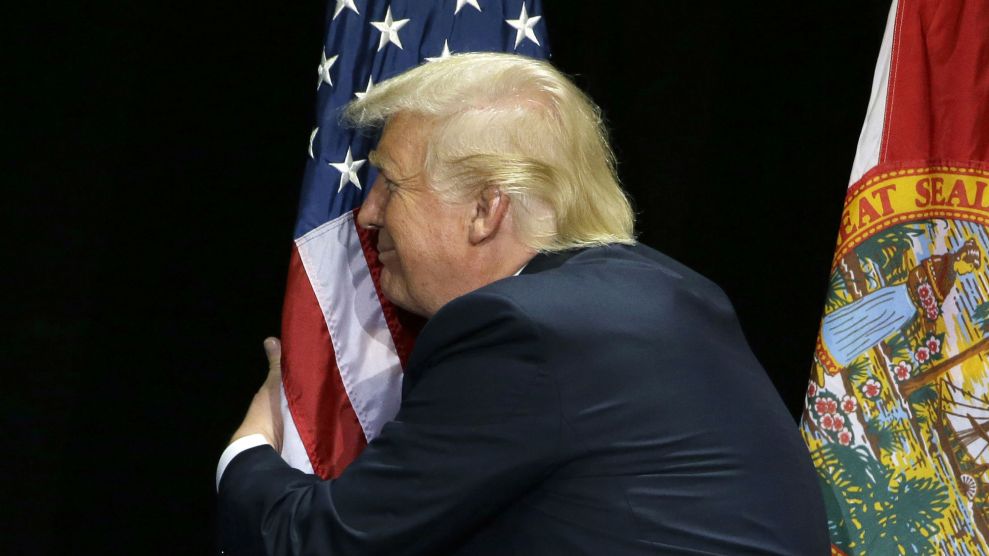 June 14 was Flag Day, a minor holiday that was established by Woodrow Wilson in 1916 to celebrate the day in 1777 that the Continental Congress made the stars and stripes the official American flag. In honor of the event, the White House Twitter account posted this celebratory tweet:

The photo, highlighting the moment President Donald Trump hugged the American flag at the Conservative Political Action Conference in March, triggered a cascade of outrage and hilarity from politicians, commentators, and professional comedians on Comedy Central’s The Daily Show and TBS’ Full Frontal, some describing the tweet as “weird” and “not what Betsy Ross intended.”

We, too, celebrated #FlagDay with a ceremonial flag hugging here at the Trump Presidential Twitter Library in D.C.! #DailyShowLibrary pic.twitter.com/VozSak8tGy

This is not what Betsy Ross intended #FlagDay2019 https://t.co/Vlk32WUke1

In which the official @WhiteHouse Twitter account celebrates #FlagDay by tweeting a picture of Trump giving a flag a #MeToo moment. https://t.co/jTk3mfxrOD

Michael Cohen just wrote that flag a check for $130K.

The almost universally critical responses apparently didn’t deter the president from invoking Flag Day again on Saturday, when he tweeted support for a proposed bill from Sen. Steve Daines’ (R-Mont.)—who introduced similar legislation in in 2017 and 2018—  that would prevent the “physical desecration” of the American flag. This is a cherished issue for Trump, who has called for punishment for burning the American symbol. Shortly after the 2016 election, he tweeted, “Nobody should be allowed to burn the American flag – if they do, there must be consequences – perhaps loss of citizenship or year in jail!”

All in for Senator Steve Daines as he proposes an Amendment for a strong BAN on burning our American Flag. A no brainer!

Trump didn’t respond, much less acknowledge, to the avalanche of criticism for having his aggressive embrace of the flag as the official White House acknowledgment of the holiday. But the criticism just kept coming:

This is real real weird.

This isn't some idiotic campaign or RNC account. It's the official White House account. How far toward the Third World we've sunk. https://t.co/8ynyxvxlw5

There's some sort of orange shit stain on the flag.

Yes. The official White House post for Flag Day is the Imbecile-in-Chief humping it at CPAC. This really is like living in a Third World dictatorship…except less competent. https://t.co/f9LjLPyfi2

From the official US Flag Code: