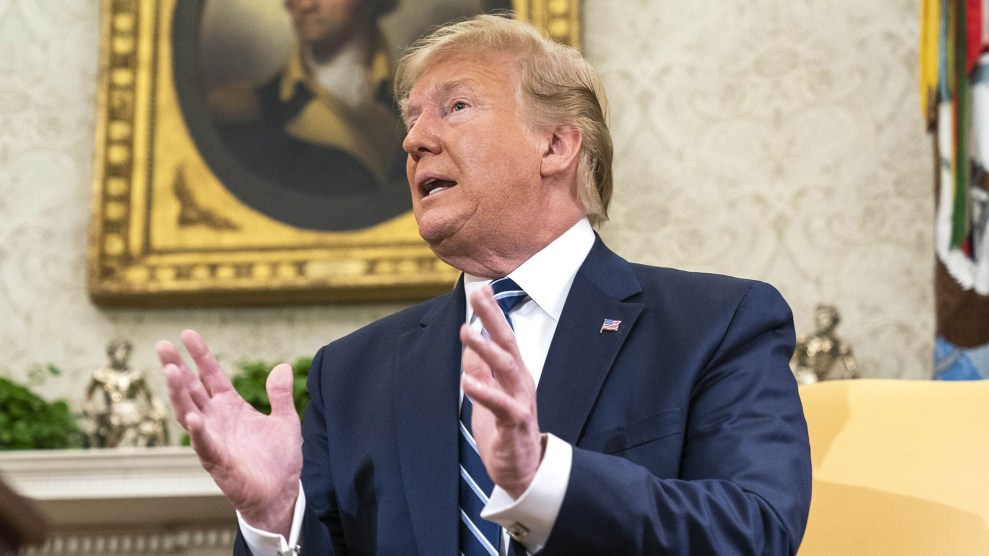 President Donald Trump announced on Saturday that he would delay massive raids on undocumented immigrants that he had ordered on the eve of his reelection campaign kickoff earlier this week.

The president made his pronouncement via Twitter, saying that he had hit the pause button “at the request of Democrats.” House Speaker Nancy Pelosi had released a statement hours before Trump’s tweet asking for a stay.

At the request of Democrats, I have delayed the Illegal Immigration Removal Process (Deportation) for two weeks to see if the Democrats and Republicans can get together and work out a solution to the Asylum and Loophole problems at the Southern Border. If not, Deportations start!

On Monday night—one day before his first reelection rally in Orlando, Florida.—the president tweeted that Immigrations and Customs Enforcement would begin deporting “millions” of undocumented immigrants from the United States. The numbers didn’t quite scale as Trump suggested: Raids had been scheduled to remove 2,000 people who had received court-ordered removals in 10 cities on Sunday. The plans, however, had hung in limbo as acting Department of Homeland Security Secretary head Kevin McAleenan hesitated on the details, according to CNN.

Trump’s Twitter feed from earlier in the day showed no signs that his reversal was on the horizon. Just hours earlier, he appeared to affirm that the plan was still on:

The people that Ice will apprehend have already been ordered to be deported. This means that they have run from the law and run from the courts. These are people that are supposed to go back to their home country. They broke the law by coming into the country, & now by staying.

When people come into our Country illegally, they will be DEPORTED!

He had also expounded on the plans to reporters earlier that day, noting that ICE was “a group of very, very good law enforcement people going by the law, going by the rules, going by our court system, and taking people out of our country who came into our country illegally.”