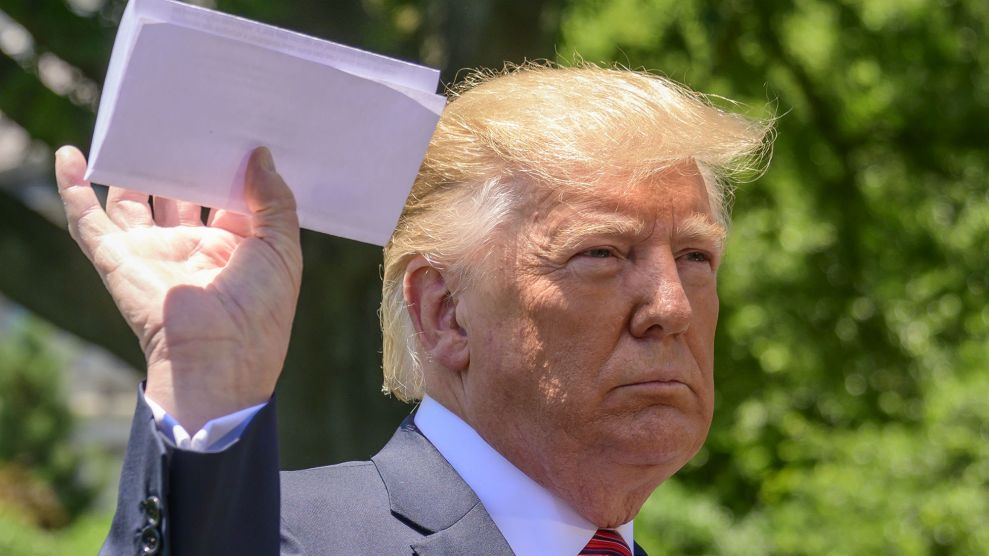 Earlier this month, after his trip to Europe, President Donald Trump announced he had cut an immigration deal, including secret provisions, with Mexico that would stop, for now, his proposed and widely-criticized tariffs.

I am pleased to inform you that The United States of America has reached a signed agreement with Mexico. The Tariffs scheduled to be implemented by the U.S. on Monday, against Mexico, are hereby indefinitely suspended. Mexico, in turn, has agreed to take strong measures to….

The president did not disclose those details, but did flash what he said was the agreement at reporters, and promised to reveal its contents in the future. On Friday, the Mexican government released the text. It turns out, the “deal” Trump heralded was a whole lot of nothing. In fact, it is more of an arrangement to continue discussions.

“The United States and Mexico,” the agreement reads, “will immediately begin discussions to establish definitive terms for a binding bilateral agreement to further address burden-sharing and the assignment of responsibility for processing refugee claims of migrants.”

Politico described the back and forth as a classic example of how Trump creates a crisis, exacerbates the crisis, “[a]nd finally, cut a vague, imperfect or constitutionally questionable deal at the last minute, claiming victory and savaging the critics.”

The document, shared on Twitter via Bloomberg’s Mexico bureau chief Carlos Manuel Rodríguez, indicates that a future agreement between Mexico and the United States would be part of a “regional approach to burden-sharing” in processing migrant claims. Mexico also commits to “immediately begin examining” its laws and regulations to identify “any changes that may be necessary” to accommodate a future agreement.

As Rachel Withers at Vox explains:

“The release of the letter doesn’t reveal any new commitments from Mexico, and more or less lines up with the joint statement released on June 7. In the declaration, Mexico agreed to take ‘unprecedented steps to increase enforcement to curb irregular migration,’ including deploying its National Guard throughout the country and giving priority to its southern border. It also declared that ‘those crossing the US Southern Border to seek asylum will be rapidly returned to Mexico where they may await the adjudication of their asylum claims.’

The agreement doesn’t mention anything about not imposing the tariff on Mexican goods that Trump was threatening, and is, at most, an agreement to have discussions about a potential future deal.”

Well, Mexico just released the full page that @realDonaldTrump carried when he said there was a secret agreement pic.twitter.com/A5ocd4WV6p