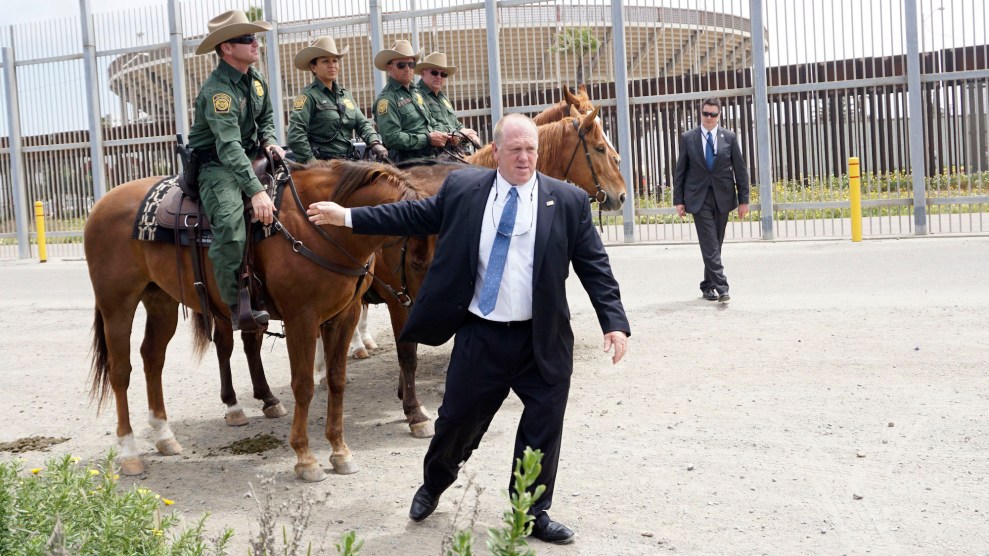 Thomas Homan, at the time the acting ICE director, at the California-Mexico border in May 2018 after a press conference where then Attorney General Jeff Sessions highlighted the administration's new family separation policy.Sandy Huffaker/Getty

On Friday morning, while celebrating his birthday by calling into Fox & Friends, President Donald Trump began rattling off the “fantastic people” enforcing his immigration agenda. One name caught the show’s hosts off guard. Trump unexpectedly announced that Thomas Homan, the former head of Immigration and Customs Enforcement, was returning to his administration.

“What is he doing?” Fox News’ Brian Kilmeade asked. “What is Tom Homan doing?” After initially ignoring the questions and leaving Kilmeade dumbfounded, Trump finally got around to saying that Homan will be his new White House “border czar,” a vague but likely influential role that doesn’t currently exist.

The real surprise is that it took Trump this long to bring Homan back. Since retiring as ICE’s acting director last June, Homan has used his new incarnation as a Fox contributor to ceaselessly praise Trump and attack Democrats. The appearances have furthered Homan’s shift from a loyal bureaucrat under Barack Obama to Trump’s immigration id. After winning the government’s highest award for civil servants under Obama, Homan has become a knee-jerk Trumpian whom many of his former colleagues struggle to recognize. Trump’s announcement on Friday completes Homan’s transformation.

Homan will now have more access to the president than ever, as Trump contemplates ever harsher ways to make a dent in the record numbers of families crossing the border. In a number of recent TV hits, Homan has made clear what one of those policies should be: massive ICE operations to arrest families who received deportation orders but did not comply with them. Such a plan has existed for months, Homan recently said. ICE just needs to go out and make it happen—negative press be damned.

Unlike ousted Homeland Security Secretary Kirstjen Nielsen or her acting replacement Kevin McAleenan, Homan, a ruddy-faced barrel of a man, will never be accused of being overly polished. And that is just how Trump likes it. Standing before a wall of police officers at a 2017 speech, Trump mused that someone who saw Homan on television thought he looked “very nasty” and “very mean.”

“I said, ‘That’s what I’m looking for,’” Trump recalled. “’That’s exactly what I was looking for.’” As Mother Jones wrote in a profile last year, Homan, who began his career as a Border Patrol agent in 1984, lived up to that image as ICE’s acting director:

He has appeared on Fox News to say that politicians who limit cooperation with ICE should be charged with crimes and has staged retaliatory operations against their cities in the meantime. ICE arrests were up 41 percent last year and 171 percent among people without criminal records. ICE is now pursuing even the most sympathetic undocumented immigrants. That is part of Homan’s goal. Testifying before Congress last year, he warned, “If you’re in this country illegally…you should be uncomfortable. You should look over your shoulder, and you need to be worried.”

It was a striking change in tone for a man who was well liked by the immigrant advocates who joined the Obama administration. Cecilia Muñoz, who ran the White House Domestic Policy Council and worked closely with Homan, told me last year, “I find the Tom Homan that I see on TV now unrecognizable compared to the one that I saw in the Situation Room.” But others were less surprised. A former DHS colleague explained, “Tom doesn’t do nuance. Tom is brute force.”

Homan is returning to a dramatically different situation at the border. When Homan announced he was leaving government, roughly 10,000 parents and children traveling together were crossing the border each month. Last month, more than 80,000 did—a number that would have been all but unimaginable just a year ago. Homan places essentially all the blame on Democrats who have refused to pass a law that would allow the Trump administration to deter families by detaining them indefinitely. (The Obama administration enacted that very policy, only to have it blocked by a judge in 2015, in a ruling that requires families to be released after about 20 days.)

When Trump first picked Homan to lead ICE on a permanent basis in November 2017, his nomination went nowhere. The Senate didn’t even get the paperwork. It was unclear why. Trump obviously liked him, and Homan was already doing his part on Fox News. Homan announced last April that he was retiring while his nomination was still pending.

As border numbers have surged in recent months, Homan’s encomiums to Trump have reached new heights. Earlier this week, on the Fox Business Network show hosted by informal Trump adviser Lou Dobbs, Homan was sycophantic even by his standards. “Look,” Homan said with a smile, “President Trump is just a great president.” There were so many obstacles—Democrats, a meddling appeals court in California—yet Trump had accomplished more on the border in two years than any of the five other presidents he served, Homan said at a time when border crossings are the highest level in more than a dozen years.

“He’s a great president. He’s keeping his word,” Homan continued, jabbing his fingers at the camera with enthusiasm. “He’s defending America. I’m proud that he’s my president.” Three days later, Trump couldn’t contain his excitement and announced that Homan will soon be reporting directly to him.