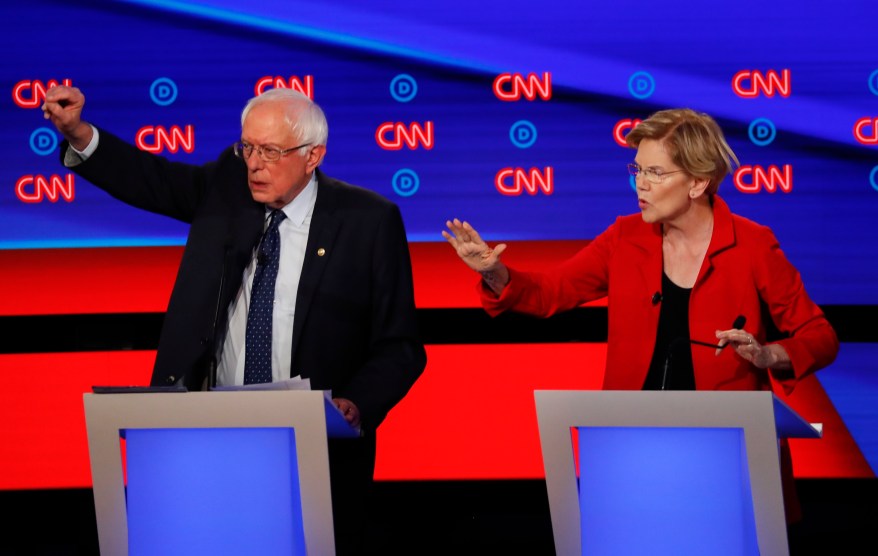 By the 80th minute of Tuesday’s Democratic presidential debate in Detroit, Elizabeth Warren had finally had enough.

“I don’t understand,” she said, “why someone would go through all the trouble of running for president of the United States just to tell us what we can’t do and what you won’t fight for.”

I genuinely do not understand why anyone would go to all the trouble of running for president just to get up on this stage and talk about what’s not possible. #DemDebate pic.twitter.com/cOCz5TS3AF

The target, in that moment, was former Maryland Rep. John Delaney, who for the third time in an hour had just dismissed the Massachusetts senator’s platform as “impossible.” But Warren was responding to a lot more than Delaney.

Heading into the night, there was speculation in certain circles that the second round of Democratic debates (10 more candidates will take the stage Wednesday) would be a showdown between the two progressive stalwarts in the field, Warren and Vermont Sen. Bernie Sanders. Perhaps the two candidates, whose views on health care and the American economic system overlap in so many ways, might seize an opportunity to distinguish themselves from each other.

Instead, the two longtime allies—and the best-polling candidates on the stage—found themselves responding to attack after attack from more moderate candidates anxious to kickstart their own campaigns. Those candidates were egged on in the matter by CNN’s moderators, who, faced with a lineup that included five candidates polling at zero percent, concluded that the easiest way to make people like Delaney relevant was to ask them about someone else.

It started in the opening statements. Americans “can’t wait for a revolution,” said Montana Gov. Steve Bullock, who had failed to qualify for the first debate. Delaney invoked the ghosts of George McGovern and Michael Dukakis, and warned that “impossible promises” of “free anything” would doom the party to irrelevance. Former Colorado Gov. John Hickenlooper stated (falsely) that not a single Democrat who flipped a Republican seat in Congress last fall supported the policies of Warren and Sanders.

Most of the criticism of Sanders and Warren from that point forward focused on their health care plans, which they acknowledge would replace the private health-insurance market with a government-run system. Sanders, with the first question of the night, was asked to respond to criticism from Delaney that Medicare for All was “political suicide.”

A few minutes later, Warren jumped to his defense with a line you should expect to hear more and more of.  “We are the Democrats, we are not about trying to take away health care from anyone,” she said. The idea that Medicare for All would force people off their health care was, she continued, “Republican talking points.”

Over the next 15 minutes, CNN moderators invited other candidates to weigh in. Moderator Jake Tapper tried to pin Warren down on whether her bill would raise taxes on middle-class families. (She’s a good enough debater to know when to dodge.) Other candidates, such as Minnesota Sen. Amy Klobuchar, criticized the Big Two for trying to do too much. A public option bill, she countered, “is the easiest way to move forward quickly.” If you were only just tuning in, you might have thought that Warren or Sanders, and not former Vice President Joe Biden, was the candidate leading the field by double digits.

But the Big Two relished the opportunity to defend their plans in front of a national audience against a cadre of opponents whose relative anonymity and earnest arguments for moderation made them useful foils for populist one-liners. When Ohio Rep. Tim Ryan—a longtime backer of a House bill that would eliminate private health insurance—complained that union members who like their insurance would have to give it up under the Sanders plan, the Vermont senator explained that his bill would offer things like dental care and vision that many plans don’t cover.

Choppy though it may have been, the debate—and in particular its back-and-forth over Medicare for All—was a test run for the big argument that Democrats cannot escape anymore: the question of whether the party should head into next fall’s election promising to transform the nation’s economic structures, or patch up the ones it’s got. It’s the argument that Warren and Sanders, in their own different ways, have been jonesing for, the one that the party has been building toward over the past two years. It’s just a little weird that they had to have it with John Delaney.