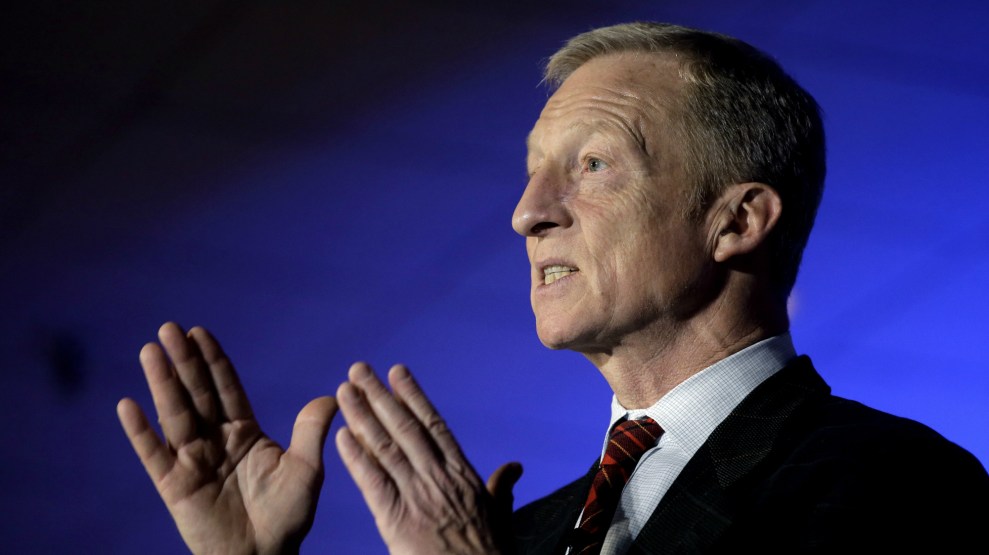 Billionaire activist Tom Steyer announced his candidacy for the 2020 Democratic presidential nomination on Tuesday, promising a populist campaign that harnesses his years of work fighting the fossil fuel industry and advocating for climate action.

Yet his decision to enter the race—after first announcing he wouldn’t—has garnered more skepticism than excitement. Even as the climate crisis is expected to play a major role in the presidential contest for arguably the first time, climate activists questioned the theory of his candidacy.

“I really don’t get it, man,” said a top climate policy researcher in California who requested anonymity because Steyer “has a lot of money” that is used to support climate work around the country.

In 2013, Steyer founded NextGen America as an environmental advocacy group and political action committee, though the organization broadened its scope in recent years to focus on turning out young voters for progressive causes. The 62-year-old donates generously to Democratic candidates. He poured millions into a high-profile campaign to impeach President Donald Trump.

The Steyer campaign did not respond to an interview request Thursday.

“I wish he weren’t doing it,” said a prominent activist, who also asked for anonymity for fear of souring a relationship with one of the movement’s top funders. “There was always that question in the back of everybody’s minds of whether he’s driven by ego and whether he’s all out for him, or whether he’s trying to build a movement. This answers the question clearly.”

Bill McKibben, the writer and 350.org founder who wooed Steyer to the climate movement nearly a decade ago, didn’t respond to emails and Twitter messages requesting comment. Other 350.org officials declined to comment on Steyer’s candidacy. So did Democratic strategist Henry Waxman, the former California congressman who led the charge on the last major climate bill.

“It’s hard to make the case for a billionaire running for president in this day and age,” said Julian Brave NoiseCat, the Green New Deal strategist at the left-leaning think tank Data for Progress (and a past HuffPost contributor). “Especially this late in the game, and especially when we were all under the impression he was not running.”

Steyer said during a January trip to Iowa that he wouldn’t run for president, instead maintaining his focus on his impeachment effort. In private, he feted Warren’s rhetoric on economic inequality and was excited about Inslee’s climate-centered campaign. But, according to The Atlantic, Steyer grew frustrated with Inslee’s failure to take off as the governor’s polling stayed stuck at 1 percent.

It’s a sentiment activists echoed, with some expressing disappointment that Inslee didn’t seize the first round of televised primary debates with the sort of righteous clarion call on climate that Sen. Kamala Harris (D-Calif.) issued on race during her star appearance the second night.

“Steyer has a better chance at becoming president than Inslee,” said Taren Stinebrickner-Kauffman, founder of the climate advocacy group SumOfUs.

“I love Warren,” she added. “Her heart and head are in the right place on climate policy. But I fear that she won’t prioritize it in her first term, and that is a disaster for the country and the world.”

At a moment when carbon dioxide in the atmosphere is at levels unseen in 800,000 years, metropolises of 8 million people are running out of water and flooding is set to break new records in the United States, it’s impossible to have too many climate candidates, activists said.

“Steyer’s entry into the presidential race is likely to lead to more discussion of climate change in the presidential election,” said Michael Mann, a climate scientist at Penn State University. “That can’t be a bad thing.”

“The more attention put on this the better,” said Stephen O’Hanlon, spokesman for Sunrise Movement, the youth-led group that propelled the Green New Deal into mainstream politics with its protests last year.

Still, some wondered whether the money would be better spent on other races. R.L. Miller, president of the political action committee Climate Hawks Vote, said the “single best thing” Steyer could do is devote himself to working to flip the Senate, which she called a “steeper and narrower” path for Democrats than retaking the White House.

“He’s trying to set himself up as an outsider, which is true in that he’s never held elected office, but he’s been very much in the center of Democratic Party politics for a long time,” Miller said. That, she said, is a space he could own by trying to replace climate-denying senators with Democrats who will vote for Green New Deal-style policies. “I’d call him an unelected insider.”