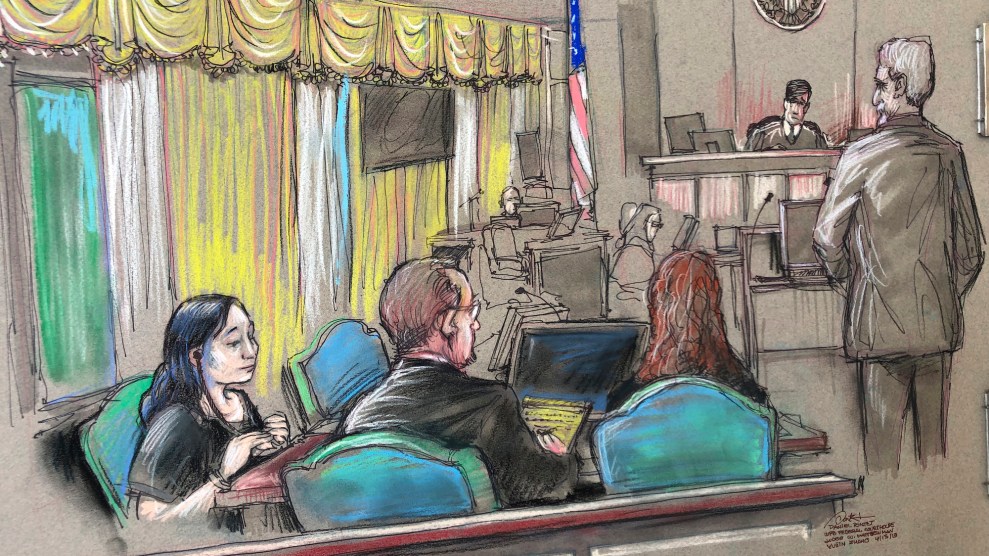 Yujing Zhang at a court hearing on April 15, 2019.Daniel Pontet/AP

Since Donald Trump was sworn in as president, his frequent visits to Mar-a-Lago, his private Palm Beach club, have raised counterintelligence concerns: Were foreign spies targeting the facility to gain access to Trump, his family, or his associates? On Wednesday, a federal judge in Florida suggested there was indeed reason to worry.

Overseeing the case of a Yujing Zhang, a Chinese woman arrested at the club in March for trespassing and lying to a federal agent (and who was found to have an array of electronic devices in her possession), US District Court Judge Roy Altman issued an extraordinary order that federal prosecutors can submit to him classified evidence about Zhang without sharing it with her. He said this was because disclosure of this material “could cause serious damage to the national security of the United States.” In other words, this case—according to the prosecutors—was not a simple trespassing case; it somehow involved secret information.

The ruling enables prosecutors to invoke a provision in a 1980 law, the Classified Information Procedures Act, that allows them to deny a defendant certain evidence to preserve secrecy. Altman’s order says that “none of the classified information is exculpatory” for Zhang. The judge previously granted Zhang’s request to fire her court-appointed lawyers and represent herself in the case, while calling it a “very bad decision.”

Neither Altman nor prosecutors have said more about the classified evidence. Zhang, who has pleaded not guilty, has denied she engaged in espionage, and she is not charged with being a spy. But the order suggests that federal officials could well be investigating whether Zhang is connected to Chinese intelligence.

“Clearly this is different than an ordinary trespassing case, and one can only infer that it is related to Zhang’s nationality, and any related intelligence or surveillance that might be connected with her or with China,” said Steven Aftergood, who directs the the FAS Project on Government Secrecy and who has written about the 1980 law.

Citing sources familiar with the case, the Miami Herald reports that investigators are “looking into [Zhang’s] suspected intelligence activities in the United States and around the world on behalf of the Chinese government” as part of a broader probe into Chinese “spying in South Florida and local business people suspected of acting as assets and intelligence-gatherers for the Chinese government.” That probe, the Herald has reported, has also focused on Cindy Yang, a former massage parlor owner who launched a business offering Chinese travelers access to Mar-a-Lago, Trump, his family, and other Republican officials.

According to her former lawyers, Zhang, a Chinese citizen, traveled from Shanghai to Palm Beach to attend a previously scheduled March 30 fundraiser at Mar-a-Lago. Yang had promoted the event on a Chinese social media site as an opportunity interact with influential Americans, including Trump’s sister, Elizabeth Trump Grau. Yang billed the event as a “once-in-a-lifetime publicity opportunity” attended by “Chinese elites from various countries.”

Zhang paid a mysterious Chinese businessman named Charles Lee $20,000 for a travel package that included a ticket to the event. Lee, who has ties to the Chinese government, had repackaged a ticket acquired from Yang. But when Zhang arrived at Mar-a-Lago on March 30, the fundraiser had been canceled—apparently a result of media coverage of Yang that included reports by Mother Jones. Zhang, displaying two Chinese passports, talked her way into the club, falsely claiming she planned to use the pool, according to a Secret Service agent. She was later detained at a reception area in the club and found to be carrying carrying four cellphones, a laptop, and a thumb drive. Investigators found in her hotel room more electronics, including a device that detects hidden cameras, along with more than $8,000 in cash.

Zhang, who says she has worked for a private equity firm in Shanghai, is scheduled to face trial starting on August 19.