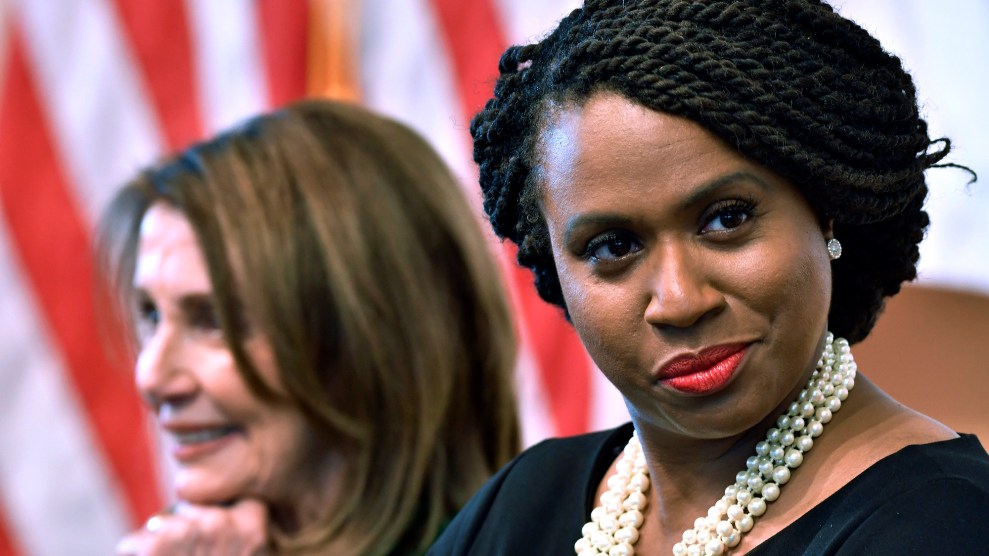 Rep. Ayanna Pressley (D-Mass.) and House Speaker Nancy Pelosi (D-Calif.) during a forum on Friday, May 3, 2019, at Tufts University in Medford, Mass.Josh Reynolds/AP

It’s been a week of escalating tensions between various factions of the House Democratic caucus. After House Speaker Nancy Pelosi dismissed the influence of four of the House’s most liberal lawmakers—Reps. Alexandria Ocasio-Cortez (D-N.Y.), Ilhan Omar (D-Minn.), Ayanna Pressley (D-Mass.)—in an interview with the New York Times, Ocasio-Cortez shot back, accusing Pelosi of “explicitly singling out newly elected women of color.”

“We don’t need any more brown faces that don’t want to be a brown voice,” Pressley said.

Some long-serving black House Democrats fiercely rebuked Ocasio-Cortez’s characterization. Rep. Lacy Clay (D-Mo.), for example, said she had played the “race card.” The exchange threw fresh fuel on a feud between members of the Congressional Black Caucus and the Justice Democrats, the left-wing political organization that helped to recruit and elect the four women last fall. Justice Democrats have recruited Democratic primary opponents to challenge Clay and Rep. Gregory Meeks (D-N.Y.), another CBC member, with the arguments that neither lawmaker has done enough to serve their black and brown constituents.

On Saturday morning, speaking during a keynote panel at the progressive Netroots Nation conference in Philadelphia, some of the women lawmakers of color at the center of the controversy addressed it head-on. Without mentioning the black lawmakers by name, Rep. Ayanna Pressley spoke of the challenges they say they’re facing.

Pressley, like Ocasio-Cortez, defeated a long-serving Democratic incumbent during her primary last summer. Though Pressley is black, the CBC threw its weight behind Michael Capuano, who is white, in the majority-minority district Pressley sought to represent.

Rep. Omar, who shared the stage with Pressley, addressed the remarks from Speaker Pelosi that first ignited the week’s tensions. She drew a distinction between her own political mandate, which is to faithfully represent her constituents in Minnesota, and Pelosi’s, which is to create cohesion across House Democrats.

Pelosi’s comment to the Times, which ignited the controversy, had been in response to the four women lawmakers’ fury over the House’s decision to pass a Senate’s version of a border budget bill that did not contain sufficient protections for migrant children. Ocasio-Cortez, Tlaib, Omar, and Pressley were the only four lawmakers to not vote for a House version of the bill that did contain those provisions because they did not support the providing any funding for that could be used to detain migrant children or conduct deportations.*

But she said that Pelosi’s scorn wouldn’t deter her and her allies from working on the causes they believe in. She ended her remarks with a call to action, noting that their ideas can only be implemented when there are more progressives who share their values are elected to Congress. “That will only come when we have you guys running for office with a platform that says, ‘This is going to be a country of the people for the people that is governed with justice in mind,'” she said.

*This story originally stated that Ocasio-Cortez, Omar, Pressley, and Tlaib were the only four Democrats to not vote for the Senate version of the border budget bill. Roughly 90 Democratic lawmakers voted against the Senate bill.