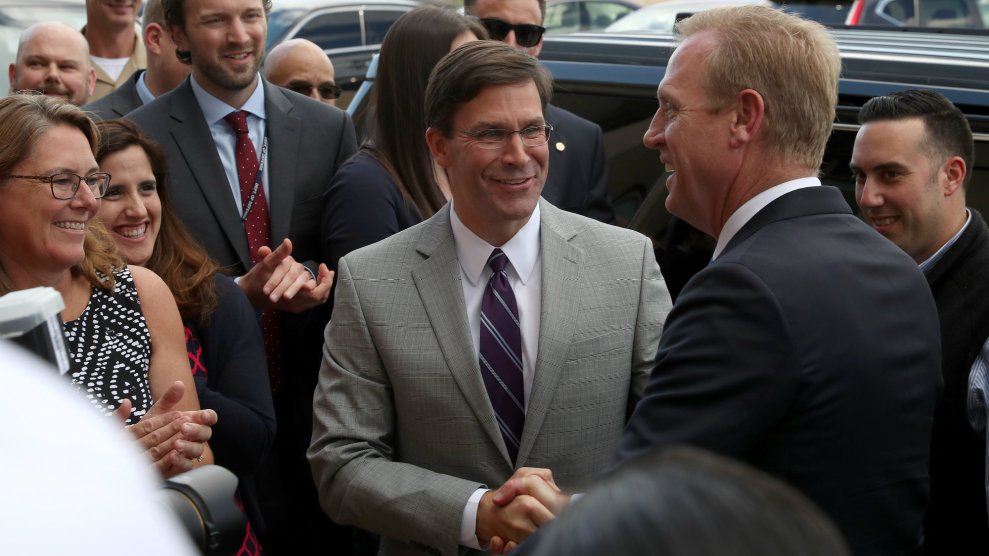 When retired Marine Corps Gen. James Mattis stepped down as secretary of defense in December, he promised to “ensure stability within the Department” by remaining in his post until the end of February, he wrote in a letter announcing his resignation—”a date that should allow sufficient time for a successor to be nominated and confirmed.”

Temporary officials like Spencer now occupy the most crucial roles at the Pentagon, including the top three positions: secretary of defense, deputy secretary of defense, and chief management officer. Twelve senior roles within the secretary’s office are vacant in total, a Pentagon spokesperson confirmed to Mother Jones. But the staffing problem is not isolated to the Defense Department’s central division. The Army and Air Force lack permanent civilian leaders. Trump’s choice to be chief of naval operations withdrew his nomination last week, creating another vacancy for the White House to fill. Even the Pentagon’s Office of the Inspector General, which keeps the rest of the department accountable through reports on waste, fraud, and abuse, has an acting head.

The wave of vacancies has left the Pentagon without relevant policy advisers or Senate-confirmed leaders during a time when the White House is responding to a myriad of foreign policy challenges: rising tensions with Iran, an economic crisis in Venezuela, and a possible third summit between Trump and North Korean dictator Kim Jong Un. The officials who remain must reckon with a notoriously impulsive and unpredictable commander in chief, but also John Bolton, who as national security adviser has pursued a hard-line, hawkish agenda and all but abandoned the traditional model of coordinating national security policy among the Pentagon and other federal agencies. Instead, he’s further concentrated power in the White House.

Without confidence that the president will take their advice seriously, these Pentagon officials have grown increasingly pessimistic. “On these most high-risk, intense decision points, DoD has occasionally taken a less engaged or ‘wait and see’ approach to where the president, the policy, and the process has gone down,” says John Gans, former speechwriter to Defense Secretary Ash Carter and author of White House Warriors: How the National Security Council Transformed the American Way of War. “That’s because they don’t necessarily know if their best advice is going to be heard or heeded.”

Contributing to the turmoil is a leadership churn that shows no sign of ending. While the Senate considers Esper’s nomination as permanent defense secretary—the confirmation hearing is Tuesday—he must step down as acting secretary under a condition of the Federal Vacancies Reform Act. He will become Army secretary again while Spencer takes the reins (temporarily) in the defense secretary’s office. NBC News summed up the strange arrangement on Monday in a headline: “Eight days, two top jobs, four people.”

“This is a particularly complex case,” Rebecca Jones, policy counsel at the nonpartisan Project on Government Oversight, said in an interview with Mother Jones. “I don’t think the Vacancies Act has been challenged with this level of complexity.”

The second rung of acting officials creates even knottier succession problems. David Norquist, the Pentagon’s comptroller, serves in a temporary capacity as the department’s No. 2 official. When the Senate eventually takes up his nomination to be Esper’s deputy, by law Norquist must assume his old position as comptroller only to be replaced by another interim No. 2. At a rare press briefing last week, Defense officials struggled to explain how the arrangement might work.

“It’s very important for the department for everybody in the world to know we have a plan,” department chief of staff Eric Chewning told reporters. “Only one person will serve as the secretary of defense.”

Such a preponderance of acting officials is not unusual in the Trump era, which has endured a historically high degree of turnover among senior staff. Compared to other executive agencies, the Pentagon actually has one of the best records at confirming political appointees, according to the Washington Post and Partnership for Public Service, which have tracked executive branch nominations. But historically, the military’s civilian leadership has remained immune from turbulence in its top ranks.

“When Mattis was secretary, the leadership in DoD was quite stable,” Mark Cancian, a retired Marine and former Pentagon official, said. “They had filled almost all of their positions and most of the people had been there for a while.” Under his leadership, the department unveiled a new National Defense Strategy and introduced measures to reform the Pentagon’s unwieldy bureaucracy.

Once Mattis quit after objecting to Trump’s decision to withdraw US troops from Syria, staffers loyal to him left the Pentagon in significant numbers. Heather Wilson, the Air Force secretary and one of few women in senior positions at the Pentagon, resigned to become president of the University of Texas at El Paso. She reportedly clashed with Mattis’ acting successor, Patrick Shanahan, and his ties to defense contracting giant Boeing. Then it was Shanahan’s turn last month after reports surfaced of violent turmoil within his family. Esper was elevated to succeed him, and the game of musical chairs atop the department started all over again.