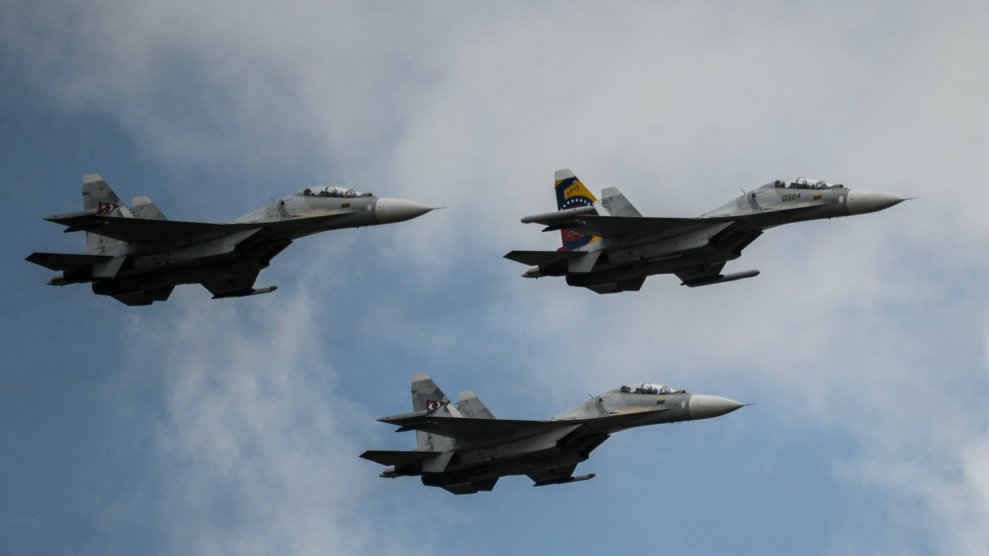 A Venezuelan fighter jet “aggressively shadowed” a US Navy plane “at an unsafe distance” on Friday according to a new Pentagon statement, sparking concerns of a military confrontation in America’s backyard. The aircraft “was flying a mission in approved international airspace,” the military said on Sunday, describing an incident when a “Russian-made” fighter purportedly approached “in an unprofessional manner.”

The Navy plane’s mission was not immediately clear. The United States and its allies regularly “patrol the Caribbean Sea with ships and aircraft doing counter-drug missions, and have for years,” Military Times reported, but the Pentagon did not specify whether the craft had been part of those routine deployments, or if it had instead been monitoring President Nicolas Maduro’s regime in Venezuela.

The Trump administration has spent months calling for Maduro’s ouster and pledged its support in January to Juan Guaidó, whom the US and more than 50 countries recognize as Venezuela’s legitimate leader. Even as Maduro has clung to power amid his country’s economic collapse, Russia has remained a staunch ally—a fact the Pentagon did not fail to mention in its statement on the aerial incident. “This latest action also demonstrates Russia’s irresponsible military support to the illegitimate Maduro regime and adds to Maduro’s growing legacy of reckless and negligent behavior,” the statement, released through the military’s Southern Command headquarters in Florida, read.

On Twitter, Southern Command released a video and four pictures that it said show the Venezuelan jet’s aggressive actions.

The Pentagon’s complaint comes just weeks after Iran, another American adversary, shot down a US drone that the Pentagon said had been flying over international waters. (Iranian officials claim it had breached their airspace.) The attack, which came amid months of rising tensions between the US and Iran, almost provoked an American air strike in response, which President Trump said he stopped it with 10 minutes to spare. On Friday, the US returned the favor by bringing down an Iranian drone near an American warship in the Persian Gulf.

For weeks, Iran has dominated headlines while Venezuela, according to a report last month in the Washington Post, has receded from Trump’s focus as he loses “both patience and interest.” A coup attempt flopped in April and Maduro remains in power. His resilience in the face of international pressure has not yet stopped lawmakers like Sen. Marco Rubio (R-Fla.), one of Maduro’s harshest critics in the US, from predicting his imminent downfall. After the military released images of Friday’s incident, Rubio tweeted, “Venezuela only had 3 fighter jets that can fly. If they ever harmed any U.S. aircraft they would soon have zero.”