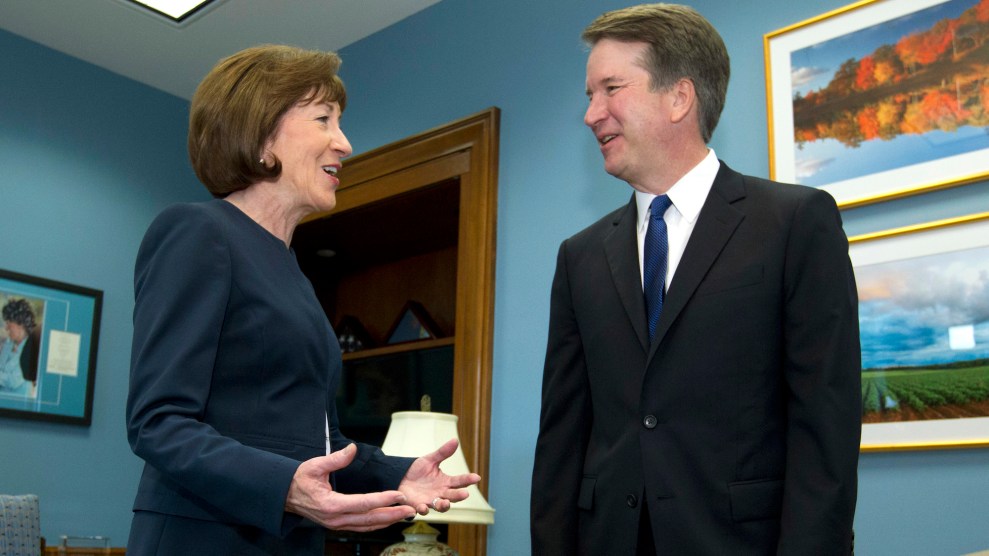 When Sen. Susan Collins, a Maine Republican, ran for reelection in 2014, she had the backing of a wide swath of powerful groups whose agendas are more often associated with Democrats. With control of the Senate up for grabs, the Human Rights Campaign—which advocates for LBGTQ equality—endorsed Collins, as did the national gun control groups Giffords and Everytown for Gun Safety. Environmental groups like the League of Conservation Voters and Environmental Defense Fund Action backed Collins, as well.

The groups that once celebrated Collins as a rare GOP ally are now facing a dilemma.

It’s not unusual for interest groups pushing progressive causes to back a few moderate Republicans each cycle. Supporting GOP candidates beefs up their bipartisan bona fides, and Collins has been a chief beneficiary of that practice during her two decades in office. But this time around, Collins—who is facing a backlash over her vote to confirm Brett Kavanaugh to the Supreme Court—is one of the Democratic Party’s top targets in their fight to take back the Senate. And the groups that once celebrated her as a rare GOP ally are now facing a dilemma.

Collins had long been seen as one of the few GOP lawmakers willing to buck her party on pivotal votes. She was one of only four Senate Republicans to vote in favor of a proposal to expand background checks for gun purchases in the wake of the 2012 Sandy Hook massacre. She became one of the first Republicans in Congress to support same sex marriage and was one of the few to vote to repeal the ban on gay and lesbian troops serving openly in the military. She has pushed back against Senate Majority Leader Mitch McConnell’s (R-Ky.) efforts to undo Obama-era climate change rules and has a long record of opposing GOP efforts to prevent the Environmental Protection Agency regulating greenhouse gas emissions.

None of this is to say Collins has been a perfect partner—even the organizations that endorsed her in past cycles took issue with a number of her positions. Prior to the 2014 election, for example, she voiced support for the controversial Keystone XL pipeline. But as Huffpost explained at the time, green groups stayed loyal to her because she had been one of the few members of her party to back climate change legislation. And while these organizations have been accused of grading Collins on a curve, they maintain that her willingness at times to reach across the aisle should be rewarded.

But Collins’ votes in the era of Donald Trump are testing the depth of that loyalty. The president has nominated a bevy of anti-abortion, pro-gun, anti-environment judges, and the GOP-held Senate—usually with Collins’ help—has confirmed them at a rate that outpaces Trump’s predecessors. Kavanaugh’s confirmation crystallized outrage at Collins, and activists raised more than $4 million for whoever wins the Democratic nomination to run against her in 2020.

Reproductive rights groups—stung by Collins’ support for Kavanaugh and Neil Gorsuch, another Trump Supreme Court appointee who activists fear who could help overturn Roe v. Wade—were among the first to turn against the Maine Republican. Collins’ vocal support for abortion rights won her the backing of NARAL Pro-Choice America in 2002, and the group stayed neutral in her 2008 and 2014 races. This time, however, NARAL has already endorsed an early Democratic challenger, Maine House Speaker Sara Gideon. The group’s concerns about Collins go beyond her embrace of Trump’s judicial nominees. Collins, NARAL notes, provides a crucial vote helping Republicans to maintain control of the chamber; if Democrats took back the Senate, they could block anti-abortion judges no matter who was president.

Like NARAL, Planned Parenthood backed Collins in her 2002 reelection campaign and stayed out of her 2014 race. It even asked Collins’ 2014 Democratic challenger, Shenna Bellows, to remove language from her campaign website that implied Collins had voted to defund the group. (Collins had, in fact, voted to protect federal funding for Planned Parenthood when the GOP-held House attempted to defund it in 2011, though she’d also voted for dead-on-arrival appropriations bills that had included the defunding provision.)

In November 2017—even after she’d voted to confirm Gorsuch—Planned Parenthood gave Collins an award for her commitment to abortion rights. But less than a year later, its political arm slammed her vote for Kavanaugh as a direct assault on abortion rights. The group says it definitely won’t endorse Collins in 2020, though it hasn’t yet said whether it will back Gideon or any other Democrat. If it does support Collins’ opponent, it wouldn’t be the first time. In 2008, Planned Parenthood endorsed Democrat Tom Allen for the seat, as retribution for Collins’ vote to confirm yet another anti-abortion Supreme Court justice, Samuel Alito.

Other advocacy groups have yet to decide whether to back Collins again, saying that they are still hashing out their 2020 strategy. But there are early signals that many of Collins’ former allies will find it politically difficult to support her this time around. Collins’ rating on the Human Rights Campaign’s congressional scorecard has taken a beating in recent years, falling from 85 percent during President Barack Obama’s second term to 33 percent in the first half of Trump’s—in part due to votes to confirm Trump’s nominees. And while Collins is a cosponsor of the Equality Act—a bill that guarantees civil rights protections to members of the LBGTQ community—the GOP-held Senate refuses to bring it for a vote. HRC says it hasn’t yet reached any endorsement decisions.

Collins’ League of Conservation Voters rating has similarly tanked in recent years. After endorsing Collins in 2014, the high-profile environmental group gave her a “huge thanks and kudos” for her 2017 vote against Scott Pruitt, Trump’s choice to run the EPA. But Collins’ votes on other Trump nominees have been cause for alarm. “LCV Action Fund has not made an endorsement in this race, but it is obviously extremely disappointing that Senator Collins earned a score of only 21 percent on LCV’s 2018 National Environmental Scorecard, due in large part to her support for many of President Trump’s anti-environmental nominees to both the judiciary and executive branches,” Sara Chieffo, LCV’s Vice President of Government Affairs, said in a statement.

Slower to register their discontent, however, have been the major gun control advocacy organizations that previously backed Collins. Both Giffords and Everytown drew flak in 2018 for endorsing endangered Republicans with spotty records on the issue. Neither group has publicly said that it plans to abandon that strategy in 2020—even though they vocally opposed Kavanaugh’s confirmation because of his past arguments suggesting that assault weapons bans are unconstitutional.

In a statement, Everytown president John Feinblatt said that Collins “has been an advocate in the fight for gun safety,” noting her 2013 background checks vote and her support for so-called “red flag” laws intended to remove guns from people who pose a risk to themselves or others. “We look forward to hearing from all 2020 candidates about their ongoing commitment to gun safety,” Feinblatt wrote. Giffords did not have any comment on the race at this time.

Some of the hesitancy to criticize Collins may stem from ongoing advocacy work. Gun reform advocates hold out hope that the Senate might take up modest gun reform measures, such as a red flag law. In March, Giffords executive director Peter Ambler told reporters that Collins was among a small group of GOP senators who could be persuaded to champion a universal background checks bill that had passed in the Democratic House.

But, Ambler added, “even if we’re not able to pass this bill over the next year and a half, we’ll be able to make it political in 2020 and help elect a president and a Democratic Senate on this issue.”