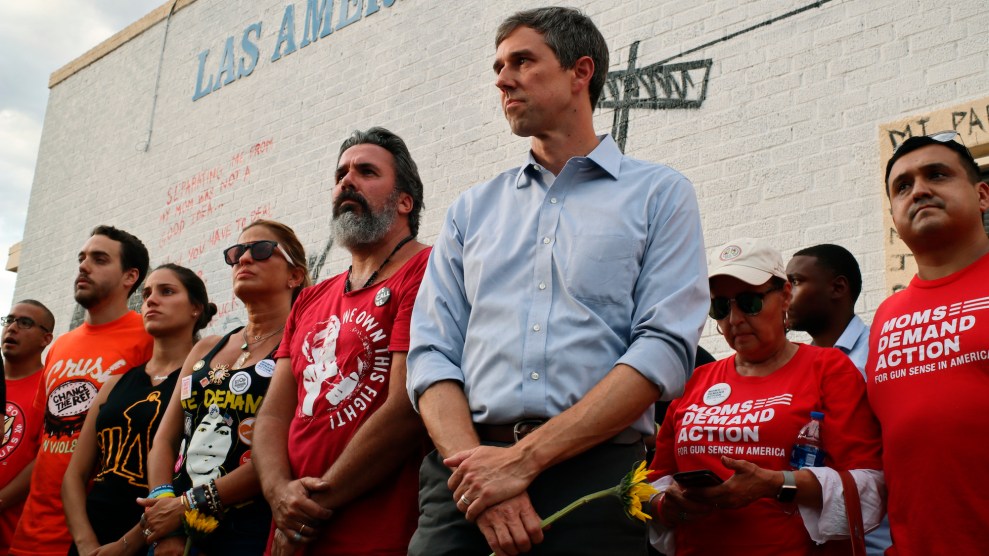 In the aftermath of back-to-back mass shootings in El Paso, Texas, and Dayton, Ohio, earlier this month, House Speaker Nancy Pelosi (D-Calif.) had a simple message for her caucus: Keep the pressure on Senate majority leader Mitch McConnell (R-Ky.) to hold a vote on H.R. 8, the universal background checks bill that her chamber had passed back in March.

That strategy ran counter to what many of her colleagues hoped for. As the weekend’s death toll climbed, eventually reaching 31, a number of House Democrats called for their chamber to break its August recess and return to Capitol Hill to vote on gun reform measures the House had not yet considered. In particular, they were pushing for a ban on assault weapons such as the ones employed not only in the El Paso, Dayton and Gilroy, Calif., tragedies, but in nearly every other high-profile mass shooting in recent memory, including those that took place in Newtown, Connecticut, Sutherland Springs, Texas, and Parkland, Florida. A measure to do so, introduced by Rep. David Cicilline (D-R.I.) in February, has 198 cosponsors, including a number of freshmen Democratic lawmakers who flipped their districts from red to blue during the 2018 midterms.

Members of the House Judiciary Committee will return from recess a few days before the rest of their colleagues to mark up a number of gun measures, including a red flag law and a ban on high-capacity magazines.

“We need to hold McConnell’s feet to the fire,” Rep. Jamie Raskin (D-Md.), a member of the House Judiciary Committee, told me on Friday. “Having said that, we have an obligation in the house to go forward with a public policy platform to reduce the gruesome death toll in America. We have to do the right thing and let the Senate catch up to us.”

Pelosi’s restraint also stood in stark contrast to the demands of the 2020 Democratic presidential hopefuls. A week after the massacres, 16 of them gathered in Iowa to appear at a forum hosted by Everytown for Gun Safety and Moms Demand Action, its partner grassroots advocacy arm, to share their visions for gun reform.

As each of them took the stage, universal background checks and assault weapons bans were the baseline. Sens. Cory Booker (D-N.J.) and Elizabeth Warren mentioned their proposals to establish a federal licensing system for gun owners, a measure researchers say would do more to prevent gun violence than any other. Sen. Kamala Harris, meanwhile, reminded the crowd that she would take executive action to, among other measures, revoke licenses of gun manufacturers who break negligence laws by selling guns to straw purchasers or supply dealers who consistently sell guns used in crimes, if Congress failed to enact meaningful gun legislation within the first 100 days of its session under her presidency.

There are simple political explanations for the split between Pelosi’s conservative approach to gun control and the more aggressive stance of the rest of the party. Candidates and House members are showcasing bold proposals to stand out in a crowded field or secure points for the next round of elections. At the same time, Pelosi has been adamant that when the crucial 2020 elections take place, in every race from the presidency on down, her party will be measured by its efforts to get things done in a bipartisan manner. But none of those political calculations should obscure the overall message to voters over the last few weeks: Democrats are prepared to go a whole lot further in pushing for gun safety measure than they ever have before.

What’s taken so long? The story is a familiar one, but I’ll repeat it here anyway. Back in 1994, House Democrats suffered heavy losses during the midterms, and many blamed a bipartisan crime bill they passed earlier that year—which included a temporary ban on 19 specific military-style assault weapons, as well as magazines that held more than 10 rounds of ammunition. Guns remained a third-rail political issue until the 2012 shooting at Sandy Hook Elementary School killed 26 victims—including 20 first-graders.

In the aftermath of the tragedy, the House and Senate attempted a bipartisan approach to addressing gun violence, with Sens. Joe Manchin (D-W.V.) and Pat Toomey (D-Penn.) crafting a measure that would expand background checks to most gun sales, while Reps. Mike Thompson (D-Calif.) and Peter King (R-N.Y.) pushed for a similar measure in the House. Then-Senate majority leader Harry Reid (D-Nev.) left a number of bold measures, including an assault weapons ban, out of the gun reform package he put to the Senate for a vote. In part because of relentless pressure from the NRA, the Senate measure failed and was subsequently never take up in the House.

Since then, Democrats and their activist allies have rallied around background checks, a measure that both promised to both prevent the most gun-related deaths and showed signs of bipartisan support. Shannon Watts, the founder of Moms Demand Action, told me in March, “We know what will help stop the most deaths the quickest will be a background check law.”

Meanwhile, other countries that have dealt with high-profile, high-death toll massacres have taken a different approach. In the wake of a terrorist attack on two New Zealand mosques that left 50 dead, for example, the country’s parliament and prime minister swiftly enacted a ban an assault weapons and high-capacity magazines. When that news broke, I spoke with gun control activists as to why that wouldn’t happen in America anytime soon.  They blamed the unwillingness of lawmakers to move the issue.

The 2020 Democrats continue to up the ante with ever-bolder gun control proposals.

But the last few weeks of violence seem to have changed that. Members of the House Judiciary Committee, which has jurisdiction over most gun legislation, will return from recess a few days before the rest of their colleagues to mark up a number of gun measures, including a red flag law that would take guns out of the hands of those who pose a risk to themselves or others and a ban on high-capacity magazines. Rep. Cicilline’s assault weapons bill will get a hearing on September 25, alongside a number of other measures to regulate assault weapons.

Meanwhile, the 2020 Democrats continue to up the ante with ever-bolder gun control proposals: On Friday, former Texas congressman Beto O’Rourke, whose hometown is El Paso, released a gun violence prevention plan that goes even further than those that came before. His includes a national gun registry and mandatory buyback of existing assault-style rifles, as well as a proposal to hold social media companies liable for failing to prohibit content that incites violence on their sites.

Realistically, there is no path forward for most of what the House, or even these 2020 candidates, propose—nearly all of them rely on a gun reform-friendly Senate. While McConnell has signaled that he might consider background checks and red flag laws when the Senate returns in September, an outright ban on assault rifles would almost certainly be a non-starter. But every move toward progress here has been a direct result of public outrage over the lack of federal action on these issues; a universal background checks bill, after all, had never passed a chamber of Congress until this past February. Who knows where the nation’s anger and grief will lead next?