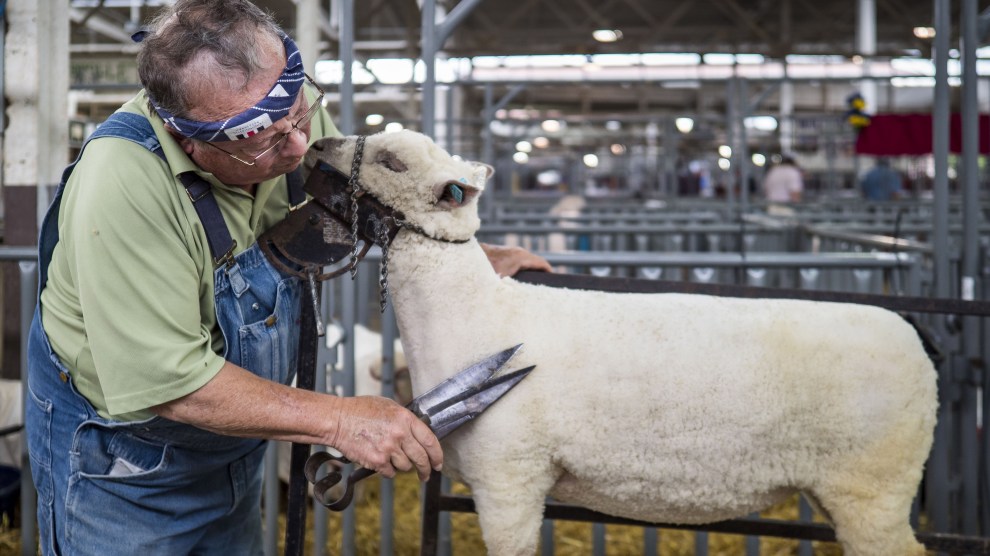 A man trims a sheep before showing it at the Iowa State Fair.Jack Kurtz/Zuma

Beneath a blazing mid-August sun at the Iowa State Fair in Des Moines last week, liberal voters crowded around the Des Moines Register’s political soapbox to hear the Democratic presidential candidates speak. Meanwhile, on the other side of the fairground, farmers in the sheep, cattle and swine barns tended to their animals. A Trump poster hung from a rafter in the sheep barn and a Trump flag flew in front of a row of massive black cows in the cattle barn.

Yet the farmers—who will play a key role in the 2020 presidential race in Iowa—didn’t talk much about politics until I asked them, and even then, some were reticent. Despite escalating tensions with China in a trade war that directly affects United States agriculture, the farmers I spoke to said they were unconcerned that China may cut off US imports and confident that President Donald Trump has their best interests in mind.

Trump won this battleground state with 51 percent of the vote in 2016, and support for him is stronger among rural voters than urban ones. The population in Iowa is almost 36 percent rural, according to the state’s web site, and approximately 63 percent of rural residents voted for Trump in 2016, a CNN exit poll says. Meanwhile, Trump won about 62 percent of the rural vote nationwide, according to a New York Times estimate.

In a state where about one in four people are or have been farmers, approximately 63 percent of rural residents voted for Trump in 2016.

It’s not yet clear which party Iowans will favor in the 2020 election, but a recent Civiqs poll places his approval rating here at 49 percent—slightly higher than the national average of 43 percent. It can be particularly hard to predict farmers’ votes because exit polls often assess rural versus urban voters, but, as the former Democratic governor of Iowa, Tom Vilsack, told the Wall Street Journal, “There are a lot more rural voters who are not farmers, than farmers.”

Still, agriculture plays an important part in Iowa politics, and Democrats campaigning in Iowa have attempted to appeal to farmers by touting ways to revitalize the industry. However, they remain divided on how to approach the trade war, which hit a new extreme when, in early August, China threatened to cut off agricultural imports from the United States. Without Chinese demand for products like pork and soybeans, those crop prices could suffer.

Sitting beneath the Trump sign at his friend’s stall in the sheep barn, Jay Nelson, 48, said that the trade dispute has negatively impacted both the ethanol plant he manages and the central Iowa farm where he grows corn and soybeans and raises sheep. Still, he said, he is confident that China will be forced to negotiate with the US in order to feed its people.

“If they can’t source two staples in their life, which are soy and pork, I think we have a pretty good bargaining chip,” he said. “I think we’ll get some sort of compromise that both parties will end up calling a win.”

Brodrick Schmidt, an 18-year-old farmer who wore a Trump hat, noted that Chinese hogs have been suffering from a disease outbreak, which could make American pork more appealing to them.

“If they want to cut off their trades and exports, then so be it—let their people starve,” he said. “Right now, we’re in a good position to actually break through that and end up on top.”

With the economy booming, Schmidt finds it difficult to fault Trump’s trade decisions. “Prices on corn and soybeans are actually higher than they were under the Obama administration, so honestly, if you want to look president-to-president, I’m not really complaining,” he said.

However, United States Department of Agriculture data show that corn and soybean prices have been trending downward since the Obama years.*

Nelson was also sympathetic to Trump, saying that his 2018 farm bill, which sent $867 billion to farmers to mitigate the effects of the trade war, showed a positive effort from the government to increase value domestically rather than rely on exports. As for the 2020 election, though, Nelson said that he will remain undecided until the Democrats settle on a candidate.

Other farmers said they were less concerned about trade with China than about trade with Canada and Mexico. Emily Saeugling, a 19-year-old animal science major at Iowa State University, said that the United States-Mexico-Canada agreement, Trump’s proposed replacement of the North American Free Trade Agreement, would add $70 to the value of each head of cattle farmers raise.

Saeugling said that demand for certain cuts of beef is higher in Mexico and Canada than it is domestically. “Being able to have a place to export those cuts and having somebody that will pay a premium for them is huge for our industry,” she said.

She, too, is undecided when it comes to 2020, but she said for her, agricultural policy is number one.

“If I see a candidate that is gonna have a lot of policies that are gonna support the industry that I love, then that’s who my vote is gonna go towards,” she said. “As of right now, my mind’s not set.”

Correction: This article has been updated to accurately reflect trends in corn and soybean prices.