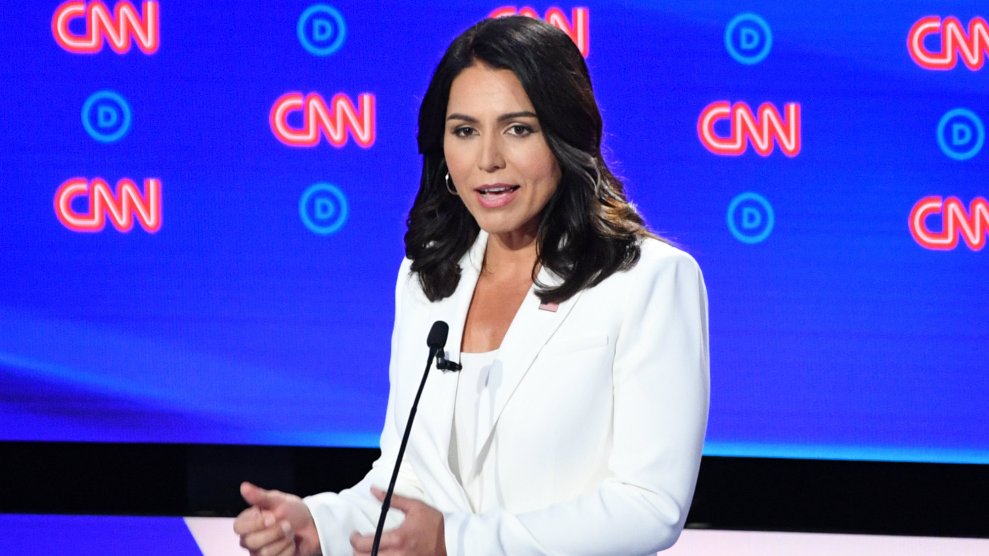 Two Democratic candidates who served in the wars in Afghanistan and Iraq made unambiguous pledges during this week’s debates: They promised to bring home the roughly 14,000 US troops in Afghanistan by the end of their first year in office. Those two veterans—South Bend Mayor Pete Buttigieg and Hawaii Rep. Tulsi Gabbard—are the only Democratic contenders who have made that commitment.

“I thought I was one of the last troops leaving Afghanistan when I thought I was turning out the lights years ago,” Buttigieg said Tuesday as he promised to bring the 18-year-old war to a close. “We’re pretty close to the day when we will wake up to the news of a casualty in Afghanistan who was not born on 9/11.”

Gabbard, who served in Iraq, agreed during Wednesday’s debate. “This is about leadership,” she said, “the leadership I will bring to do the right thing to bring our troops home, within the first year in office, because they shouldn’t have been there this long.”

Since 2001, nearly 2,300 American service members have been killed and 20,000 more injured or captured in Afghanistan. Two US soldiers were killed there this week. The war has cost $756 billion, but as of January, the US-backed Afghan government controlled little more than half the country. Nearly 60 percent of Americans now believe the war was not worth fighting, including a similar proportion of veterans.

Nearly all of the White House contenders have criticized the war, but most have avoided offering specifics for how they would bring it to an end. Sen. Elizabeth Warren (D-Mass.) told MSNBC in January she thinks “it’s right to get our troops out of Afghanistan,” but she has not said how long it would take to do so. Sens. Bernie Sanders (I-Vt.) and Cory Booker (D-NJ) both vowed to pull out “expeditiously” and Sanders, of course, has criticized this war and other interventionist American military engagements for decades. Rep. Tim Ryan (D-Ohio) and former Rep. Beto O’Rourke (D-Texas) cited the end of their first term in office—five-and-a-half years from now—as a deadline.

Will Goodwin, director of government relations at VoteVets, a progressive foreign policy group, praised Buttigieg, the first candidate to commit to a one-year withdrawal deadline, as someone who “understands the reality” deployed troops face “in a way a lot of people in politics don’t.”

“We were really heartened to see him speaking from a position of strength and being firm and being willing to be specific,” said Goodwin, whose group also praised Gabbard for her similar withdrawal promise Wednesday.

For Iraq War veteran @TulsiGabbard, the question of removing troops from Afghanistan is personal.
She says she'll bring the troops home in her first year in office. #EndForeverWars pic.twitter.com/auSlAOl8g4

Other candidates have been vague about the details or, in some instances, hostile to the idea of leaving anytime soon. “If we completely pull our troops out of there, you’re going to see a humanitarian disaster,” former Colorado Gov. John Hickenlooper said at Tuesday’s debate. “We’re going to have to be in Afghanistan.”

Sen. Kamala Harris (D-Calif.) told the New York Times, “I believe we should bring back our troops from Afghanistan, but I also believe that we need to have a presence there in terms of supporting what the leaders of Afghanistan want to do.”

Rep. Seth Moulton (D-Mass.), an Iraq veteran who did not qualify for the first two debates, provided possibly the most passionate rebuttal to the argument for a quick and total withdrawal in a series of tweets on Tuesday night, but he still acknowledged the need to end the war.

Don’t get me wrong: we need to end the war in Afghanistan. But when I do, I will bring our troops home for good.

Afghanistan is an issue that doesn’t fall neatly along party lines. President Donald Trump’s own evolution would fit well within the debate among the Democratic candidates. After calling the war a “terrible mistake” during the 2016 campaign, he was eventually persuaded by his advisers to send more troops to the country once in office. (The exact figure is not known because in late 2017, the Defense Department stopped reporting the number of troops stationed there.) Most recently, Trump ordered Secretary of State Mike Pompeo to reduce American forces in Afghanistan by the 2020 election while US negotiators pursue a deal with the Taliban to end the conflict.

“What concerns us most is people saying our commitment to Afghanistan needs to be open-ended,” Dan Caldwell, former executive director of Concerned Veterans for America, a right-leaning group that supports a quick end to the Afghanistan war, said. “When you start talking about withdrawals that are going to last more than 18 months or 2 years, that’s when things get concerning.”

For his part, Democratic frontrunner Joe Biden still has not specified where he stands on the longest war in American history. On Wednesday, he criticized President Barack Obama’s 2009 surge of 17,000 troops but didn’t clarify how he would manage US forces in the region.

“We should have not, in fact, gone into Afghanistan,” Biden said.

On that issue, there’s increasing agreement. But 18 years later, no such consensus has emerged on how to end it.