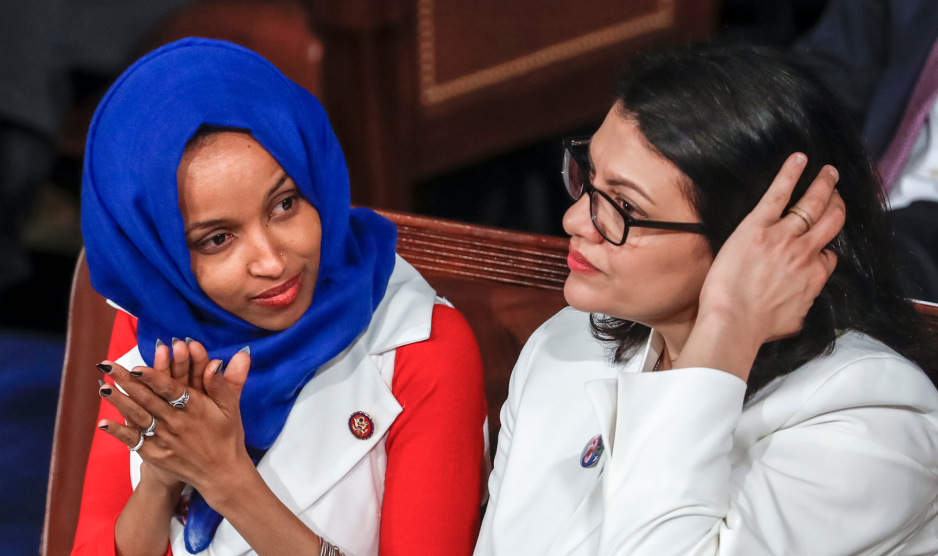 President Donald Trump on Thursday called on the Israeli government to bar Reps. Ilhan Omar (D-Minn.) and Rashida Tlaib (D-Mich.) from entering the country during a planned visit to the West Bank this weekend, claiming in an incendiary tweet that they “hate Israel” and “all Jews.”

Less than an hour later, Israel formally announced that the two Democratic congresswomen—the first and only two Muslim women to be elected to Congress—would not be allowed entry. “We won’t allow those who deny our right to exist in this world to enter Israel,” Israel’s deputy foreign minister said on state radio, a likely reference to Omar and Tlaib’s support for the boycott, divestment, and sanctions movement. “In principle, this is a very justified decision.”

Trump’s efforts to block Omar and Tlaib from entering Israel, and thereby punish his perceived political enemies, comes as the latest in his longstanding attacks against the two congresswomen. Those attacks have frequently included racist diatribes and charges of antisemitism.

The White House had previously denied reports that Trump was pressuring Prime Minister Benjamin Netanyahu for such a move. “The Israeli government can do what they want,” press secretary Stephanie Grisham had said on Saturday. “It’s fake news.”

The president’s tweet on Thursday all but confirmed the behind-the-scenes efforts.

It would show great weakness if Israel allowed Rep. Omar and Rep.Tlaib to visit. They hate Israel & all Jewish people, & there is nothing that can be said or done to change their minds. Minnesota and Michigan will have a hard time putting them back in office. They are a disgrace!

The decision to block Omar and Tlaib is all but certain to exacerbate tensions between Netanyahu and Democrats. “Denying entry to members of the United States Congress is a sign of weakness, not strength,” Senate Minority Leader Chuck Schumer (D-N.Y.) said in a statement. “It will only hurt the U.S.-Israeli relationship and support for Israel in America.”

The announcement was swiftly condemned on social media:

Israel doesn't advance its case as a tolerant democracy or unwavering US ally by barring elected members of Congress from visiting because of their political views. This would be a shameful, unprecedented move. I urge Israel’s government to allow @IlhanMN and @RashidaTlaib entry.

Israel should stand up to President Trump and allow our colleagues to visit. Nobody has to agree with their opinions, but it will inevitably harm U.S.-Israel relations if members of Congress are banned from the country. We must find ways to come together; there’s enough division.

Israel isn’t Bibi, and America isn’t Trump. Support for the America – Israel relationship is not measured by belligerence towards Muslims or extremism towards Israel’s critics. Not allowing Reps Omar and Talib to enter Israel would be a grave mistake. Cooler heads must prevail.

I strongly condemn this decision by the Israeli government, which undermines the ability for our two allied countries to have the frank, open and, at times, difficult discussions that we must have in order to ensure Israel remains a secure and democratic nation. https://t.co/NRTdxW9s4N