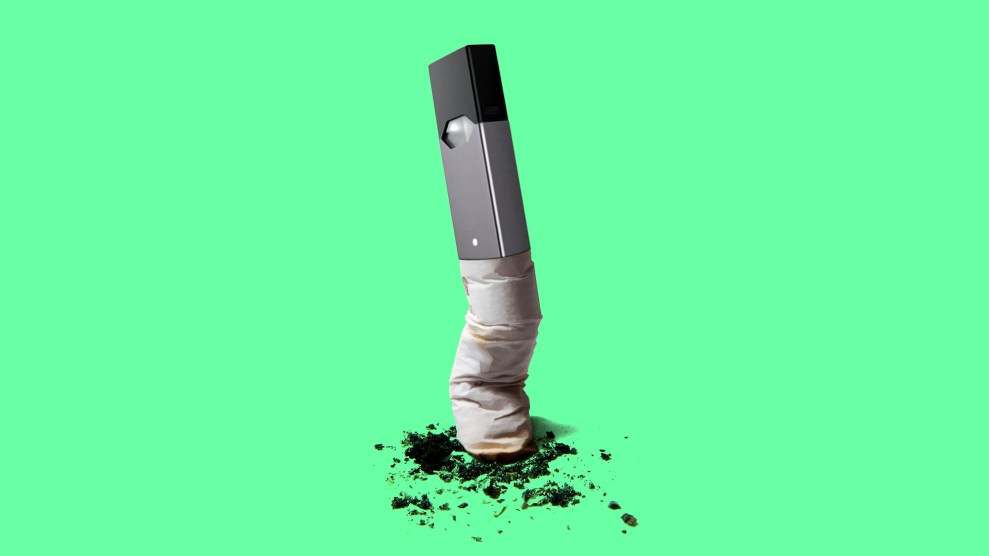 On July 25, Juul, the $38 billion e-cigarette company, appeared before the United States House Oversight Committee to explain its role in youth nicotine addiction.

Juul presented itself as a steward of public health before Congress. “Our incentive is to help [smokers] achieve their goal of transitioning from cigarettes,” said James Monsees, a co-founder of the company. “From the moment Adam [Bowen] and I began the journey, we were clear in our goal: to help improve the lives of adult smokers.”

Still, the company was pilloried the day before at the same legislative hearings for its marketing campaign that lawmakers determined was designed to get teenagers vaping.

At the hearing, Dr. Robert K. Jackler, a professor of medicine at Stanford and a tobacco researcher, testified that he found Juul had copied traditional tobacco ads’ tactics to “target young people.” His research began after one of Juul’s founders expressed gratitude for Stanford’s database of traditional tobacco ads. “He said they were ‘very helpful’ as they designed Juul’s advertising,” Jackler said.

Juul was also criticized for sending a representative to a ninth grade classroom in 2017—a representative who said the USB stick of nicotine was “totally safe,” according to a teenager who testified before the committee. The company told Mother Jones that it ended its education and youth prevention program after it found that its purpose had been “misconstrued.”

The hearing was just one example of a growing image problem that the company is seeking to correct with a small army of lobbyists and a push to raise the legal age to possess, purchase, and consume tobacco from 18 to 21. Juul has tried to present itself as a healthier option for smokers. Experts and public health advocates say, in fact, Juul is only copying a decades-old strategy used by tobacco companies: By pushing for industry regulation themselves, they maintain some control over the standards.

Some of the complication lies in the fact that smoking cigarettes is so horrifically toxic that almost anything is better—even Juul. This lesser-of-two-evils line of thinking led to academic debates about vaping as harm reduction, and “the industry is taking advantage of” this thinking, says Dr. Pamela Ling, a professor at the Center for Tobacco Control Research and Education at the University of California–San Francisco. For example, Juul proclaims itself a “satisfying alternative to the world’s deadliest consumer product—cigarettes” to explain its push to raise the age limit, and it touts research that positions flavored tobacco as helpful for those who wish to switch from cigarettes to vaping, rather than addictive themselves. But “safer doesn’t mean safe,” says Kathleen Hoke, a law professor at the University of Maryland who studies tobacco regulation.

In the last year, 12 state legislatures have passed laws that raise the age, including high-population states like Texas and New York. Some are backed by organizations like the American Lung Association. But many came into those statehouses as model legislation from health care advocates that was “transformed” by tobacco companies, according to a USA Today analysis of the proposed tobacco 21 bills. The catch is that the Juul-backed state bills sometimes include extra provisions that advocates fear could actually undermine the effort to stop teens from smoking, like one that could preempt stricter local enforcement of tobacco laws.

“In Virginia, Arkansas, and Utah, [Juul] swept in a horde of lobbyists” to help pass “terrible, unenforceable, tobacco ordinances,” said Dr. Rob Crane, president of the Preventing Tobacco Addiction Foundation, a group that lobbies to raise the age for buying tobacco to 21. Two of the bills lacked enforcement measures. Virginia’s law punishes only retailers, not tobacco companies, with small fines—at most $2,500 for three violations. There, a tobacco company representative even helped explain the legislation to the committee. Arkansas’ law prohibits local governments from regulating tobacco sales. Utah’s chapter of the Cancer Action Network, citing similar problems, even lobbied against the bill that would raise the age to 21. Local health advocates, who have fewer resources than Juul, found themselves overpowered when it came to creating regulation and pushing it in state legislatures.

Now, four federal bills—two in the Senate and two in the House—propose to raise the federal smoking age to 21. Juul is backing three of them, the most prominent of which is sponsored by Sen. Tim Kaine (D-Va.) and Senate Majority Leader Mitch McConnell (R-Ky.). The company has spent more than $1 million on lobbying from April to June this year, and they have hired a growing phalanx of lobbyists in Washington, DC. They have also worked to engender themselves with the Democratic Party’s black lawmakers by hiring former NAACP head Ben Jealous, recruiting Al Sharpton, and publicly pushing initiatives like a $7.5 million donation to a historically black medical school.

Though legislation to raise the legal age for tobacco consumption to 21 may sound like a move to protect youth from harmful health effects, experts say it’s more complicated than that. “We see that they want to put this out there to make it look like they’re the good guy,” Hoke says. “But they’re not really trying. They don’t expect it to really hurt their business.” The tweaked legislation would have a “negligible” impact on smoking, she says. Without dedicated enforcement—which fluctuates with state budgets and is complicated by the internet marketplace—raising the age limit may not do much. Raising the age to 21 in this way could prohibit local governments from passing measures that could also alter teen use, like banning flavored tobacco.

“The tobacco companies will promote legislation that on its face looks reasonable,” Ling says. “But written somewhere deep in the legislation, there are bad policies that actually undermine good tobacco control policy.” (Juul, for its part, says, “Ideally, every jurisdiction passes clean Tobacco 21 legislation, but that’s not always the case given state-level dynamics and politics. In those situations, we still support the bills that increase the age to 21 and will continue to work with elected officials to strengthen legislation in the coming legislative sessions.”)

Sussing out the exact policies in these bills can be tricky. Take the Kaine-McConnell bill making its way through the Senate. It includes a change to an obscure measure that required states to change the legal age to 18 for the sale of tobacco or lose federal funding. States began complying. “Sales to kids fell,” Crane said. If the Kaine-McConnell bill passes, the legal age will change to 21. Then, 32 states will be forced to update their local laws accordingly, and statehouses across the country will be working on tobacco legislation all at once, making it difficult for health advocates with less funding to compete with the tobacco industry. “We’ll be battling the industry—Juul, who has been hiring lobbyists like there is no tomorrow—on many fronts at one time,” Crane said.

As of today, the Campaign for Tobacco-Free Kids has counted at least 480 local municipalities, counties, towns, and hamlets that have passed tobacco 21 ordinances. “That was the secret sauce,” Crane said. “We couldn’t win statehouses against a horde of lobbyists. But when I would go to a city councilperson in Cameron, Missouri or Columbus, Ohio or San Francisco and sit across from a guy who is the local orthodontist on a city council and the PTA President—well, we never lost.”

Crane notes that if Kaine-McConnell bill becomes law, it would not only open the door for Juul to engage in mass lobbying across dozens of states, but it could also subvert the one tactic that he has found useful in stopping youth smoking: allowing local municipalities to pass bans.

Meanwhile, the public health advocates who argue against legislation that would raise the age to consume tobacco due to such concerns end up looking “kind of crazy,” Ling said.

Juul has pushed its “switching” message in San Francisco, where the company is based. Last year, the city banned the sale of flavors, and in June, it banned e-cigarette sales until the full authorization of the products by the FDA. “This effective prohibition will drive former adult smokers who successfully transitioned to vapor products back to combustible cigarettes,” Juul responded. The company has poured more than $4.5 million into a ballot initiative that could overturn that ban.

In May, Juul began collecting signatures for what appeared to be an initiative that calls for stricter enforcement of Tobacco 21 laws on vapor products. Deep within that ballot initiative is a clause that “rolls back the City’s ban on the sale of flavored e-cigarettes,” wrote Stanton A. Glantz, director for the Center for Tobacco Research Control and Education, on his blog, “and guarantees that Juul will remain welcome in the City,” The new regulation would “preempt and overrule” existing regulation, eliminating the progress already made on other bans.

Efforts designed to look like proposed self-regulation from big tobacco often have hidden rollbacks, according to Ling. In 1994, the tobacco industry, facing a slew of local laws regulating indoor smoking, went to the California legislature with a proposition that presented as cleaning up the air but actually swung against local ordinances that worked to curb their millions in lost sales by bringing jurisdiction to the state level. After the 1998 massive Master Settlement Agreement—a mea culpa in which the tobacco industry agreed to pay billions annually and end youth-targeted marketing after nearly every state’s attorney general sued to pay for the medical costs of smoking—the tobacco industry was required to create anti-smoking programs for teens. Tobacco companies used their punishment not to discourage smoking but to “portray smoking as an adult choice,” according to a research paper authored by Ling.

The programs “fail[ed] to discuss…the health dangers of smoking,” she wrote, concluding the tobacco industry youth programs actually did “more harm than good.”

Juul has put its own spin on this well-used strategy to portray their capitalism as moral. They use Silicon Valley speak to drag a false patina of early tech’s happy boom years onto the product as an alternative, Ling said. “But in many ways the actual product they put out is the same thing they’ve been trying to sell for decades,” namely, nicotine.

In this way, Juul sounds like many tech companies. It took a product—cigarettes—that were already popular, added tech to create e-cigarettes, and presented it as a brand-new tobacco alternative. It then used an under-regulated space—social media—to sell its product like mad. (Social media influencers were paid by Juul to target children, according to a congressional subcommittee, though the company is no longer on social media due to the potential appeal it would have for youth.)

Now, Juul finds itself in a stage also familiar to many tech companies—they must pretend to have “changed” when regulation begins.