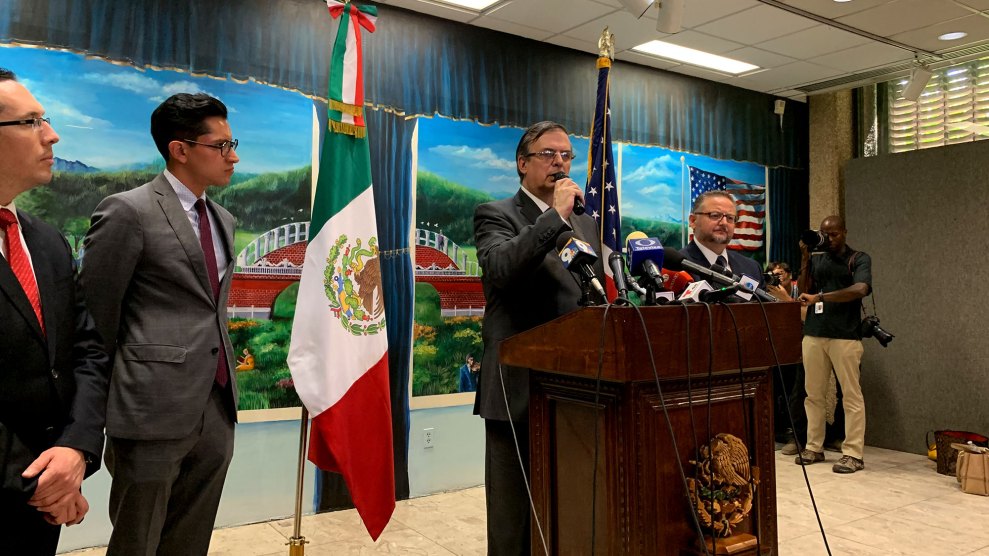 In the wake of the mass shooting in El Paso this past weekend, Mexico announced it would look into taking legal action. Monday night, Mexico’s foreign minister, Marcelo Ebrard, made clear just what the country might actually do, officially calling the shooting an act of terror against his country’s people.

“Mexico will participate in the investigation and later the trial against this perpetrator” because there are eight Mexican nationals dead as a result of the mass shooting, Ebrard said.

In a packed room full of reporters at the Mexican consulate in El Paso, Ebrard extended his condolences to the local community and said the United States and Mexico need to respect one another and work together in the aftermath of the violence. He said Mexico is trying to repatriate the bodies of the victims as quickly as possible and that the state will help with funeral services. Ebrard also highlighted the need to address racism and white supremacy as serious problems in the United States.

As for specific legal actions his country might consider, Ebrard said Mexico “is definitely going to present a case against the sale and distribution of weapons, such as the assault weapon that took the lives of eight Mexican men and women,” along with the 14 other victims. He didn’t go into specifics of how that would happen.

Mexico, he also noted, may go as far as trying to extradite the alleged perpetrator in this case. Ebrard noted he’d meet with the Mexican attorney general Tuesday to move any legal action forward.

The suspected shooter reportedly drove to El Paso from Dallas to kill as many Mexicans as possible, according to reports citing law enforcement, and to stop a “Hispanic invasion of Texas,” in the words of a manifesto he seems to have posted on 8chan shortly before the shooting. He targeted a Walmart in a shopping area that is frequently visited by Mexicans who cross north to shop. It’s one of the busiest in El Paso, where the large majority of residents are of Mexican descent and identify as Hispanic.

Shortly before the press conference Monday, I spoke with multiple people at the memorial who move fluidly between Ciudad Juarez and El Paso who said the neighboring cities are mourning together. I saw a woman and her daughter at the memorial set up near the site of the shooting; they were putting up a Mexican flag near the flowers and candles in honor of the Mexican victims. She told me they were there to pray for the victims because “we are all one community.”