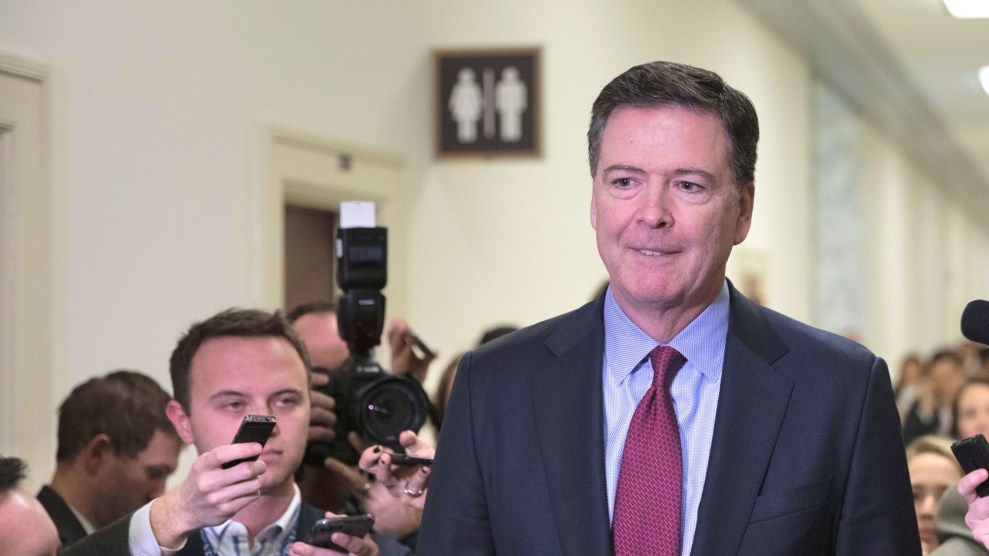 The Justice Department’s inspector general said Thursday that former FBI Director James Comey violated bureau policy in his handling of memos detailing interactions with President Donald Trump. The 61-page report faults Comey for setting a “dangerous example” for FBI employees by authorizing the leak of information in the memos, which describe Trump pressing the then-FBI director, who is supposed to operate free of political influence, for “loyalty,” pushing him to announce Trump was not under investigation, and asking Comey to drop an investigation into former national security adviser Michael Flynn. In May 2017, Trump fired Comey, who later said he had okayed the public release of information from his memos in a bid to encourage the appointment of a special counsel to investigate Trump campaign contacts with Russia.

But it’s hard to imagine that the alternatives the report suggests—contacting Congress, the inspector general’s office, or independent offices within the Justice Department—would have had anything near the galvanizing effect achieved by Comey’s decision to quickly publicize Trump’s possible obstruction of justice via the New York Times. The IG’s report does not grapple with whether Comey’s decision to publicly blow the whistle on Trump, regardless of it violating bureau policy, was good. Justice Department Inspector General Michael Horowitz is not tasked with making those calls. But many Americans surely believe that Comey made the right call.

“Comey did what he did because the president was actively trying to dismantle DOJ’s normal way of operating,” Matthew Miller, a former Justice Department spokesman under President Barack Obama, a frequent Comey critic, tweeted. “The [Attorney General] and [Deputy Attorney General] were both complicit, so Comey had nowhere else to take his concerns. It must be nice to live in the context-free world inhabited by the IG.”

Comey acted as a whistleblower, according to Danielle Brian, executive director of the Project on Government Oversight, a government watchdog group, in an interview with Mother Jones. But like other intelligence community employees who do not enjoy whistleblower protections available to federal employees, Brian said, Comey seems to have felt he had to break rules to expose wrongdoing. “There isn’t a safe way,” she said. “Whether it’s Comey or a low level intelligence community employee, what are they supposed to do when the they don’t have the channels to reveal misconduct?”

“It’s clear that he believed the conduct he was witnessing was wrong, and he felt that this was the only way that he could try to stop it,” Brian said. “It’s not about whether I like him or whether he’s right or not. That’s the standard we need to apply.”

The report is the latest chapter in an exasperating, controversial, and celebrated career in which Comey has repeatedly won attention for defying superiors he faults for political motives and applying his own values. His 2018 book, A Higher Loyalty: Truth, Lies and Leadership, outlined this pattern without dispelling charges of hubris and self-promotion. In 2004, Comey, then deputy attorney general, won acclaim on the left for blocking a push by White House Counsel Alberto Gonzales and President George W. Bush’s chief of staff, Andrew Card, to force Attorney General John Ashcroft, who was hospitalized at the time, to reauthorize Bush’s domestic surveillance program. In the midst of the 2016 presidential campaign, Comey, as FBI director, ignored instructions from Attorney General Loretta Lynch and held his own press conference in which he castigated Hillary Clinton for her use of a personal email server as secretary state, even as he announced she would not be prosecuted. Clinton and her staff “were extremely careless in their handling of very sensitive, highly classified information,” Comey said.

On Thursday, Horowitz announced that Comey will not face charges for mishandling information in his own memos that investigators later determined was “confidential,” the lowest level of classification. The report says the IG “found no evidence that Comey or his attorneys released any…classified information contained in any of the Memos to members of the media.”

The report quotes Comey describing his decision to ask his friend and lawyer Daniel Richman, a Columbia University law professor, to supply a New York Times reporter with details from Comey’s memo describing a February 14, 2017, meeting with Trump. During that meeting, Trump asked Comey to drop the bureau’s investigation into Flynn’s contacts with the Russian ambassador about sanctions Obama imposed on Russia. (Richman declined to comment.) Comey, who says he believed at the time Trump’s claim that he had secretly recorded their meetings, told the IG’s office he thought: “If I put out into the public square that encounter, that will force DOJ, likely to appoint a Special Counsel to go get the tapes.” And Comey said he reasoned that after his firing, “I’m a private citizen. I can talk about conversations I had with the President of the United States. I happen to have this conversation enshrined in an accurate way in this memo.”

Flynn later pleaded guilty to lying to the FBI about the his interactions with the Russian ambassador and agreed to cooperate with Mueller’s team. By generating publicity focused on Trump’s effort to curtail the FBI’s investigation, Comey probably did help create conditions for Mueller’s appointment and made it harder for Trump to meddle in the investigation. And Mueller’s final report, in its discussion of instances where Trump may have obstructed justice, cites Comey’s memos and recollections. Based on those findings, House Democrats are weighing whether to impeach Trump for obstruction of justice.

Ultimately, Comey can fairly be faulted for hypocrisy. He is self-righteous. He violated FBI policy. But was he wrong?