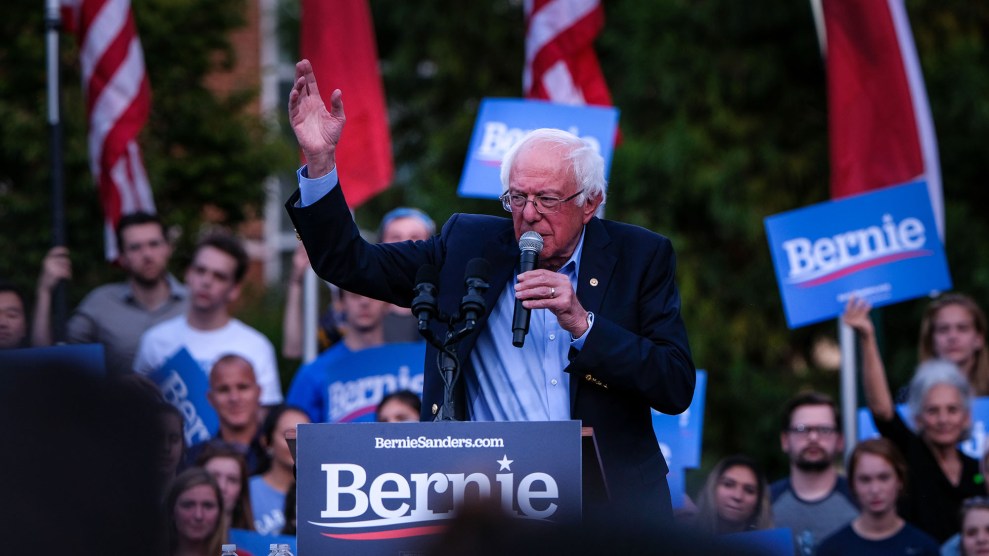 Senator Bernie Sanders campaigning at the University of North Carolina in Chapel Hill on Thursday. Preston Ehrler/SOPA Images via ZUMA

Bernie Sanders not only wants to eliminate future medical debt with his plan for Medicare-for-All, he also wants to wipe the slate clean for Americans who already have debt from unpaid medical bills. On Saturday, the Democratic candidate announced an ambitious plan to eliminate $81 billion medical debt for Americans, reform bankruptcy laws, and even put an end to credit score agencies.

“The very concept of medical debt should not exist,” Sanders said in a statement. “In the wealthiest country in the history of the world, one illness or disease should not ruin a family’s financial life and future.”

Medical debt is a significant economic burden on millions of Americans —and though there is an academic debate over exactly how many bankruptcies are directly attributable to it, health care expenses are the largest single causes of bankruptcies nationwide. According to a 2014 report by the Consumer Financial Protection Bureau, half of all debt reported to credit agencies is medical debt, and one out of every five credit reports contains unpaid medical debt. It’s also a serious—though hard to measure—hazard to people’s health. A 2018 study from West Health and Gallup found that a quarter of all Americans had skipped a medical treatment due to cost.

Under Sanders’ plan, the government would negotiate and pay off $81 billion in unpaid medical bills that have been sold to collection agencies and are currently harming people’s credit reports. His plan would also limit the notorious tactics debt collectors engage in when they track people down and hound them to collect on the debts they have purchased. If implemented, the plan might also come well under its $81 billion price tag as debt sold to debt collectors is worth only a fraction of the original bill.

In addition, Sanders’ plan would reform the 2005 bankruptcy law (the one Elizabeth Warren vigorously opposed and Joe Biden supported) so that it will be easier to forgive medical debt.

Finally, the proposal would stop medical debt from impacting people’s credit scores. Sanders would create a federal credit registry to rival and ultimately replace credit agencies like Equifax, and medical debt would not be factored into anyone’s score. “Credit scores also systematically perpetuate gaps in wealth and inequality between white and minority consumers,” the plan states. “We will establish a public registry that will end racial biases in credit scores and ensure those with medical debt are not penalized for the ‘crime’ of getting sick.”

On Twitter Saturday, Sanders’ campaign shared the experiences of some Americans weighed down by medical bills.

We asked people to tell us their most absurd medical bill. The responses were unbelievable.

We have got to end the disgrace of medical bills ruining lives.