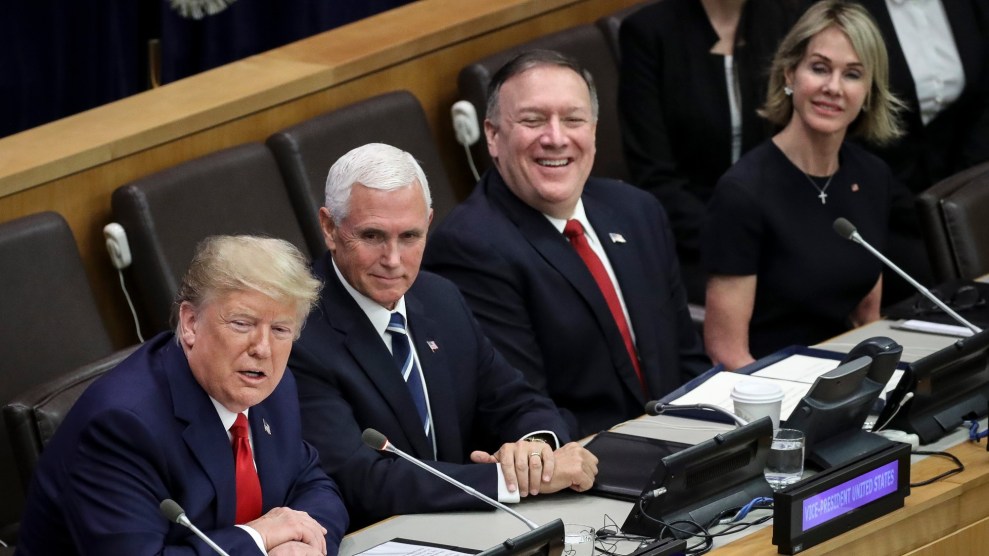 Nearly four years after proposing a ban on Muslim immigrants as part of his presidential campaign, Donald Trump devoted his first major appearance at this year’s United Nations General Assembly to religious liberty, a topic that has increasingly emerged as a central administration talking point.

“Approximately 80 percent of the world’s population live in countries where religious liberty is threatened, restricted, or even banned,” Trump said at the event, citing a statistic from a Pew Research Center report that also attributed anti-Muslim sentiment, in part, to him. “When I heard that number, I said, ‘Please go back and check it because it can’t possibly be correct.’ And, sadly, it was. Eighty percent.” (It’s actually 83 percent.)

Trump and his advisers, including Vice President Mike Pence and Secretary of State Mike Pompeo, love this statistic. They’ve invoked it several times during the administration’s months-long push to make religious freedom a central plank of American foreign policy, which has included two State Department summits and Trump’s Oval Office meeting in July with victims of religious persecution.

And while they’re quick to highlight American adversaries like Nicaragua and Venezuela, as Trump did in his Monday speech, they often fail to mention an ally which Pew rates as one of the worst suppressors of religious freedom: Saudi Arabia.

Under the growing influence of Crown Prince Mohamed bin Salman, who Trump praised in June for sparking a “revolution in a very positive way,” Saudi Arabia has already executed 134 people this year, on pace for an increase over last year’s total of 149 prisoners killed, according to a report submitted to the UN Human Rights Council in Geneva last week. Six were children at the time of their alleged crimes. Among the slain were 37 men, mostly from the country’s Shia Muslim minority, who were killed en masse in April. Saudi authorities accused them of links to terrorist organizations, but those arrested “didn’t appear to be connected to Islamic State or another extremist group,” the Wall Street Journal reported.

Saudi Arabia performs most executions by beheading and, in many cases, the country “failed or refused to release the bodies of victims of executions to their families,” the report stated. Charges “appear to broadly relate to political dissidence and participation in protests,” and are often extracted by forced confessions. One detainee awaiting execution by crucifixion, which means his body will be displayed after the beheading, was 15 at the time of his arrest and confessed to a range of nonviolent offenses, such as “chanting slogans,” after what the report describes as “beatings with iron rods.”

The report, compiled by British human rights lawyer Helena Kennedy, brought more international condemnation on Saudi Arabia and the crown prince, whose early reputation as a moderate reformer has fallen apart amid his costly intervention in Yemen’s civil war and crackdown on dissent among Saudi elites, which culminated in the murder last year of Jamal Khashoggi, a Saudi journalist writing for the Washington Post. The CIA determined in November that the Saudi crown prince ordered the killing.

Even the State Department has acknowledged the kingdom’s sordid history of persecuting religious minorities. “Freedom of religion is not provided under the law,” a department report on religious freedom flatly stated earlier this year. “The government does not allow the public practice of any non-Muslim religion.” The US Commission on International Religious Freedom, a bipartisan advisory body, drew attention to the State Department’s uneven response to Saudi Arabia in a blistering statement after the kingdom’s mass executions of mostly Shia men in April. “The State Department must stop giving a free pass to the Saudi government, which, for many years, has punished numerous Saudi citizens and expatriate workers for exercising their fundamental right to freedom of religion or belief,” commission chair Tenzin Dorjee said, noting that the US has repeatedly identified Saudi Arabia as a “country of particular concern” for its religious persecution, but has held off on issuing any punitive action for more than a decade.

Far from scolding Saudi Arabia, Trump has praised its crown prince for doing “a really spectacular job” fighting terrorists and granting women the right to drive. (Left unsaid was Saudi Arabia’s year-long imprisonment of the same activists who pushed for that modernizing change.)

Trump himself is no “tireless champion of the freedom of religion,” as Pence claimed in his introductory remarks at the UN. In addition to promoting a Muslim ban, which his administration softened into a travel ban affecting several majority-Muslim countries, Trump has frequently trafficked in anti-Semitic tropes and once said there was “a Muslim problem in the world.” His religious freedom push writ large has often received criticism for seeming to be geared more toward Christians at the expense of other minority groups.

Saudi Arabia has been an American ally for decades, but Trump has taken a relationship with its roots in the oil and arms trade and foregrounded the unsavory quid pro quo inherent to a partnership between an authoritarian theocracy and Western democracy. “After my heavily negotiated trip to Saudi Arabia last year, the Kingdom agreed to spend and invest $450 billion in the United States,” Trump noted in a 638-word statement defending the Saudis in November, as pressure tightened on the White House to hold the kingdom accountable for Khashoggi’s murder. “This is a record amount of money. It will create hundreds of thousands of jobs, tremendous economic development, and much additional wealth for the United States.”

The high regard with which Trump holds the Saudis was most apparent on Friday, when he approved the deployment of US troops to the Middle East in response to an apparent Iranian attack on two Saudi oil facilities. (No evidence has emerged to definitively link Iran to the attack, and the Islamic republic has denied responsibility, but Trump administration officials like Pompeo have blamed them for it.) Trump, who has otherwise criticized American allies for expecting the US to foot the bill for their defense, tweeted in support of the Saudis in a way that suggested he was relying on their direction before responding.

Saudi Arabia oil supply was attacked. There is reason to believe that we know the culprit, are locked and loaded depending on verification, but are waiting to hear from the Kingdom as to who they believe was the cause of this attack, and under what terms we would proceed!

“Too often, people in positions of power preach diversity while silencing, shunning, or censoring the faithful,” Trump said during his UN speech. “True tolerance means respecting the right of all people to express their deeply held religious beliefs.”