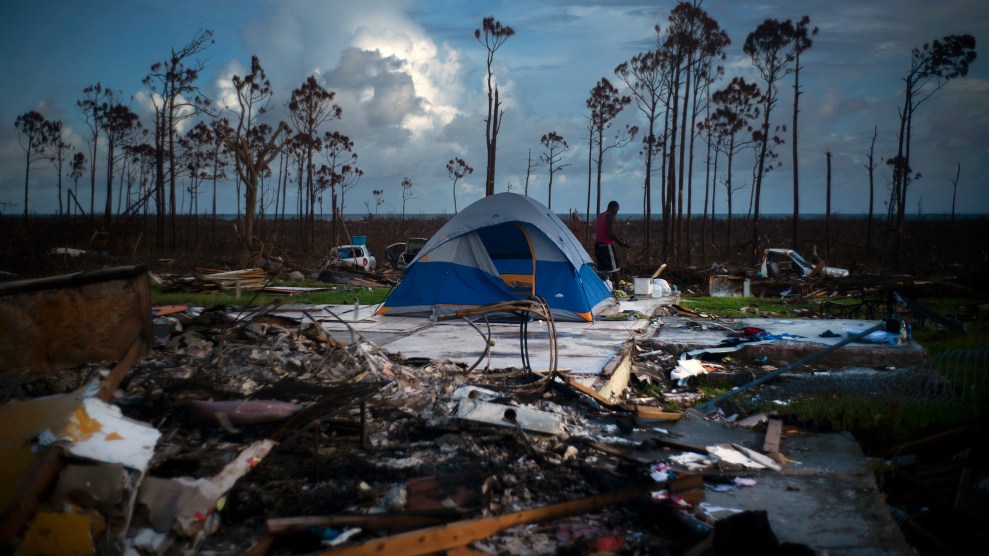 A man in the Bahamas searches through rubble after Hurricane Dorian.Ramon Espinosa, AP

The outer banks of the Carolinas and the Bahamas are picking up the pieces after the battering from Hurricane Dorian—the first direct hit of this year’s extreme weather season. Already the damages for 2019 are well above the 40-year average for billion-dollar events, and the price tag for damages will rise dramatically over the next decades. At the current rate of warming, the US could see more than 10 percent of its annual GDP wiped out by the end of the century from the extreme heat and flooding.

So, who is going to pay for all that?

Until recently, the costs of climate change have been “entirely externalized and foisted on taxpayer,” says Columbia University climate law director Michael Burger, while polluting industries have remained largely unscathed. There are now hundreds of active lawsuits by kids, business, and cities against fossil fuel companies and against governments that have long known the risks of climate change but chose inaction. Only a few of the global lawsuits have been successful so far, and some 21 liability cases active in the US are even more slow-moving, as the Ninth Circuit Court of Appeals decides if and how to let them proceed.

Together all these cases could wind up changing the calculus of who pays for the impacts from climate change. Their secret weapon is a cutting edge area of climate science. It’s known as attribution science and has already transformed the way we discuss disasters like Hurricane Dorian by getting much more specific about how much we can blame fossil fuels and the companies that produce them for the extent of the damage.

“The more certain the science becomes that specific kinds of extreme events are caused by climate change,” Burger says, “the more likely it is that people can go to the court to pay for the costs from these events and the damage that results from them.” But there is one lingering issue, he adds: “Whether any of them succeed in holding companies accountable is very much an open question.”

If an oil pipeline breaks, you can easily point to who was responsible for the spill. However, climate change is a global problem, caused by global emissions that have uneven impacts. To sue someone, you have to prove that they caused you measurable harm. By its very nature, climate change is a difficult problem for courts to untangle.

With increasing specificity and speed, scientists have been able to tell us how much worse climate change made an extreme weather event.

Except that has changed. With increasing specificity and speed, scientists have been able to tell us how climate change intensified an extreme weather event. Now we can learn the effects almost in real-time. For instance, within weeks of the extreme heat wave in Europe this summer or the flooding from Hurricane Harvey in Houston in 2017, researchers published working papers explaining how much worse they were made by climate change. (Europe’s heat wave was 10 times more likely because of warming, and in Houston there was 38 percent more rainfall.) Still another paper analyzed how climate change fueled California’s 2012-2014 drought (up to 27 percent worse). Yet another focus of research looks at how much, say, Exxon’s historic pollution is responsible for today’s climate impacts—another area of attribution science called source attribution.

“The court room is a new frontier around addressing climate change, and I think there’s a relatively small number of scientists including myself who are engaged,” says Peter Frumhoff, chief climate scientist with the advocacy group Union of Concerned Scientists. “But as these cases emerge and proliferate, there’s an opportunity for attribution science to inform climate law…This work is at an early proof-of-concept stage.”

As E&E News noted last month, environmental lawyers expect “the next wave of climate litigation is not a matter of ‘if’ but ‘when.'”

The lawyers working on advancing climate liability cases in the courts see the advances in the science as integral to building their cases against governments for inaction, and major fossil fuel polluters for misleading the public and investors. It helps them explain why plaintiffs have standing to sue, and how the corporations and governments turned a blind eye to the robust evidence before them.

“The source attribution work is a game-changer,” Greenpeace senior legal counsel Kristin Casper says. “Because to date we’ve really looked at the responsibility for climate change in terms of emissions by country, rather than by company…It’s a way for lawyers that are working with these communities to connect the dots between the company’s emissions and their global emissions to specific impacts, whether global average temperature rise or sea-level rise.”

The science already has taken center stage in early high-profile lawsuits like the 2015 Our Children’s Trust case that takes the US government to Oregon federal court for failing to act on carbon pollution. Juliana v. United States may never go to trial, but the hundreds of pages of expert testimony submitted so far provides something of a blueprint for the way science will be used going forward in other cases that have started to target the major oil and coal companies. Lawyers for the case can’t just argue that the White House has a responsibility to address carbon, but that scientific evidence proves the pollution has caused harm to the children who are the plaintiffs. Climate scientist James Hansen has been brought in to provide corroboration for some of those arguments.

A working paper by Burger and his colleagues at Columbia Law looking at the role climate science plays in the courtroom notes, “Attribution data is a valuable complement to impact projections as it can be used to establish an existing injury while also lending credibility to projections of future harm.”

The field is evolving fast, and Frumhoff is one of the scientists interested in exploring the strategic role science can play in these lawsuits. He sees the opportunity for more research that looks at connecting the economic impacts from disasters to the direct source of the pollution. “I’m interested in understanding what kinds of science are most relevant and useful to informing climate litigation,” he says. That could mean instead of having a multi-billion-dollar disaster, we have a multi-billion-dollar disaster in which we know how much of its financial liability lies with Exxon. Depending on how early court cases proceed, this kind of research may present huge implications for the fossil fuel industry in a whole host of future extreme weather events.

Exxon and other oil companies are aware of the threat they face in the courtroom. Exxon has backed the Climate Leadership Council lobby for a federal carbon tax. Until last week, the proposal had some revealing fine print: “Robust carbon taxes would also make possible an end to federal and state tort liability for emitters.” The lobby recently dropped the immunity provision from its carbon tax—but left the door open for its return.