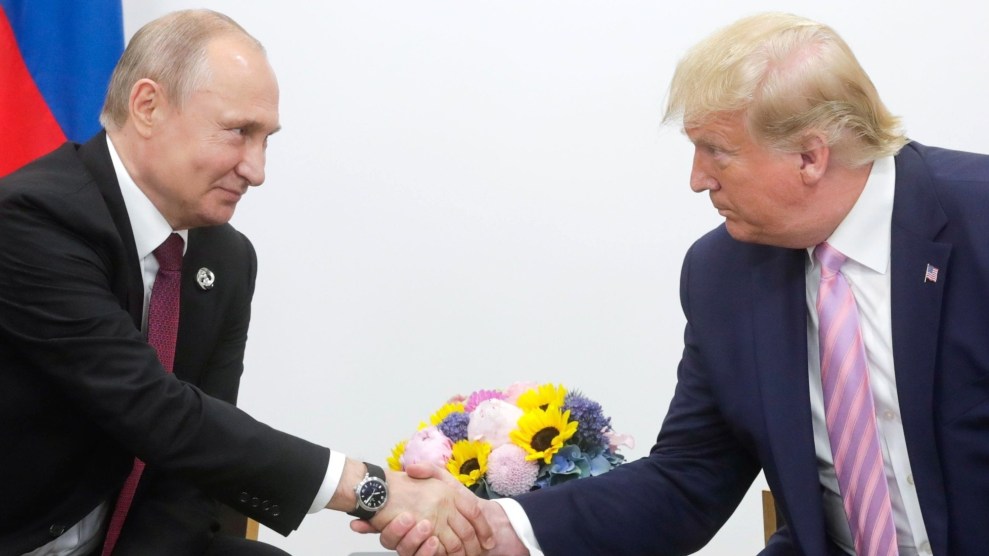 The Russians are coming.

That’s the message about the 2020 election from FBI Director Chris Wray (who this summer said Moscow is determined to interfere in the next presidential contest) and from former Director of National Intelligence Dan Coats (who warned that Vladimir Putin’s regime and other foreign actors will concoct new methods for messing with American politics in 2020). Yet Donald Trump and his administration have done little to signal that thwarting another Russian attack—or an assault on the election from any other source—is a priority. In the months before Kirstjen Nielsen was booted from her post as Department of Homeland Security secretary, she was instructed not to raise with Trump the issue of preventing Russian interference in 2020. (Any talk of Russia’s attempted subversion of US elections apparently irks Trump—as it should, for his election victory is indeed tainted by Moscow’s intervention.) And Trump, who has never fully acknowledged Putin’s attack in 2016, recently noted that he would accept secret help, in the form of dirt on a political rival, from a foreign government for his reelection campaign. That remark, his call to allow Russia to reenter the G8, and his general Russia-didn’t-do-anything stance certainly send a signal to Putin: Feel free to do it again. Meanwhile, Senate Majority Leader Mitch McConnell has blocked votes on a variety of election security bills.

All of this is particularly maddening because there are steps the US government could take to prevent a repeat of 2016 or something worse. A new report released by the Center for American Progress, a liberal think tank, chronicles what other Western governments have done to counter Moscow’s efforts and outlines steps that could be adopted in the United States to beat back an attack on the next election. (CAP was founded by John Podesta, who certainly cares a lot about Russian attacks: When he was chair of Hillary Clinton’s campaign, his emails were hacked by Russian operatives and leaked by WikiLeaks through the final four weeks of the 2016 campaign.)

The study, written by James Lamond and Talia Dessel, notes that “Russia is consistently shifting and updating its interference tactics, making it even harder to protect future elections,” and the paper examines several case studies of Russian intervention since the 2016 election. In 2017, Moscow sought to influence the French presidential election to boost the odds for Marine Le Pen, the National Front candidate running against Emmanuel Macron on an anti-immigrant, anti-EU, anti-NATO, and pro-Russia platform. During that race, Russia mounted a disinformation campaign using rumor and forged documents, cyberattacks on campaign officials, and a leak of stolen data. That same year, Russia-linked trolls and bots amplified the messages of the far-right Alternative for Germany party, known as the AfD, in Germany during the federal election there. (The Kremlin also boosted the themes of the left-wing anti-fascists—a sign Moscow was aiming to sow overall political discord.) In 2018, Russian state propaganda outfits consistently smeared Sweden, while a populist, anti-immigrant party was vying for power in that country’s election. In 2019, Russia-linked operatives used disinformation efforts during elections for the European Parliament to suppress voter turnout.

Moscow’s information warfare in these cases had mixed results. Despite what the report calls “perhaps the most expansive foreign interference campaign Russia launched since the 2016 American election,” Macron decisively vanquished Le Pen. (Her party, though, had been rescued from financial trouble with a $12.2 million loan from an obscure Russian bank. And Le Pen reaching the run-off that she lost to Macron might have been a Russian success.) In Germany, Angela Merkel secured her fourth win as German chancellor, but the far-right AfD achieved its own victory, becoming the third-largest party in the Bundestag. The Swedish election led to a loss in seats for the center-left and center-right parties and a boost for the anti-immigrant party. The European Parliament election resulted in small gains for the anti-EU parties likely favored by Moscow but it yielded less of an anti-EU wave than widely expected.

In each of these instances, the CAP report details, governing forces took actions to foil Russia’s attempts at undermining democracy. The French government provided cybersecurity seminars for political parties. (La Pen’s National Front, for some reason, did not accept this assistance.) And France’s national election commission and its national cybersecurity agency frequently warned the public, the media, and the parties of the risks of cyberattacks and disinformation. The outgoing president, François Hollande, privately warned Putin not to mess. Various media outlets and Google implemented fact-checking projects to counter disinformation. And a traditional media blackout—imposed in the final days of French campaigns—prevented the widespread dissemination of hacked material that was leaked with the intention of harming Macron. Throughout the campaign, the government and Macron’s campaign constantly informed the public of the threat of foreign intervention.

The German government adopted measures to fortify its cybersecurity to protect its election system. It developed a “hack-back” strategy that included the use of possible offensive cyberattacks against hackers. Merkel’s government conveyed a clear message to the Kremlin: Russian interference would not be tolerated. It offered assistance to political parties to strengthen their cyber-defenses. Merkel’s government frequently reminded the public of the threat of Russian interference. And, the report notes, “With the encouragement of the German government, all the political parties, with the notable exception of the Russia-aligned AfD, pledged not to use social media bots, and parties also pledged not to use leaked information.” (Germany also uses paper ballots—a system, the CAP report points out, that’s tougher to manipulate from the outside.)

The Swedish government regularly issued updates about its plans to secure the election and ran a program to educate voters about the threat of interference. Swedish media developed a joint fact-checking operation to call out foreign disinformation. (“The incredibly forceful and proactive approach from the government is perhaps the most important lesson from the Swedish experience,” the report states. “Unlike many other Western governments that were caught off guard by Russian interference, the Swedish government was prepared and vigilant, working through multiple channels to prevent Russia’s interference campaign from being more effective.”) In the run-up to the European Parliament elections of 2019, the EU established a Rapid Alert System that allowed member states to share information about disinformation schemes. (The RAS, however, had a spotty record.) The EU also created a task force to identify Russian disinformation campaigns and produce public reports about Moscow’s efforts. The CAP study also notes that the 2017 Dutch election apparently occurred without any serious Russian involvement—and that might be because the Dutch government engaged in robust preparations that may have undercut Russian efforts to mount disinformation efforts there and to hack the email accounts of Dutch officials.

So what can the United States gather from all of this? Well, not surprisingly, CAP has drawn some lessons and proposes a set of recommendations. The first lesson: “A forceful government response is the most important deterrent and mitigating factor.” And that would entail sending Moscow a “clear, bipartisan message” to keep away or risk severe punishment, including tough sanctions. Lesson two: Develop situational awareness among voters. As the authors put it, “Public awareness about foreign influence campaigns is perhaps the single most important defense against such interference and an essential tool toward building a resilient democracy.” The paper recommends that Congress hold hearings to highlight how Russia supports fringe political outfits around the world and that legislators should require the government to notify the public when foreign interference in American politics is detected. CAP also calls for media outlets to “refuse to quote stolen material that clearly has been released as part of an influence operation by a foreign power, as this creates a reward or incentive for Russia to hack and release stolen information.” It urges the adoption of a paper-ballot system and stricter regulation of foreign money in US political campaigns.

This is a fine wish list. There are obviously some immediate roadblocks, such as Trump, Trump, and Trump. And, oh yes, the Republicans. Trump and his cronies will not be formulating a robust, comprehensive, and bipartisan strategy to impede Putin anytime soon. McConnell has even managed to bring the Federal Election Commission, which could more vigorously investigate the flow of foreign money into American politics, to a standstill. (In 2016, McConnell single-handedly prevented the Obama administration from presenting a bipartisan warning to the public by refusing to participate in any effort to call out Moscow, perhaps fearing that would place him at odds with then-candidate Trump, who was falsely claiming Russia was not interfering in the election.) And it will be damn hard to persuade American reporters to eschew hacked material that is publicly released. Moreover, the US voting system is a crazy quilt of local systems, many under-financed; it is difficult to implement defensive reforms that cover all of it.

But this report shows that American democracy need not be vulnerable to Moscow manipulation or assaults from other quarters. Even with Trump and his GOP comrades refusing to honor their obligation to defend the country, other players can take defensive actions. Political parties, individual members of Congress, government officials not under Trump’s thumb, media outlets, and local election officials can proceed on their own with a variety of measures that will render it tougher for foreign adversaries to subvert American democracy. What matters most is will. Government officials, political professionals, the media, and the voters have to give a damn. If they do, there are ideas to implement—even if Trump has no interest in impeding Putin.