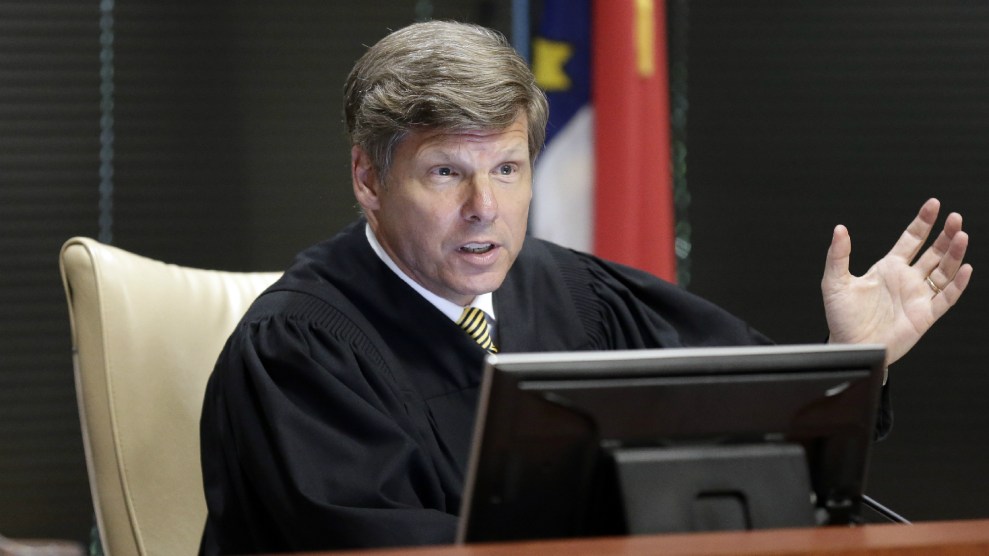 On Tuesday, a panel of three judges ruled that legislative districts drawn by Republican lawmakers for state legislative races “do not permit voters to freely choose their representative” and therefore qualify as partisan gerrymandering.

The striking decision in Common Cause, et al v. Lewis found partisan gerrymandering “contrary to the fundamental right of North Carolina citizens to have elections conducted freely and honestly to ascertain, fairly and truthfully, the will of the people.”

According to the ruling, the maps were purposefully created in 2017 to maintain a Republican supermajority in the state legislature. North Carolina has a long history of voter suppression, but the judges deemed these maps “tainted by an unconstitutional deprivation of all citizens’ rights to equal protection of law, freedom of speech, and freedom of assembly.”

The map drawer, in this case, was Thomas Hofeller.

Hofeller, a GOP redistricting mastermind who worked with the Trump administration to add a citizenship question to the 2020 census, was hired by North Carolina to help redraw the state legislative maps after the federal court tossed out the racially gerrymandered districts from 2011. After he died, documents were turned over to the court and became linchpin evidence of the purposeful nature of partisan gerrymandering.

In Hofeller’s documents, the court found “hundreds of files focused overwhelmingly on each party’s expected vote share in the draft districts and on the identities and party affiliations of the incumbent members in each district.” The decision notes this was “persuasive evidence that partisan intent predominated in the drawing of the 2017 Plans.”

The maps in question were created in 2017 after a federal court threw out the old legislative districts for racial gerrymandering, but the new maps were also challenged for attempting to cement a Republican majority. Republican David Lewis, who chairs the state’s Senate Committee on Redistricting, openly discussed plans to create partisan districts. In November 2018, a group of North Carolina voters, the Democratic Party, and Common Cause, a voting rights group, filed a lawsuit on the grounds that the maps violated the state constitution.

Jowei Chen, a University of Michigan political scientist who works on voting maps, documented starting discrepancies in the maps. He determined, and the court agreed, that the redrawn districts “cannot be explained by North Carolina’s political geography.” In simulating potential plans, North Carolina’s 2017 maps appeared as a vast outlier in certain measures of map fairness, such as splitting of municipalities and compactness of districts.

Lawmakers in the state have until September 18 to prepare new maps, which may crack a window for Democrats as the 2020 election season approaches. If they retake a majority in the state legislature under fair maps, it would put them in charge of redrawing maps after the 2021 census in North Carolina, which would be crucial in the wider push by Democrats, led by Eric Holder, to fix lingering gerrymanders by Republicans.