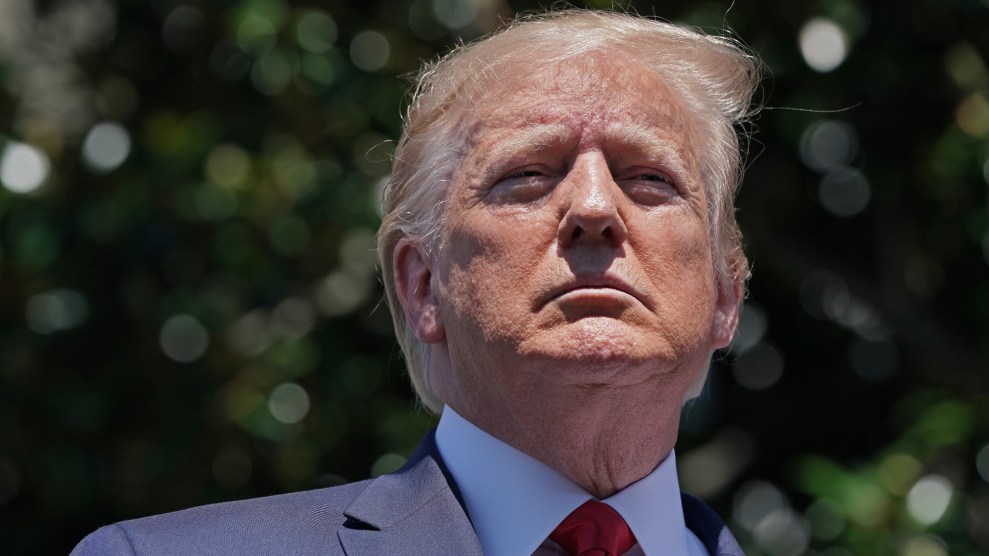 The long-anticipated whistleblower complaint that has become a central part of House Democrats’ impeachment inquiry against President Donald Trump was finally released Thursday, and it did not reflect well on the White House.

There was already damning public information thanks to a memo, released Wednesday, detailing what was said during Trump’s July 25 call with the leader of Ukraine, but the whistleblower’s complaint hints at other, similarly troubling conversations and a sprawling White House effort to cover it up. After Trump’s call with Ukranian President Volodymyr Zelensky , the whistleblower, a member of the intelligence community whose identity has not been revealed, claims that White House officials moved to “lock down” records of the call and improperly store them in an electronic system reserved for classified information. Crucially, the whistleblower added that this was “not the first time” Trump’s advisers have had to abuse this system to shield evidence of his calls with foreign leaders for political, not security, reasons.

The allegations were deemed “credible” by acting national intelligence director Joseph Maguire and intelligence community inspector general Michael Atkinson, both Trump appointees, but unsurprisingly, its findings were immediately challenged by Trump and his most rabid supporters. Trump fired the first volley Thursday morning from his Twitter feed with an all-caps message that said Democrats were trying to destroy the Republican Party “AND ALL THAT IT STANDS FOR.” He later deleted the tweet.

White House officials have already attempted to paint the whistleblower as a politically-motivated leaker, despite Maguire’s contention to House Intelligence Committee members during a Thursday hearing that he does not know the person’s identity. Fox News reported Tuesday that “the administration will release a document showing” the whistleblower “had indications of ‘political bias’ in favor of ‘a rival candidate’ of the president.” Atkinson also acknowledged to the Justice Department that the whistleblower has “some indicia of an arguable political bias,” but said the complaint nonetheless raises “urgent concern.” (The Office of the Director of National Intelligence also indicated in a letter to the whistleblower’s attorney that ODNI believes the complainant “has acted in good faith and fully complied with the law.”)

But the Trump administration is disregarding the assessment of the intelligence community. Their alternative line of reasoning was reflected in a set of White House talking points, which the administration inadvertently sent to House Democrats on Wednesday. “This case,” the White House statement said, “just shows another example of the ‘Deep State,’ the media, and Democrats in Congress damaging out national security by leaking confidential information in an attempt to seek political gain.”

During a private speech Thursday morning to American staffers at the United Nations, Trump said whoever provided information to the whistleblower was “close to a spy” and alluded to severe punishments for spies “in the old days,” according to reports in the New York Times and Los Angeles Times.

On Twitter, Trump’s son, Donald Trump, Jr., attacked “the media and their bosses at the DNC” for pushing the whistleblower’s narrative, which—it’s worth emphasizing—emerged from within Trump’s White House.

For 2.5 years we were told there was collusion, then obstruction, then it was a cover-up… rinse and repeat.

Seems the media and their bosses at the DNC are just desperate to push something other than the results @realDonaldTrump is getting for America. https://t.co/rqljc02kSw

The whistleblower’s politics dominated pro-Trump Twitter, where the still-unknown intelligence official was painted as a liberal Trump critic.

“I heard some things, I read some things in the news, I don’t know anything but I don’t like @realDonaldTrump so I am going to give cynical Democrats in Congress an opportunity to attack him.”

The so-called #WhistleblowerComplaint is out and it's clear it's the work of a political hack who has it out for @realDonaldTrump. Obviously this person is attempting to do what dems always do. Let's pretend the right did what we did and act shocked. #WhistleblowersComplaint

Hot take from a smart guy: “Just read whistleblowers complaint. Theory, this is a cover up, not just of Biden, but the whole Clintons obama Biden collusion debacle riff with illegality. The complaint is someone in that mix trying to cover their ass.”

Other Trump defenders, including former administration official Fred Fleitz, stuck with the narrative of an anti-Trump conspiracy. Fleitz, who served as chief of staff to national security adviser John Bolton and was under consideration to be Trump’s director of national intelligence, wrote in a tweet that the complaint was “too convenient and too perfect to come from a typical whistleblower.”

5/ My view is that this whistleblower complaint is too convenient and too perfect to come from a typical whistleblower. Were other IC officers involved? Where outside groups opposed to the president involved?

Fleitz’s hunch, which he floated online without evidence, is that Democratic House Intelligence Committee staff might have helped “orchestrate” the complaint. “It is therefore important that Congress find out where this complaint came from,” he wrote.

Not all Republicans were so easily persuaded that the complaint was a nothing burger. “There is a lot in the whistleblower complaint that is concerning,” Rep. Will Hurd (R-Texas), who is not seeking reelection, tweeted Thursday morning. Sen. Ben Sasse (R-Neb.), a member of the Senate Intelligence Committee, called the complaint “troubling” and said “Republicans ought not just circle the wagons” to protect Trump just yet.

Not one House Republican has indicated support yet for Speaker Nancy Pelosi’s decision to formally launch an impeachment inquiry. More than half of all House members—218 Democrats and one independent per the New York Times—do support the inquiry.