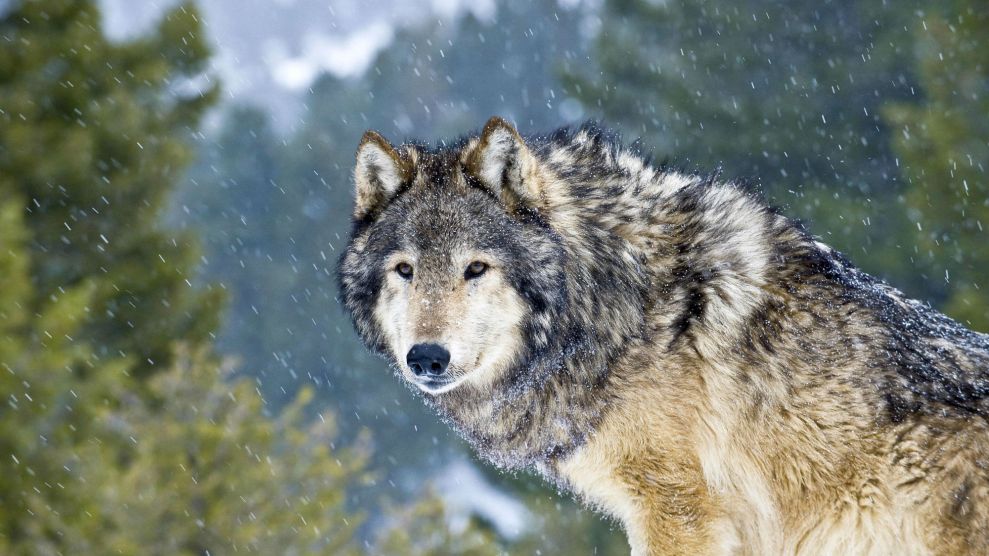 Trump’s war on wildlife continued this week when new rules went into effect that weaken protections for plants and animals listed under the Endangered Species Act, a powerful environmental law responsible for saving the bald eagle, humpback whale, and brown pelican from extinction. The Trump administration announced the final set of rules last month—a move decried by environmental activists as “illegal,” “dangerous,” and a “careless disregard for our nation’s public lands and wildlife.”

As with several of the administration’s policies in this realm, the regulations are largely seen by environmentalists as a blow to vulnerable species and a boon to industry. Activists and lawmakers have already sprung into action: Environmental groups promptly sued the Trump administration after the new rules were announced last month. On Wednesday, a coalition of state attorneys general led by California, Maryland, and Massachusetts also sued the administration over the changes. And earlier this month, the US Senate and House of Representatives introduced bills to block the rollbacks.

While we wait for the courts and Congress sort out the legality of the new rules, they will start to alter the way the Endangered Species Act is enforced in ways both big and small—immediately putting plants and animals already at risk in new danger. Some major changes include:

Overall, the new rules are so far-reaching that most species listed under the act or waiting to be listed will be affected in one way or another, experts say. Others may be affected if and when they are listed or petitioned to be listed. Here are nine examples of animals that will likely be made even more vulnerable by Trump’s changes:

Status: Petitioned to be listed

In the past two decades, the monarch has declined by nearly 90 percent, according to the Center for Biological Diversity, which petitioned for it to be listed under the Endangered Species Act in 2014. It’s threatened by climate change, pesticides, and habitat loss.

“[P]opulations of this magnificent seabird in the three states, as well as in Japan, are in trouble, as lack of prey, climate change, fishing, oil spills, and other dangers take their toll,” the Natural Resources Defense Council wrote in 2014, the year the organization petitioned for the puffin’s protection under the Endangered Species Act. Tufted puffins, named for the fluff of yellow hair atop their heads, can be found in California, Oregon, and Washington.

Some moose populations in the Midwest—Michigan, Minnesota, North Dakota, and Wisconsin—are under consideration for listing. Things are particularly bad for the moose in Minnesota, where only a few thousand of these massive mammals still roam, the Center for Biological Diversity estimated in 2016. The species is threatened by climate change, habitat loss, and other factors.

“This tiny toad is already threatened by invasive species, disease, climate change, groundwater extraction, and livestock grazing,” according to the Center for Biological Diversity. Native to Nevada, the toad was already “imperiled” by the time researchers first identified it in 2017.

The Pacific walrus, whose habitat includes sea ice, is likewise threatened by climate change. And “when the Fish and Wildlife Service evaluates whether it should be listed as threatened, they will need to look at climate data,” Rebecca Riley, legal director of the NRDC’s Nature Program, tells Mother Jones. “And the rule changes will make it harder for them to do so.”

“The wolverine is really a winter animal. They den in areas where there’s persistent spring snowpack,” Noah Greenwald, endangered species director at the Center for Biological Diversity, tells Mother Jones. “And obviously, with climate change, we’re losing that spring snowpack.” Even if the wolverine gets listed as threatened, says Greenwald, the new regulations will make it harder to protect its habitat. “The whole idea that something that’s threatened by climate change doesn’t need habitat protection is just absurd. If they’re going to have any chance to survive, you have to protect more habitat, not less.”

The grizzly bear has been at the center of a legal battle lasting more than a decade between the Fish and Wildlife Service, which has moved to de-list the species, and environmental groups, which have sued to maintain its threatened status. Now, if the bear is de-listed, activists worry getting it re-listed under the new rules would be harder than ever before, as the species is threatened by climate change, according to Nicholas Arrivo, a staff attorney at the Humane Society of the United States. “They are losing staple food sources like the whitebark pine because of climate change. And so indirectly, they are becoming threatened by the loss of a climate-sensitive food source.”

In 2018, the Fish and Wildlife completed a scientific review of the Canadian lynx in the United States and found that the species had recovered and “may no longer warrant protection under the Endangered Species Act.” It recommended the species should be considered for de-listing. But Greenwald says the service didn’t consider the long-term impacts of climate change in its assessment, based on the now-codified definition of what “foreseeable future” means. The species will be “functionally extirpated,” or functionally extinct, in some areas by 2100, but “somehow, it’s ‘recovered’ and ‘de-listed,'” he says, “And that’s all under how far they look into the ‘foreseeable future.'”

Under the new regulations, the Fish and Wildlife Service may play less of a role in overseeing federal activities on endangered and threatened species’ habitat, like the gray wolf’s, Arrivo says. “Gray wolves are listed species in western states that are near potential sites for mineral exploration, mining, oil drilling, ranching, all the kind of consumptive industrial uses of federal lands that are in competition, in some sense, with the conservation of the species.”