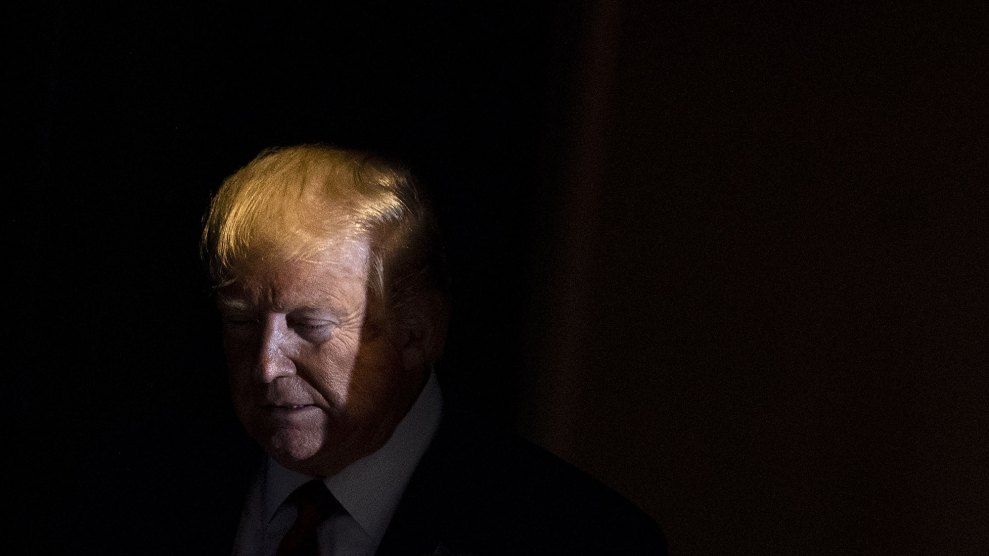 According to multiple news reports, President Trump has attempted to coerce the president of Ukraine into working with his personal attorney, Rudolph Giuliani, to investigate a political opponent, Democratic presidential frontrunner Joe Biden, and his son, Hunter Biden. To pressure the Ukrainian president, Trump withheld hundreds of millions in military aid until earlier this month. In one phone call in July, Trump reportedly pressed the Ukrainian president to investigate Biden’s son about eight times. The full details of the allegations, outlined in a whistleblower complaint that the Trump administration is currently withholding from Congress, are still unclear, but the emerging consensus is that, if true, the reported abuses surpass even those outlined in the Mueller Report on Russian interference in 2016.

“The current whistleblowing allegations, however, are even worse” than the conduct detailed in the Mueller report, Republican lawyer and Trump critic George Conway wrote in a Friday evening Washington Post op-ed co-written with Neal Katyal, former acting solicitor general in the Obama administration. “Unlike the allegations of conspiracy with Russia before the 2016 election, these concern Trump’s actions as president, not as a private citizen, and his exercise of presidential powers over foreign policy with Ukraine.” Further, they noted, “the White House is trying to shut down the entire inquiry from the start — depriving not just the American people, but even congressional intelligence committees, of necessary information.”

It's not complicated. If the executive really did abuse his power to push a foreign government to knock out his political rival before the next election, that's either too much for you or nothing ever will be. Don't need a statutory citation. We're a free republic or we're not.

The allegation Trump and Giuliani are pushing against Biden—that his anti-corruption work as vice president, which included urging the firing of a former prosecutor general who had investigated a Ukrainian gas company that his son Hunter was on the board of—have been debunked. Daria Kaleniuk, an American-educated lawyer who founded Ukraine’s Anti-Corruption Action Center, told the Intercept that the former prosecutor was fired at Biden’s urging because he failed to investigate corruption thoroughly and in fact stifled investigations.

Biden fired back at Trump on Friday night. “If these reports are true,” he said in a statement, “then there is truly no bottom to President Trump’s willingness to abuse his power and abase our country.”

If these reports are true, then there is truly no bottom to President Trump’s willingness to abuse his power and abase our country. pic.twitter.com/PblNGDarXU

On Saturday morning, Trump sent off a string of tweets claiming, in language that sounds a lot like his tweets against the Mueller investigation did, that the real scandal is Biden, the “Fake News Media,” and the Democrats. He characterized his own conversations with Ukraine’s president as “perfectly fine and routine.” This scandal, he says, is also a witch hunt.

The Fake News Media and their partner, the Democrat Party, want to stay as far away as possible from the Joe Biden demand that the Ukrainian Government fire a prosecutor who was investigating his son, or they won’t get a very large amount of U.S. money, so they fabricate a…..

….story about me and a perfectly fine and routine conversation I had with the new President of the Ukraine. Nothing was said that was in any way wrong, but Biden’s demand, on the other hand, was a complete and total disaster. The Fake News knows this but doesn’t want to report!

Now that the Democrats and the Fake News Media have gone “bust” on every other of their Witch Hunt schemes, they are trying to start one just as ridiculous as the others, call it the Ukraine Witch Hunt, while at the same time trying to protect Sleepy Joe Biden. Will fail again!

Trump may convince his fans. But in Ukraine, his efforts are transparent. “Trump is now looking for kompromat to discredit his opponent Biden, to take revenge for his friend Paul Manafort, who is serving seven years in prison,” a Ukrainian official, Anton Geraschenko, a senior adviser to the country’s interior minister, told the Daily Beast.