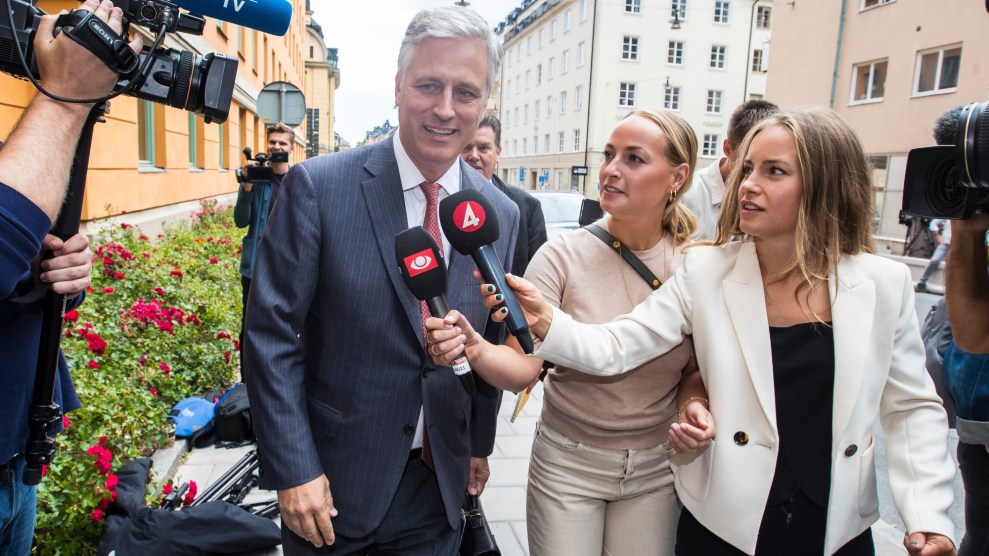 Robert C. O'Brien, the State Department's lead hostage negotiator, returns to the courthouse on the third day of the A$AP Rocky assault trial in Stockholm.Michael Campanella/Getty

Eight days after ousting John Bolton as national security adviser, President Donald Trump named the State Department’s top hostage negotiator, Robert C. O’Brien, to the job. A former colleague of Bolton’s during the George W. Bush administration, O’Brien shares many of his hawkish views on China, Russia, and, especially, Iran, which has emerged as a central foreign policy concern since Trump left the 2015 nuclear deal negotiated by the Obama administration and installed a “maximum pressure” policy on the Islamic republic.

“There is simply no evidence to support the idea that we can trust revolutionary Iran to give up its long-term goal of developing a nuclear weapon and delivery systems,” he wrote in a 2015 National Interest article titled, “Obama’s Folly: The Iran Deal Disaster.”

“In addition to legitimizing Iran’s now supposedly ‘peaceful’ atomic program,” O’Brien added, “the deal will likely lead to a nuclear arms race in the Middle East.”

A key component of O’Brien’s frustration with the deal stemmed from the “tens of billions of dollars in sanctions relief” that Iran stood to receive once the Obama administration lifted its series of punishing sanctions. This financial windfall would be redirected to “Iranian proxies such as Hezbollah in Lebanon, the Assad regime in Syria, Shia militias in Iraq and Houthis rebels in Yemen, not to mention Hamas in Gaza,” he wrote, echoing Bolton’s harsh rhetoric about non-state actors aligned with Iran.

Trump has made no secret of his disdain for Obama’s deal, but still voiced support earlier this month for a $15 billion bailout to assist the Iranian economy if it returns to compliance with the deal he spurned. At the G7 summit in France, Trump “seemed open to the idea of a financial bridge for the Iranians,” the New York Times reported. Given the devastating impact of American sanctions, which he reimposed and strengthened after abandoning Obama’s deal, Trump acknowledged to reporters that Iran might need a “short-term letter of credit or loan” that would “get them over a very rough patch,” a departure from his administration’s maximum pressure policy on the Islamic republic.

Before joining the Trump administration, O’Brien railed against the idea of paying Iran as a prologue to future negotiations. “Look, this regime has been a revolutionary regime since it took power in 1979,” he told radio host Hugh Hewitt in July 2015, when he was still advising Walker’s campaign. “The only thing that’s changed now is that their nuclear program has gone from the underground bunkers to the open. It’s legitimate, and we’re going to give them billions and billions of dollars to further that program, their weapons programs, and allow them to pump that money into their proxies, Hezbollah and Hamas.”

O’Brien’s tough talk on Iran will be tested in his new role. On Saturday, the Trump administration blamed Iran for a sophisticated attack on two Saudi Arabian oil facilities that “knocked out more than half the kingdom’s oil output for days or more,” the Washington Post reported. Iran’s foreign minister denied responsibility for the attack. The Houthis, a Yemeni rebel group backed by Tehran’s money and arms, took credit and warned of more in the future.

When Trump appointed Bolton last year, O’Brien praised him as “certainly the most experienced Republican foreign policy hand of our generation.” Bolton returned the love in a blurb for O’Brien’s 2016 book, While America Slept: Restoring American Leadership to a World in Crisis, which he called “required reading.” They’re also fond of the same allusions to world history. In O’Brien’s National Interest article, he invoked British Prime Minister Neville Chamberlain’s appeasement of Hitler in 1938 to denounce Obama’s deal. Earlier that year, Bolton said the deal “puts Obama in a category worse than Neville Chamberlain.”

Bolton, who once called for the US to preemptively bomb Iran, was a staunch supporter of the administration’s maximum pressure strategy, but clashed with the president over Trump’s recent desire to ease sanctions on Tehran in pursuit of a deal. His exit from Trump’s administration came just one day after a disagreement over Iran policy. “Bolton did not favor giving the Iranians relief and believed the maximum pressure campaign was working,” Axios reported.

Now O’Brien will be tasked with advising Trump on Iran policy even though he, like Bolton, has argued against paying adversaries, such as Iran, as part of negotiations. In an op-ed published last year by the Hill, O’Brien said “paying millions or even billions of dollars” to “terrorists and pariah states” only encourages “more kidnapping, more pain and more suffering for Americans.” While written in the context of hostage negotiations, not negotiations over Iran’s nuclear program, O’Brien’s article suggests he is more aligned with Bolton’s instincts on Iran than with Trump.